During the 2008 Democratic primaries, I had a lot of success in forecasting outcomes from state to state based solely on demographic variables. Those projections did slightly better than the polls, although that was a low bar to clear because the polls had a lot of misses that year.

Some readers have asked why I haven’t done the same thing this year. The reason is that the 2008 Democratic contest was uniquely well suited to this sort of analysis, while this year’s Republican race is a bad fit for it.

The 2008 race became a two-person contest between Barack Obama and Hillary Rodham Clinton almost immediately after Iowa. It’s much harder to make these projections when more than two candidates are involved, as in the race this year.

And the 2008 Democratic nomination was in some ways remarkably stable. Mrs. Clinton led in essentially every national poll conducted before Iowa. Mr. Obama overtook her at some point in mid-February. Mr. Obama’s lead fluctuated a little bit after that — he was essentially tied with Mrs. Clinton at his worst moments and about 10 points ahead of her at his best ones. But the February shift was the only clear lead change in the national polls. 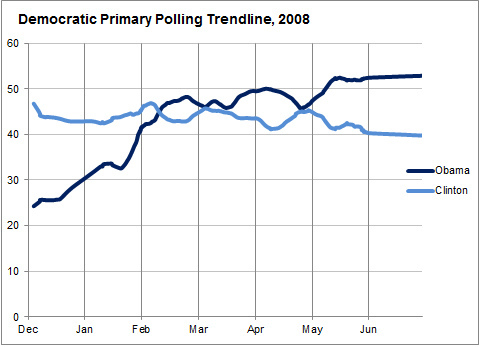 Yes, the split between Mr. Obama and Mrs. Clinton manifested itself in different ways in all different states — precisely the reason that demographic analysis proved valuable. But results that seemed hard to explain at first became more understandable later on. Mr. Obama won Iowa — and he won most of the states like Iowa no matter when they voted in the process. Mrs. Clinton won New Hampshire — and almost all of the other states that shared similar demographics. There were a few anomalous results — Mr. Obama won Connecticut but none of the states that surrounded it, and Mrs. Clinton did the same in South Dakota — but not many.

In contrast, there have been 10 separate Republican candidates who have led in at least one national poll at some point in this nomination cycle (counting a few candidates who decided not to run officially). They are, in alphabetical order: Michele Bachmann, Herman Cain, Chris Christie, Newt Gingrich, Rudy Giuliani, Mike Huckabee, Sarah Palin, Rick Perry, Mitt Romney and Donald Trump. They may soon be joined by an 11th candidate, Rick Santorum, who is likely to lead in a new Public Policy Polling survey that will be out soon.

Another distinction is that the demographic patterns that shaped the Democratic race were relatively crisp. The most relevant were probably race, gender, age and education levels, in about that order. None of those characteristics are highly correlated with one another, which makes statistical analysis much easier.

This year, things are blurrier. Mr. Romney appears to be relatively weak among voters in the following categories: evangelical Christians, lower-income voters, rural voters, voters who identify themselves as “very conservative” and Tea Party supporters. He also seems to be weaker in the Midwest and the South than in the West and the Northeast. But most of these characteristics are very strongly correlated with one another: more evangelicals live in the South, rural voters tend to have lower incomes than suburban ones and so forth.

It is very hard to untangle all of that unless you have a lot of data. Sean Trende at Real Clear Politics has uncovered some interesting results by looking at data at the county level, as has Seth Masket, and I am going to post an analysis soon about the states where Mr. Romney appears to be the strongest and weakest. It’s worth looking at this stuff — but probably more as a supplement to the polls rather than as a replacement for them.

And some results have been hard to explain by any measure. How in the world did Mr. Santorum get 10 percent of the vote in Nevada — but 40 percent of the vote in Colorado, just three days later? Colorado and Nevada are not exceptionally similar, and the candidates applied different strategies and resources in advance of the voting in these states, but the differences are almost certainly insufficient to explain the size of the discrepancy. If you exclude Mormons from the Nevada data, for instance, Mr. Santorum won about 12 percent of the vote there. That reduces the disparity between his Nevada and Colorado result to 28 percentage points from 30, which is no help at all.

So while there was no entrance poll data in Colorado and while Mr. Romney may have been more organized in Nevada, we can still probably conclude that voter preferences have been incredibly fickle in this primary season. I don’t think you can develop a successful theory about this race unless you assume that voters are changing their minds — a lot. Some demographic groups may be more inclined to support certain candidates than others — but there are a lot of swing voters, and they have been swinging.

That unpredictability makes a case for betting on Mr. Santorum, who is given just a 13 percent chance of winning the Republican nomination on the betting market Intrade right now.

If the Republicans were neatly coloring in the demographic and geographic lines — as Mrs. Clinton and Mr. Obama did — then the small lead that Mr. Romney enjoys in the delegate count so far would be more definitive. The eight states that have voted so far are a reasonably representative sample, so if demographics are destiny, you might be able to make some precise-seeming projections going forward.

If the map is more scrambled, however, those predictions have a greater margin of error. There might be 15 or 20 states that lean toward Mr. Romney and 15 or 20 that lean against him, but few are truly safe calls.

Instead, Mr. Romney’s lead is more like the one held by a driver leading the Indianapolis 500 — after six laps have been completed. It might be argued that he is the better driver or has the better car. But the physical lead itself is not worth very much. All sorts of crazy things happen when there are 33 cars on the track, and one poorly timed pit stop would be enough for him to relinquish his advantage.

We should have a clearer idea after Michigan and Arizona vote on Feb. 28. Both can probably be classified as “lean Romney” states — better than the median state, but not giving him as decisive an advantage as states like New Hampshire or Nevada.

The thing that should worry Mr. Romney is that Colorado would have been in the same category.

More broadly, Republicans have so far declined several opportunities to coalesce around Mr. Romney. They did not do so after he announced his candidacy, nor after Mr. Perry sunk in the polls, nor when Mr. Cain withdrew, nor after Mr. Romney’s apparent win in Iowa and actual win in New Hampshire. And after big wins in Florida and Nevada, he is struggling yet again.

Mr. Santorum is a fresher face, comparatively speaking. He clearly did not get much momentum from his strong showing in Iowa. But his Iowa surge had been largely confined to that state to begin with, and he was hurt by the fact that the next state to vote was New Hampshire, a bad fit for him culturally, as well as the fact that he was not announced as the actual winner until after the New Hampshire voting. On Tuesday, by contrast, he earned victories in three states, and he seems to be on the move in national polls as well.

But Mr. Santorum will not be as easy a mark for Mr. Romney as someone like Mr. Gingrich. The results in Florida had seemed to suggest that Mr. Romney could win a state any time he wanted to by blanketing it with advertising dollars. But almost all of those ads were negative, and almost all of them attacked Mr. Gingrich — most of them on his personal failings like his resignation from Congress and his ties to Freddie Mac.

Mr. Romney’s attacks on Mr. Santorum, by contrast, have focused on more venial sins: that he is a “career politician” who defended earmarks.

Meanwhile, Mr. Santorum closed strongly and outperformed his polls in several states so far, including Iowa, Colorado, Minnesota, Missouri and South Carolina (where he was projected to place fourth by the polls but finished in third). That could indicate that voters like Mr. Santorum the more they get to know him — indeed, his favorability ratings are strong among Republican voters — or that his supporters are more enthusiastic. Either quality would be an asset going forward, allowing him to win his share of close calls against Mr. Romney.

Thus, it seems at least possible that Mr. Santorum’s momentum will be more sustainable. To have a chance at winning in the delegate count, he will need to supplant Mr. Gingrich as Mr. Romney’s major rival in the South. The results in Missouri, a borderline Southern state where Mr. Santorum beat Mr. Romney by 30 points without Mr. Gingrich on the ballot, suggest that he could run strongly if Mr. Gingrich were to bow out.

It is certainly not a straightforward path, but nor is Mr. Romney’s at this point. And so far in this Republican race, betting on the underdog has yielded dividends.