When Anthony Grant was named the seventh Dayton men’s basketball coach in the last 70 years back in 2017, he inherited a winning culture but also a demanding assignment: To fill the shoes of Archie Miller, who in six seasons transformed a dormant program into a mid-major powerhouse that made four consecutive tournament appearances, including a berth in the Elite 8.

Three years later, and a few months after Dayton was picked to finish just third in the Atlantic 10 Conference, Grant is overseeing perhaps the best season in school history. The Flyers are ranked fifth in the polls, higher than they’ve been since the mid-1950s. With two overtime losses to Kansas and Colorado on neutral courts, they have yet to lose a game in regulation.

That a member of the Atlantic 10 is cracking the top 5 at all, let alone as the calendar nears March, is hardly conventional. Dayton’s the first to do it in 16 years. They’re also surprisingly thrilling to watch. Though the Flyers are winning with strong performances at both ends of the floor, it has been particularly thanks to a high-flying, historically efficient offense.

In a season with no shortage of turnover at the top, Dayton represents arguably college basketball’s most exciting ascension. And Obi Toppin, a gravity-defying redshirt sophomore, may be the season’s most exciting player.

If Dayton turns the NCAA Tournament into its personal trampoline in a few weeks like the second coming of Dunk City, it would be a continuation of their seasonlong performance and not some newfangled skill.

UD Arena is home to dunk evangelicals, where rims shudder when the Flyers take the floor. More than 15 percent of Dayton’s 2-point field goal attempts are dunk attempts, the largest dunk share of any team in the country. And among mid-majors since 2010, only Wyoming in 2015 exceeded that mark, according to BartTorvik.com.

A heavy majority of those throwdowns have come from Toppin, who some consider to be “Zion lite.” He went from not receiving any Division 1 scholarship offers out of high school to being projected as a future lottery pick and a Wooden Award candidate.1

Toppin has the ability to turn each possession into a feature on the Sprite slam cam. Last weekend, he broke his own school record for single-season dunks and moved into a tie with FiveThirtyEight favorite Udoka Azubuike for the most this season with 89. Nobody else on Dayton’s roster — not even 6-foot-11 inch Jordy Tshimanga — has thrown down more than 11.

And these aren’t your run-of-the-mill two-handed flushes. Within a three-minute span in the team’s win over Duquesne, Toppin caught and finished a reverse alley-oop and executed a flawless windmill along the baseline:

Holy crap, look at these 3 dunks from Obi Toppin. Dude just glides through the air pic.twitter.com/8ZTXr3iJYq

Toppin isn’t just a dunker. Although he eats at the rim, he’s become a more well-rounded offensive threat this season. Despite a steadier diet of 3-pointers this season, he’s still hitting them at an above-average clip of 37.8 percent. Toppin has shooting range and an off-the-dribble game to keep defenses from forming a wall under the basket; he can spot up, flash into the paint for midrange looks and bang in the post. Give Toppin a dribble-handoff and a runway to the basket, and you can practically guarantee 2 points.

With a positionless lineup that most frequently features the 6-foot-9 Toppin at point-center, there’s no team more dangerous inside the perimeter. Dayton shoots 62 percent on 2-point field goal attempts, nearly 5 percentage points clear of the next-best team. The Flyers are elite in the halfcourt, but — in keeping with their dunk-happy mentality — they love to get out and run on the break. Dayton ranks in the top 50 in transition frequency and in the top 25 in transition scoring efficiency. 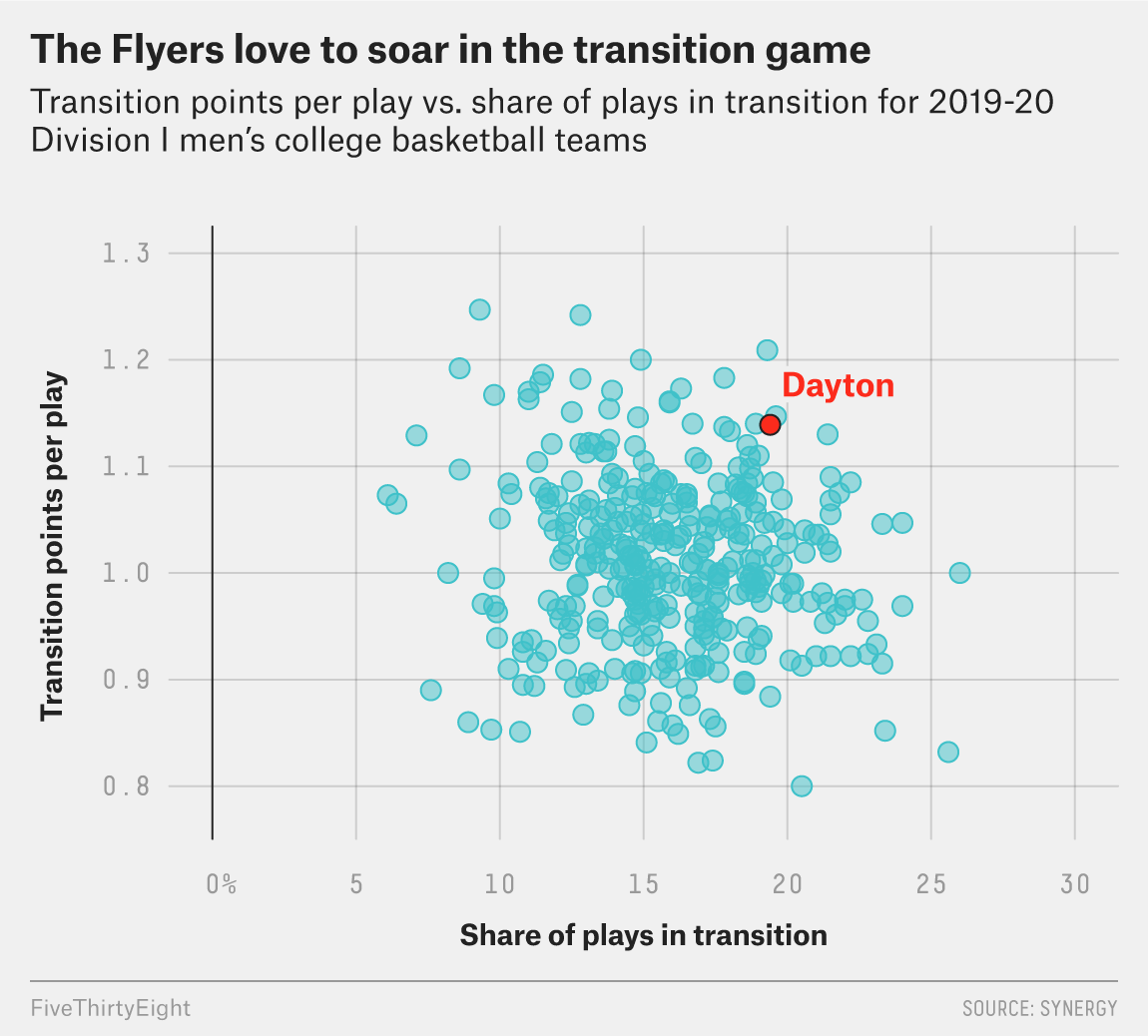 Most of Grant’s roster can hurt a defense from the perimeter, too. Five Flyers are attempting at least two 3-pointers per game while shooting at least 34 percent. And this season’s performance is no outlier for Grant, who is shepherding his third consecutive top-25 shooting team at Dayton. With firepower along the perimeter, the Flyers excel when they fan the floor, unwilling to let the shot clock dictate their actions.

Like Mark Few at Gonzaga, Grant also implements a ball-screen continuity structure, which puts endless pressure on the defense by running nonstop screens and effectively creating a perpetual two-man game.

One might think that Dayton would isolate the one-man freight train that is Toppin more often. But the Flyers deftly share the ball, assisting on more than 60 percent of made baskets.

This may bode well for Dayton’s tournament success. While it’s nice to have a go-to scorer, each of the last five national champions had a team assist percentage of 53 or greater.

All of these factors have given Dayton an efficient shot profile that consists primarily of 3-pointers and looks at the rim. As a result, the Flyers are scoring 118.3 points per 100 possessions after adjusting for schedule strength, a tick below Gonzaga for the highest mark nationally. Dayton is also shooting an eye-catching 59.3 percent from the field; only three tournament-qualifying teams over the last two decades have exceeded that clip,2 and two won national championships.3

Maybe it isn’t terribly surprising that Toppin, whose father was nicknamed “Dunkers Delight” and used to dominate games at Rucker Park, would one day grow up to be the country’s preeminent high-flyer. That a notable story is coming out of Dayton, Ohio, isn’t surprising, either. But this is barely-trod territory for the Atlantic 10, which has been to the Final Four precisely once over 43 seasons.

Armed with one of the most efficient, exciting attacks in the nation, Dayton’s sights are set even higher. “We feel like we can go and win a national championship,” Jalen Crutcher told The Associated Press last weekend. “We talk about that a lot.” Leave it to the team most comfortable in the stratosphere to have its sights set high.