With apologies to The Raconteurs, the presidential race continues to be “steady as she goes,” with little sign of tightening despite a plethora of new polls. FiveThirtyEight’s presidential forecast gives Joe Biden an 89 in 100 shot at winning the election, while President Trump has just an 11 in 100 chance. This makes Biden the favorite, but still leaves open a narrow path to victory for Trump, for whom a reelection win would be surprising — but not utterly shocking.

At the same time, we also have fewer polls from live-caller surveys, which have historically been more accurate and have shown slightly better numbers for Biden, than polls that use other methodologies, such as polls conducted primarily online or through automated telephone calls. Nevertheless, while the overall picture has shifted only a little in recent days, a few battleground states have seen at least some movement in their polls, which has slightly altered the odds Biden or Trump wins in each of those places.

For instance, we’ve gotten three new high-quality polls today from Florida that were in the field through at least Tuesday, and although these polls have helped Biden a tad, they actually tell a pretty mixed tale compared to each pollster’s last look at the Florida situation. For instance, NBC News/Marist College gave Biden a 4-point lead, 51 percent to 47 percent, which was a narrow improvement for Biden from the tied race Marist found in early September. However, Quinnipiac University found Biden ahead by just 3 points, 45 percent to 42 percent, which marked a sizable slide from the 11-point edge it gave Biden in early October.

And yesterday, Reuters/Ipsos also reported a small downturn in Biden’s numbers, as their poll found him up by 2 points, 49 percent to 47 percent, a slight tick down from his 4-point lead about a week ago. Bottom line: Florida is close, like it always seems to be. 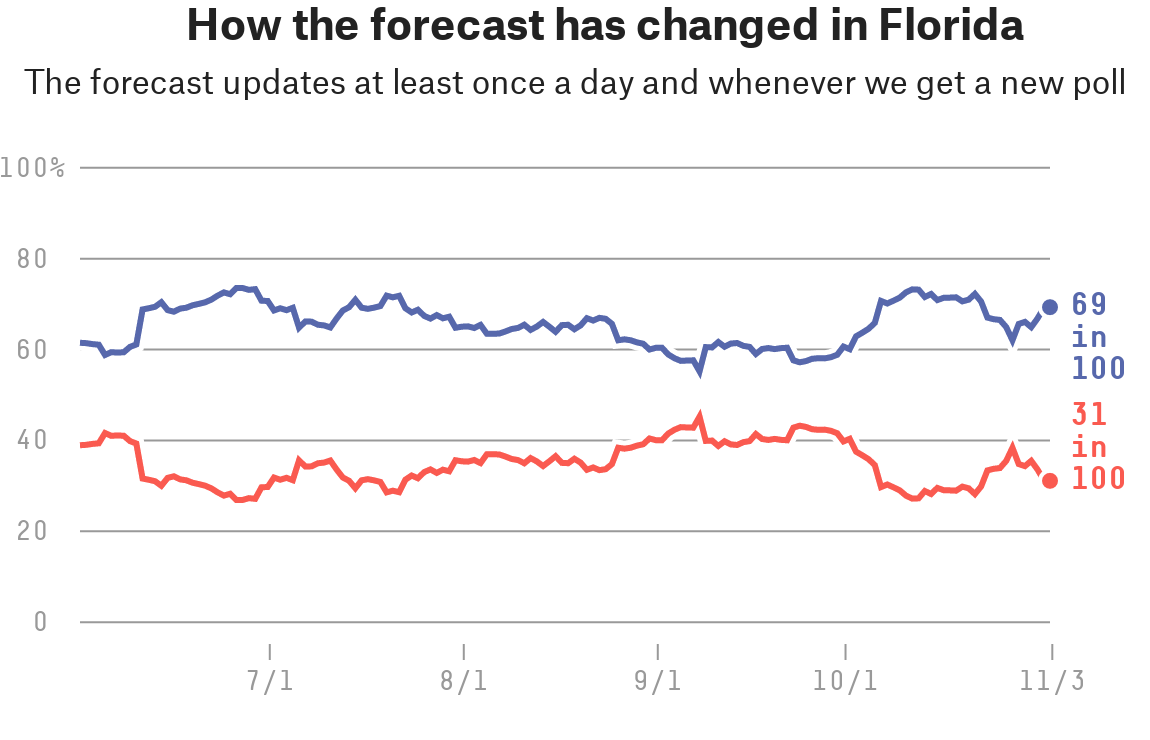 From Florida, we can slide our gaze north of the St. Mary’s River to look at Georgia, where we’ve actually seen a more sizable shift in Biden’s direction over the past few days. Biden now has a 57 in 100 chance of winning Georgia, up from 46 in 100 on Monday. This is important because Georgia is a state that Trump absolutely must win to have any chance of victory — in fact, he wins in less than 1 percent of the scenarios in which Biden carries it. 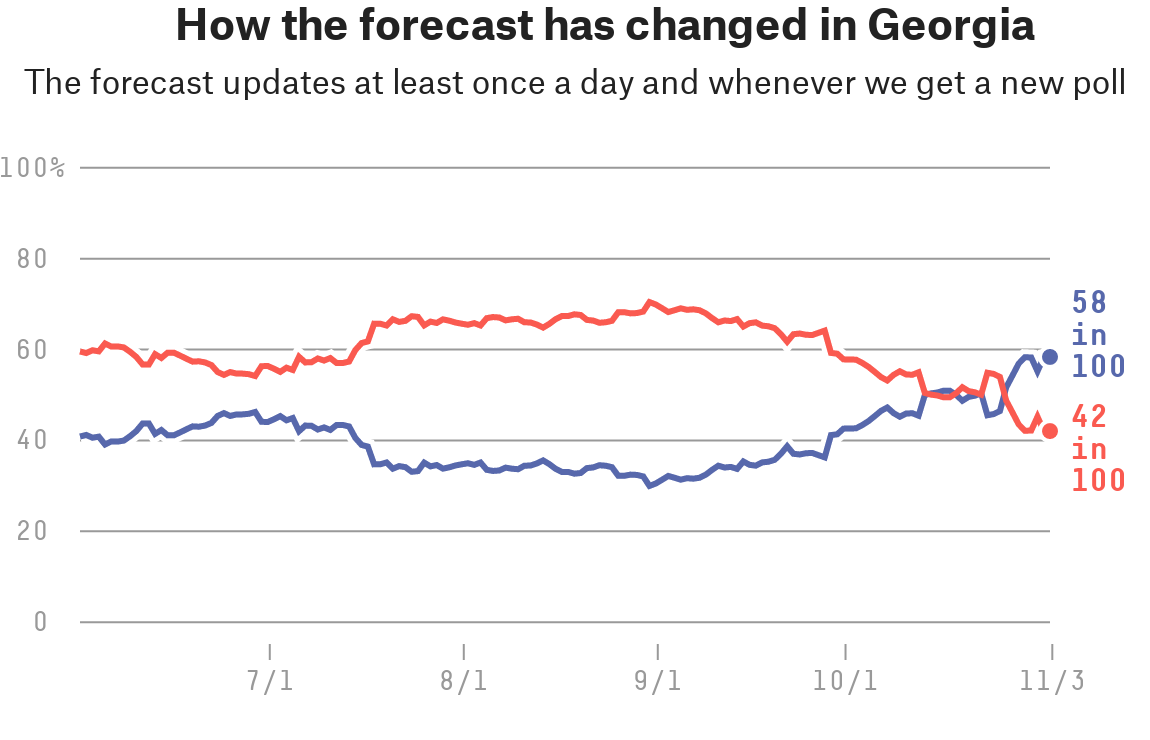 We have one new poll today that largely aligns with recent polling that has boosted Biden’s chances in Georgia. Democratic pollster Public Policy Polling put Biden ahead by 2 points, 48 percent to 46 percent, essentially the same as what the pollster found in early October. Meanwhile, Monmouth University released a Georgia survey yesterday that gave Biden a 2-point or 4-point lead, depending on projected turnout among likely voters, which marked a swing from the pollster’s mid-September poll that had Trump ahead by 2 or 5 points, again depending on turnout. But the short of it in Georgia is that results showing Biden slightly ahead or tied with Trump have become more common. In fact, Trump has only led in two Georgia surveys out of the 13 released in the past 10 days.

Ohio is another state where Trump seemed to have a slight edge, but is now more of a toss-up as our forecast has swung toward Biden and gives both candidates a 1 in 2 shot of winning it. 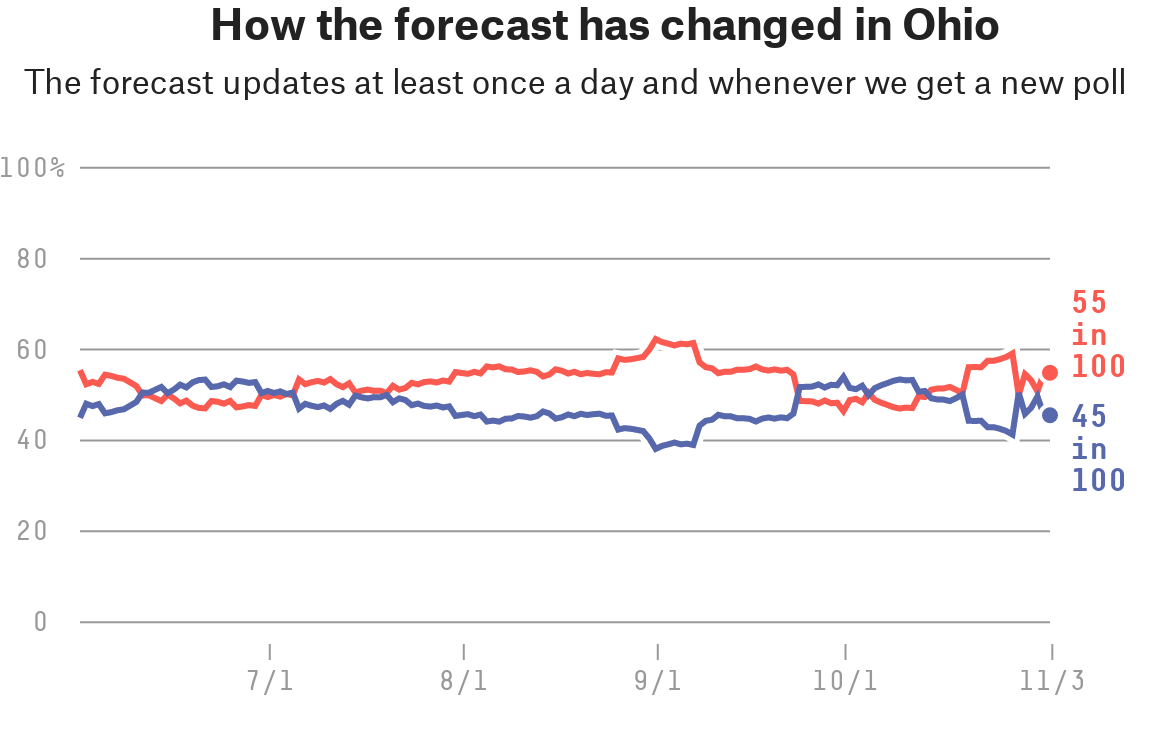 Two new polls out today precipitated this shift toward Biden, moving the state’s polling average from a 2-point Trump lead to a tie. Most importantly, Quinnipiac University found Biden up by 5 points, 48 percent to 43 percent, which was a fairly substantial improvement for Biden from Quinnipiac’s last survey in early October that had him up by just 1 point. That poll was the main driver of the shift today in Ohio. Because not all of the news was good for Biden in Ohio. Gravis Marketing found Trump ahead in their latest poll, 49 percent to 47 percent. (This was Gravis’s first public poll of Ohio.)

However, some other key states haven’t seen much movement despite new polling. For example, we’ve seen a couple of new polls in Pennsylvania since late yesterday that both give Biden a lead in the mid-to-high single digits, and one was even a high-quality live-caller poll, which we’ve lacked here to some extent. But they didn’t change the forecast’s outlook: Biden still has a 86 in 100 chance of winning there. 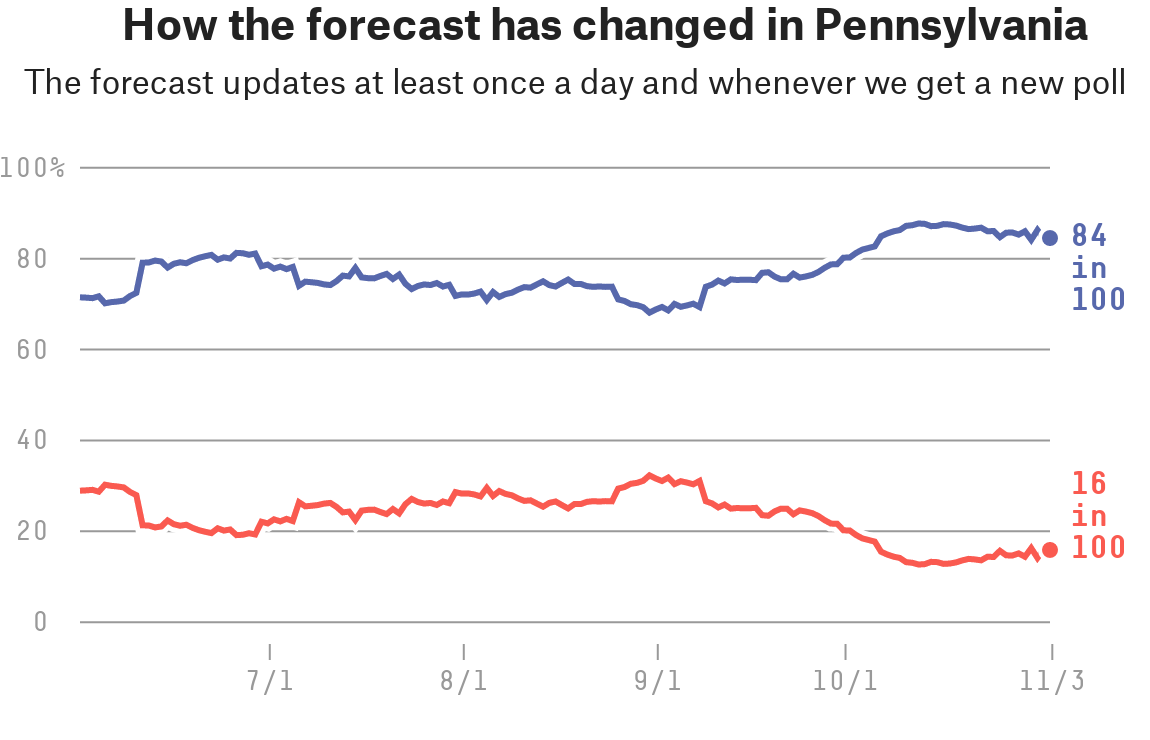 Neither new poll showed much of a change from its previous Pennsylvania survey either. The aforementioned live-caller survey from Quinnipiac University that came out today found Biden up 7 points, 51 percent to 44 percent, but that was practically identical to what it found in the middle of October. Similarly, PoliticalIQ/RMG Research’s new survey gave Biden a 6-point advantage, 51 percent to 45 percent, the same margin the pollster found in early October.

We’re watching Pennsylvania especially closely, as any movement here matters a lot in our forecast, as it’s the state currently most likely to decide the Electoral College. And the margin as it currently stands leaves room for Trump to win on Nov. 3 — or after, as it might take a bit to get the final result there.

Like Pennsylvania, North Carolina is another state where the forecast has hardly budged in the past few days. Biden now has a 65 in 100 shot of carrying the state, but it’s been around that mark since last weekend. 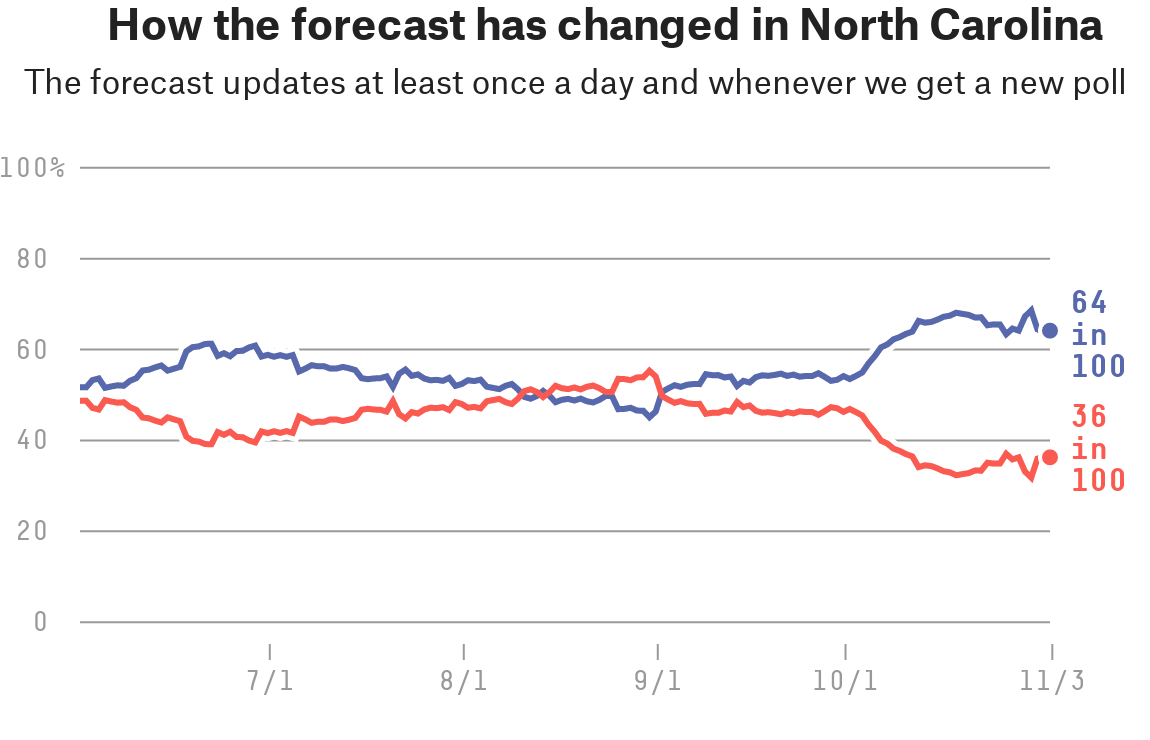 In fact, two new polls released today showed essentially no movement compared to each of the pollsters’ last surveys in North Carolina. The New York Times Upshot/Siena College found Biden ahead by 3 points, 48 percent to 45 percent, pretty similar to the 46 percent to 42 percent edge they gave him in mid-October, but now with fewer undecided voters. Meanwhile, UMass Lowell found the two candidates knotted at 48 percent apiece, which was pretty much the same as a late September poll that found them tied at 47 percent.

On the whole, the topline numbers in this race haven’t changed much. On the one hand, that’s good news for Biden as he remains a favorite to win the presidency. That is, if the polls mostly hold where they are, it will take a sizable polling error for Trump to win. However, Biden’s advantage would be more concrete were his position in Pennsylvania to improve in the closing days of the campaign. So we’ll just have to see if anything shifts in the final days that changes the trajectory of the race.