For decades, the battle to win football games has pivoted on the battle to win the passing game. The connection between winning and net passing yards per pass play — that is, outgaining your opponent on passing yards minus sack yards lost per pass play — has been well known in football circles since the 1960s, when it was introduced to the world by the late Bud Goode, a TV executive with a passion for math and statistics who shared his work with a number of teams and coaches. The statistic, along with turnover differential, is one of the most predictive of success in football.

By net passing yards per pass play alone, the San Francisco 49ers, not the New England Patriots, are the best team in football. After their 20-7 demolition of Jared Goff and the Rams on Sunday in Los Angeles, their performance, according to the metric, is at a level of excellence rarely seen in the NFL over a full season.

Behind Jimmy Garoppolo’s passing and a stout defense, the 49ers are 3.1 yards per pass play in the black, well ahead of the second-place Patriots and more than twice as dominant as 27 other teams. They held the Rams and Goff to 48 net passing yards on 28 pass plays, or 1.7 yards per pass play, while gaining 6.6 yards, for a difference of 4.9. The 49ers, by the way, lost the turnover battle 2-to-1.

To get a sense of how rare the Niners’ feat is, only one team has approached their current mark for a full season since at least 2001, according to ESPN Stats & Information Group: the 2001 St. Louis Rams, who went 14-2 and lost the Super Bowl to the Patriots. And only 13 teams out of 575 from 2001 to 2018 have finished a positive differential of least 2.0 net yards per pass play for a full season. That’s 2.3 percent of teams. The combined record of these 13 teams elite at winning the passing battle? 164-44 (.788). 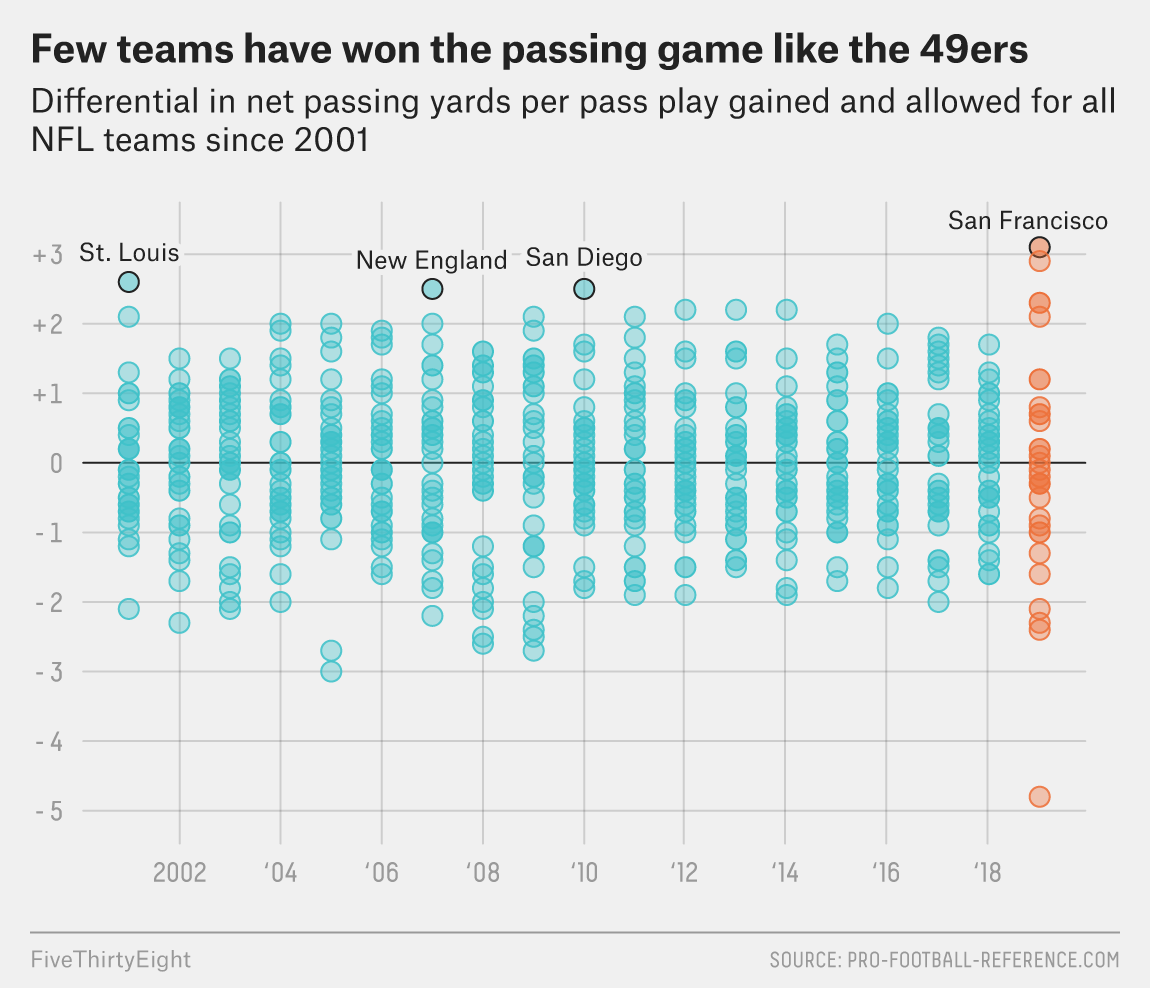 This edition of the 49ers is the first to go 5-0 since 1990. But the franchise is a storied one, having won five Super Bowls. So how does this year’s team stack up against those previous champions?

Can the 49ers sustain this level of dominance? Ideally, a team’s passing differential would be built more on a foundation of offense than defense, since defense is less reliable. While the 49ers rank second in limiting yards per pass play (4.4), they are no slouches in gaining these yards, either, ranking fifth (7.5). So both units would have to regress a fair amount to push the team below a level of 2.0 net yards — a mark that, on average, results in a 12-to-13-win season.

The biggest toss-up of the week involves the surging Texans and the surprising Colts, in a game that could have big repercussions for the AFC South. Houston has the advantage under center with Deshaun Watson playing like a superstar,2 and we currently give the Texans a 63 percent chance to win the division (compared with 29 percent for Jacoby Brissett and Indy). But if the Colts win at home on Sunday — and we give them a razor-thin edge — Indianapolis would suddenly become AFC South favorites, with a 47 percent chance (compared with 44 percent for Houston). It’s not outside the realm of possibility: Brissett has played surprisingly well this season in relief of the retired Andrew Luck, rising to No. 18 in our Elo QB rankings, and the Colts last knocked off the Kansas City Chiefs before a bye last week. Either way, the time for Indianapolis to make its move is now. The Texans could effectively put the South away with a win here, grabbing an 84 percent division win probability and knocking the Colts’ playoff odds down to about 1-in-3.

Whenever the Eagles and the Cowboys face off, things are sure to get testy. That could especially be the case in this week’s hugely important prime-time game, featuring a pair of 3-3 teams desperately trying to make sense of their respective seasons. After a 3-0 start, Dallas looked like the class of the NFC, but a three-game skid has sent the team’s Super Bowl odds tumbling from 8 percent to 2 percent. QB Dak Prescott is still playing pretty well, but the Cowboys need to fix their defensive problems before it’s too late. Meanwhile, the Eagles have their own issues to sort out on D — specifically against the pass — after being exposed by Stefon Diggs and the Vikings last week. Philly still ranks highly in our Elo ratings (No. 9 after including Carson Wentz’s QB adjustment), but the Eagles’ inconsistency this season has been maddening. Now, the two teams meet at the crossroads, and it’s not hyperbole to say this game could determine the fate of the NFC East, especially with their division-mates in New York and Washington posing little threat. If the Cowboys win, they’ll have a 58 percent chance of taking the division, with Philly at only 37 percent; if the Eagles win, their division odds would soar to 81 percent, dropping Dallas down to just 15 percent.

FiveThirtyEight vs. the Readers

As a weekly tradition here at FiveThirtyEight, we look at how our Elo model did against everybody who made picks in our forecasting game. (If you entered, you can find yourself on our leaderboard here. I am currently in 1,059th place!) These are the games in which Elo made its best — and worst — predictions against the field last week:

The readers had a great week … aside from one very bad game. They were right to be bearish about the Chargers (who lost to the Steelers at home) and the Rams (who lost to the 49ers at home), and they were more confident than the algorithm that the Seahawks would beat the Browns (which worked out well in the end). But the prognosticators were undone by their faith that the Cowboys would beat the Jets. Although Elo expected the same outcome, it gave Dallas only a 58 percent chance of winning; the readers gave the Cowboys an average win probability of 75 percent, which cost them a massive 25.1 points, on average, in the contest. That was enough to put Elo over the top, giving the system the win by a margin of 24.6 points over the average reader.

Still, congratulations to Christopher Moehle, who led all (identified) readers in Week 6 with 122.0 points, and to Jamie Porter, whose total of 416.8 points once again leads the full-season contest. Thanks to everyone who played — and if you haven’t, be sure to get in on the action! You can make picks now and try your luck against Elo, even if you missed Week 6.