The year 1980 was one in which economic forecasting models were in agreement that the economy had slumped too significantly to allow President Jimmy Carter to win re-election. Unemployment was at 7.5 percent and inflation was at 9.7 percent. Per-capita GDP and disposable income growth, adjusted for inflation, had been negative over the course of Mr. Carter’s term. The economy was officially in recession for much of the election year.

But Mr. Carter — despite approval ratings in the 30s or low 40s — was holding his own against Ronald Reagan. Some polls, even well after Labor Day, showed the horse race to be tied or even had Mr. Carter with a slim lead.

Mr. Reagan would win overwhelmingly, however, claiming 44 states (even Massachusetts and New York) while limiting Mr. Carter to just 41 percent of the vote. He surged in the final week of the campaign after he posed the following question to Americans in the presidential debate of October 28, the first and only such event in which he and Mr. Carter participated together:

“Are you better off than you were four years ago?” Mr. Reagan asked, dwelling on Mr. Carter’s economic and foreign policy failures. Voters decided that they weren’t, and Mr. Reagan became the 40th president.

This is one of the few stories which satisfies both those who take a more deterministic view toward presidential elections and those who instead see the results as more malleable based on the skills and qualifications of the candidates. For the former group, it is proof positive that the “fundamentals” catch up with a candidate sooner or later; for the latter, it is a testament to Mr. Reagan’s political acumen.

I take the middle view here — the fundamentals matter, but campaigns do, too. Many of these models, besides, are predicting a very close election — while the consensus view of economists is that although another recession is unlikely, the recovery is likely to proceed in fits and starts.

Against this background, it’s worth considering the argument that President Obama and the Republican nominee will have about the state of the economy — and how the focal point of the electorate may change as we move into an election year.

Mr. Obama’s approval ratings are relatively strong given the sour mood of the country. An average of current polls has them at about 50 percent and although they may be somewhat inflated because of the killing of Osama bin Laden, even at their nadir they were not much lower than 45 percent. (Although this could easily change, for the time being Mr. Obama remains the first president since Dwight D. Eisenhower to have never seen his Gallup approval rating drop below 40 percent.)

By contrast, most polls show that a significant majority of the country is dissatisfied with the condition of the country. Since 1974, CNN and Time Magazine have routinely posed a question in their polls that asks respondents to tell them “how well are things going in the country today”. So far this year, an average of 39 percent of respondents have said things are going “very well” or “fairly well”, while an average of 60 percent have said they’re going “pretty badly” or “very badly”. By contrast, Mr. Obama’s approval has averaged 52 percent so far this year in CNN surveys, against 46 percent disapproval.

Usually, CNN’s presidential approval ratings and the “going well” question are in better alignment with one another. In the chart below, I’ve plotted the annual averages for these figures from CNN and Time polls for all years since 1974. (Gallup approval ratings are substituted for CNN/Time data prior to 1993 as I don’t have their approval ratings handy prior to that year.) The first three years of Mr. Obama’s term are represented by the red data points. 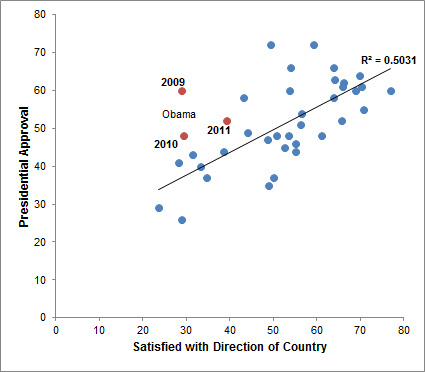 All three of Mr. Obama’s numbers are considerably above the regression line formed from the other presidents. That is, his approval ratings are higher than they “should” be based on the mood of the country. In a year like this one, for instance, where just 39 percent of people think things are going at least fairly well in the country, we’d expect the president’s approval rating to be closer to 40 percent than 50 percent.

Some of this is explained by the fact that Mr. Obama is relatively new to the White House. The second chart, below, is based on a regression equation which attempts to predict presidential approval based on CNN’s mood-of-the-country question, plus the number of years that the president has occupied the White House. For each year that he serves, a president’s approval rating declines by roughly 2 points holding the mood of the country constant — that is, voters hold the president to a higher standard the longer that he’s been in office. 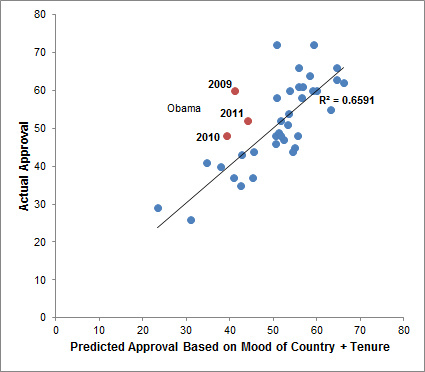 Even with this adjustment, however, Mr. Obama’s approval numbers are overperforming. The equation would predict that Mr. Obama have an approval rating averaging 39 percent last year and 44 percent this year. Instead, those numbers in CNN’s polls have been 48 percent and 52 percent, respectively.

So what does this mean? It may mean that voters are in fact cutting Mr. Obama quite a bit of slack for the difficulties he inherited from President George W. Bush. (In another CNN poll conducted last month, just 33 percent of respondents placed more blame on Mr. Obama and the Democrats for the direction of the economy, while 55 percent blamed Mr. Bush and the Republicans.) It may also mean that Mr. Obama is benefiting from strong personal favorability ratings: he’s always scored pretty highly when voters are asked questions like whether he is a “strong and decisive leader”, whether he “cares about people like you”, and whether he is likable.

The important question, though, is whether Mr. Obama can sustain those advantages as we head in to 2012. Here’s one reason to think that he might not: the “going well” number and presidential approval have historically come into much sharper alignment with one another in presidential election years. Here is a comparison of the two figures in election years only: 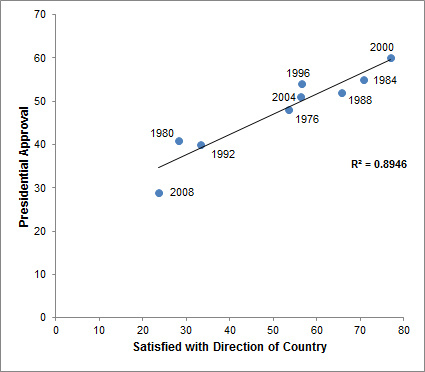 Note that the correlation has improved from moderately strong to near-perfect. Americans may think of their presidents in fundamentally different ways in election years, taking their president’s performance and their satisfaction with the direction of the country to be one and the same.

After all, if a good case can be made that things are going well in the country, the president can run commercials like Mr. Reagan’s “Morning in America” ads from 1984. But if the case is weak, you can be certain that the president’s opponents will be posing questions to the electorate much like the one that Reagan did in 1980. Note, for example, Tim Pawlenty’s recent video previewing his presidential campaign. Although there’s a lot of glossy biographical detail in the video, the punchline comes about 40 seconds in when Mr. Pawlenty stares at the camera and says “the truth is, our country’s in big trouble.” That is, of course, the fundamental argument that any competent opposition candidate will be making.

This is not to say Mr. Obama is doomed. He’s still a favorite, in my view, to be re-elected. Unlike Mr. Carter — who was almost as vulnerable on foreign policy as on domestic affairs because of the Iran hostage crisis — this category is a strength for Mr. Obama. At the very minimum, he’ll be able to cite the killing of Osama bin Laden. Depending on how things proceed over the next 18 months, he might also be able to note the winding down of the wars in Iraq, and possibly Afghanistan. While the political turmoil in the Middle East present risks to Mr. Obama, even something like the revolution in Egypt could be adopted as a point in his favor — a sign that the world is changing, and for the better.

In addition, Mr. Carter represents the only case since 1896 when a party ceded control of the White House in the next election after regaining it. Quite often, there there is something gone awry with the country when the White House changes hands (an economic collapse, an unpopular war, a crisis of confidence) and the incoming party is given more of a grace period to reconcile the country’s affairs.

If there is a credible case to be made that the economy is getting better — when coupled with what is likely to be a strong case on foreign policy — then Mr. Obama is likely to be given the benefit of the doubt by voters. But if you instead see the White House spending more of its time blaming Mr. Bush for the state of the economy, that’s a sign that they’re afraid of Mr. Reagan’s question — and may have reached a stage where they’re the underdogs in the race.