This year’s Major League Baseball trade-deadline fire sale mostly went to script, headlined by the Jon Lester/Yoenis Cespedes mega deal where the Oakland A’s and Boston Red Sox helped each other out in the usual fashion: One got to clear millions in salaries off the books while gaining a few parts, and the other obtained a high-impact starter for its championship run. The wrinkle in this case is that the team doing the dumping is big-market, big-payroll Boston, and the one gearing up for the post-season is small market, small-payroll Oakland.

For a good breakdown of this trade, see Jonah Keri’s piece in Grantland. Here’s a quote that had me laughing at my desk:

It’s hard to blame GM Ben Cherington for embracing the fire-sale approach. … Even if Lester leads the A’s to World Series glory, it still looks like the Sox made out like bandits in this deal.

So one team may substantially increase its chances of winning the World Series, while the other makes out like bandits! Keri is absolutely right though: The reason these fire-sale deals are so common is because they benefit both sides. When a team’s competing for the playoffs, winning now is much more valuable, and when a team’s out of contention, money is more valuable.

You know who understands this? Oakland General Manager Billy Beane. In competitive years under Beane’s tenure (when the A’s finished first or second in their division), the A’s have made July deals gaining them a net total of 9.61 wins above replacement (relative to the players they had to give away), while taking on an extra $16 million worth of salary for those years (of which, the A’s would pay a remainder, depending on the terms of the trade). Note: Yes, that is an pretty good money-to-WAR ratio, but it’s what would you expect. Conversely, in years when the A’s have not been in contention, Oakland has sold a net of 12.25 WAR, while shedding the remainder of $46 million worth of salary.

For the small-payroll team to be the fire-sale buyer is rare, especially with as large a pay gap as exists between the Red Sox and Athletics (more than $79 million). Since 1996, just $21 million worth of salary obligations (or remainder thereof) have gone to the small side of a payroll gap that big (about 1.2 percent of contract value for all trades conducted in the period), and those were offset by those teams shedding $109 million. In other words, poor teams typically trade big contracts for little ones.

That said, the Oakland/Red Sox deal isn’t unusual if we ignore payroll and just look at the standings. Oakland currently holds the top spot in the AL, the Red Sox are in 13th. For trades between teams with at least a 12-spot gap between them in the standings, $161 million in salary shifted to the better teams in exchange for just $7 million going the other way. Overall, the team with the better position in the standings has taken on about $1.35 billion dollars in salary while shedding just $413 million. Meaning, the lower ranked teams have netted nearly $900 million in fire-sale trades (almost triple what poorer teams have done).

Let’s look at this in chart form. I’ve plotted all the contracts traded in July from 1996 through 2013 (plus Lester’s) below, with the size of the players salary for the given season represented by area of the bubble: 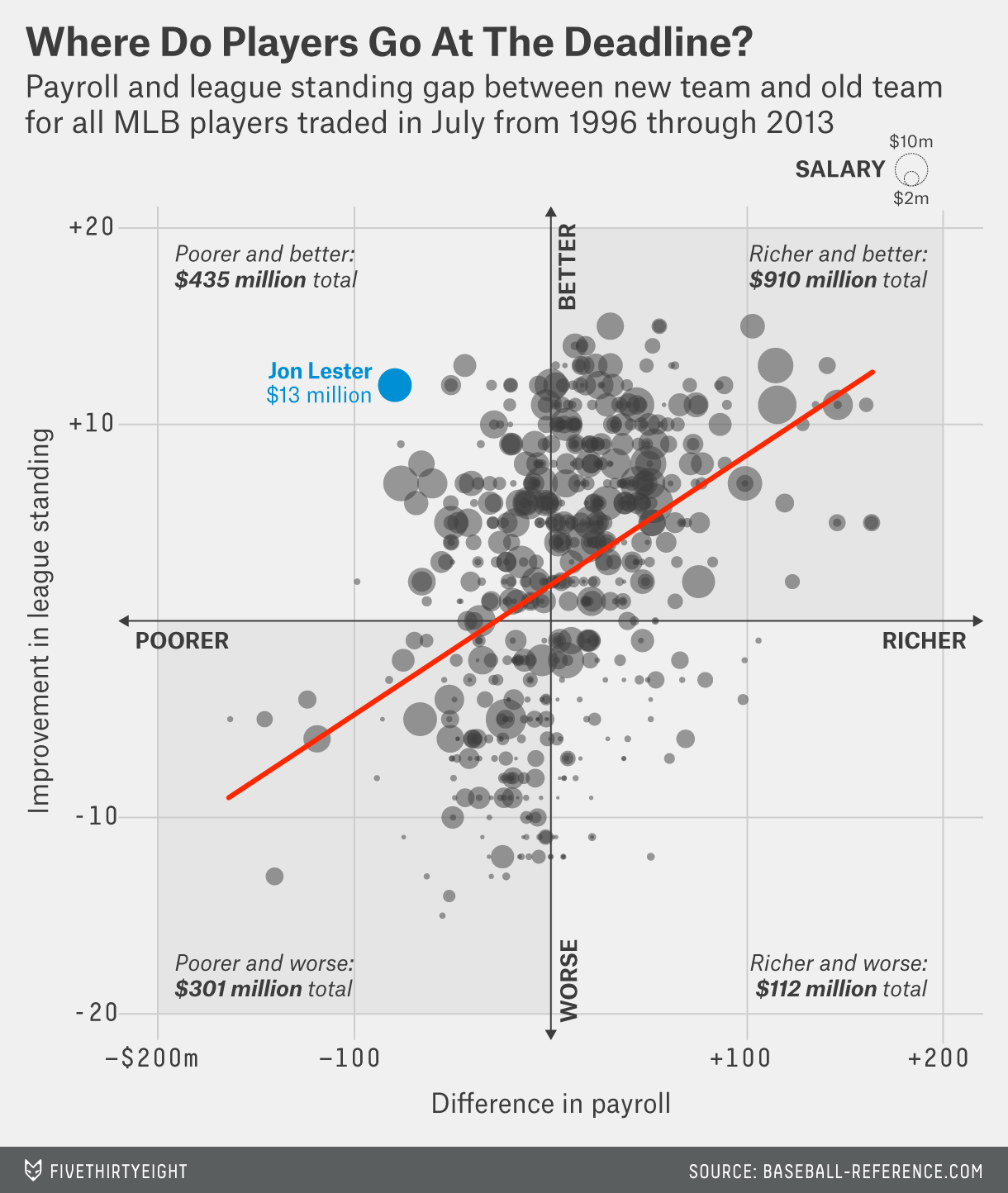 There are four quadrants representing the four basic types of trades. Quadrants kitty-corner from each other are essentially trade partners — e.g. when poor teams find themselves in the better competitive spot, they seem to be pretty willing to spend money to go after wins (435 million) and are even less willing to give away assets (112 million).

For fun, I ran a regression from pay gap and standings gap to the size of contract changing hands and found that pay gap is actually borderline insignificant after you account for standings (for fellow nerds: t-Stat of 6.5 for standings gap, just 1.6 for payroll gap).