Having worked for several years as the ticket taker at New York’s Cinema Village, Young Ma has seen all sorts of films come through the three-screen theater. He’s seen sparsely attended independent projects screen for one night only, and he’s seen “The Interview” draw lines around the block when Cinema Village was one of the few theaters willing to brush aside hackers’ threats and show the film. But “United Passions” left a unique impression on him. The distributors of the film about the origins of FIFA, which was reportedly made for somewhere around $27 million, booked the big theater — about 150 seats — and the film was shown four times a day for a week, starting on Friday, June 5.

“To be honest with you, nobody came,” Ma said. “I don’t think people cared.” Ma’s not quite right: People came — but hardly any. The Hollywood Reporter revealed that the film made $140 in its opening weekend at Cinema Village, meaning that, on average, every screening of the film had an audience of about one paying customer.1 I attempted to calculate interest in the film nationally, and it appears that “United Passions” packed the lowest rate of butts in the seats per screening for any film in the past 20 years.

The math isn’t complicated so much as it is shrouded in blind spots. Here’s what we know: The movie made $918 — total — in its opening weekend … and maybe nothing after that. All the reporting and most of the databases2 show it finishing with that figure. Most movies make 70 percent of their sales during the weekend,3 which would make the real tally for “United Passions” slightly more than $1,310 if it followed that pattern.

But even if we give the movie the benefit of the doubt and assume it made $1,310, it still opened in way more theaters than the other movies that grossed this little.

The Numbers (tagline: “Where Data and the Movie Business Meet”) has collected the domestic gross box office of every film it could get data on for the past 20 years and adjusted the numbers for inflation. Of the 10,257 films in its list, “United Passions” comes in 10,181st. None of the 76 films that grossed less than “United Passions” opened in more than five theaters. “United Passions” screened in 10. After reaching out to some theater operators and investigating movie listings, I found that those theaters were showing the film between four and five times per day for an entire week. So if we assume that the national average was 4.5 screenings per location per day, it would mean that “United Passions” earned roughly $4.20 per showing in the U.S.4 The lowest-grossing domestic release of all time, “Zyzzyx Rd,” took in about $5.10 per showing.5 As long as “United Passions” screened more than 3.67 times per location, on average, it was even less attended than “Zyzzyx Rd.” 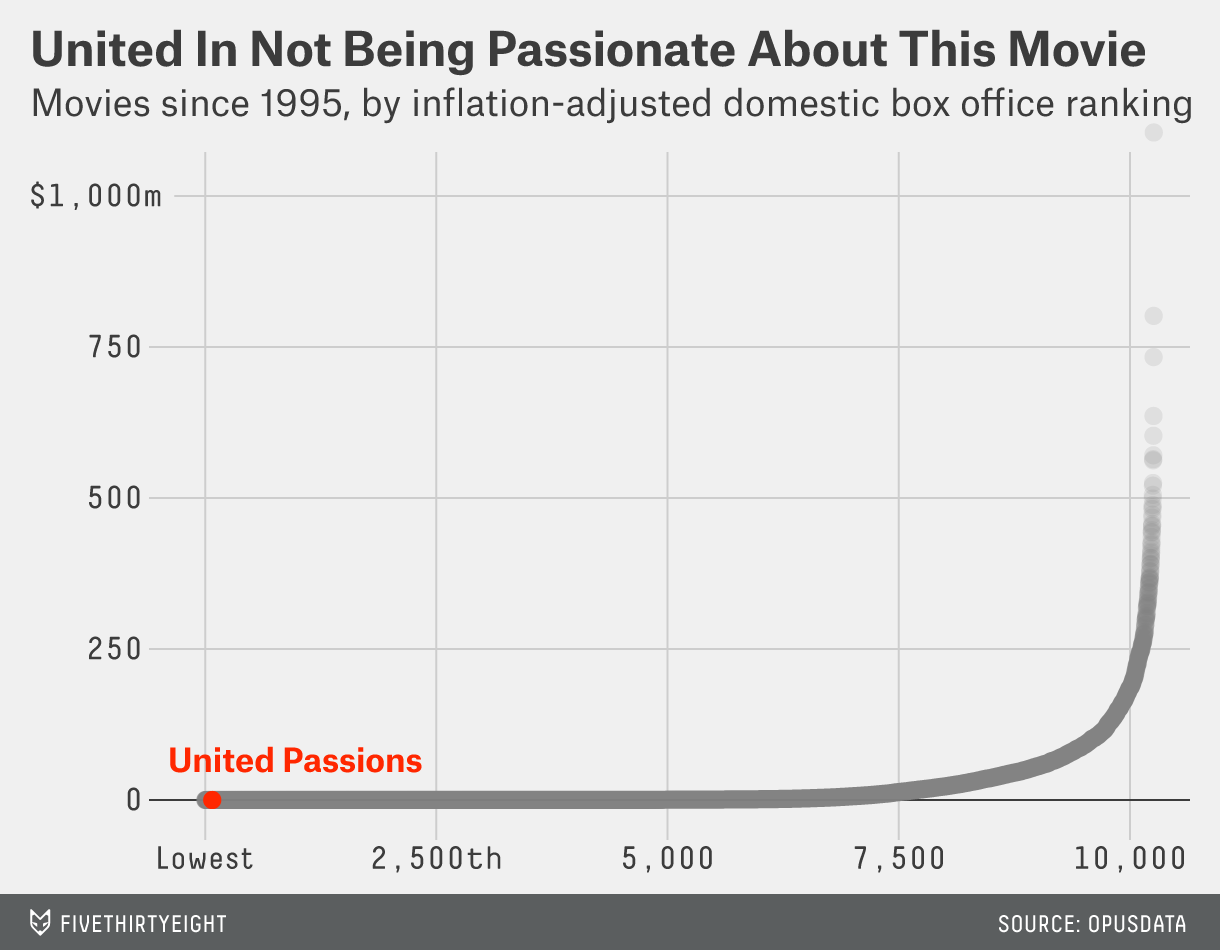 While most big-budget movies open to hundreds of screens, smaller films often experiment with a platform release, in which a movie tests the waters in major cities before expanding nationwide. Screen Media, the domestic distributor for “United Passions,” picked theaters that are consistent with that model, although 10 screens is a bigger rollout than most indies opt for. The business model for these types of releases varies widely, from a revenue split to a “four wall” deal in which the distributor basically rents the theater and keeps the receipts. It’s unclear what Screen Media did — after initially saying that he’d call me back, Screen Media’s vice president of business affairs, David Fannon, stopped responding to emails and calls.

“I’ve never gotten so many calls about such a small movie in my career,” said Paul Dergarabedian, senior media analyst for Rentrak, a real-time television and movie measurment service. Although the Hollywood Reporter referenced Rentrak as the source of its box-office numbers, Dergarabedian wouldn’t confirm them without permission from Screen Media. He did point out that the movie was simultaneously released as a video on demand, which may have hurt turnout. Because Screen Media hasn’t officially approved of the release of those VOD numbers, either, we don’t know. The movie did perform better — if not well — overseas, grossing roughly $178,000, according to Dergarabedian.

For many, the press’s full-pitch coverage of the extraordinarily low American box-office results was just the final helping of schadenfreude to pile onto this doomed movie and its subject, FIFA, the world governing body of soccer. The historical drama covers the evolution of the organization through the perspective of its leaders as they give earnest speeches and attempt to expand their reach for the good of the game. In the London Evening Standard, Des Kelly called the film “a sugar-coated pile of manure.” Tim Roth — who played FIFA’s now-disgraced president, Sepp Blatter, in the film — told the German newspaper Die Welt, “This is a role that will have my father turning in his grave.” The only star of the film who showed up for its screening at the Cannes Film Festival was Gerard Depardieu. Perhaps that’s because the artistic director of the film festival said that he only screened the film after Depardieu badgered him into it and that the film was never eligible for the Palme d’Or because it lacked the quality to be an official selection.

Then, on May 27 — just over a week before “United Passions” was to debut in U.S. theaters — FIFA officials were indicted on federal corruption charges right before the start of the organization’s annual conference. On June 2, Blatter announced his resignation. Three days later, the movie opened.

One theater owner noted the remarkable timing when discussing the film’s performance at his venue. “Anyone that has even a minor awareness could sense that something was going on,” said Greg Laemmle, president and CEO of Laemmle Theatres, which includes Los Angeles’s NoHo7, where the film was shown for a week. “But arrangements had been made months before.”

Dergarabedian, however, thinks that, if anything, the news around the scandal should have helped ticket sales. “‘United Passions’ was put in an unbelievable spotlight,” he said. “There was free publicity.” But because there was no discernable marketing push surrounding the news — perhaps because FIFA itself reportedly funded more than 75 percent of the film and had no interest in further embarrassing itself — the movie wasn’t able to take advantage.

The NoHo7 ended up being the top-grossing theater in America for “United Passions,” drawing in a reported $249 during its opening weekend. Laemmle chuckled and told me that he’d heard that his theater had come out on top. He said that sports films have a hard time drawing in audiences accustomed to consuming content on television but that he still felt there was a market for similar movies. “Under the right circumstances,” he said, “we’ll show something about the pioneering Rooney and Mara families in the formation of the NFL.” At the very least, it should be able to attract multiple moviegoers at a time.

Walt Hickey and Hannah Fingerhut contributed reporting for this article.