Here are the results for the eleven organizations that released polls of Great Britain in advance of yesterday’s general election, along with their sampling technique. 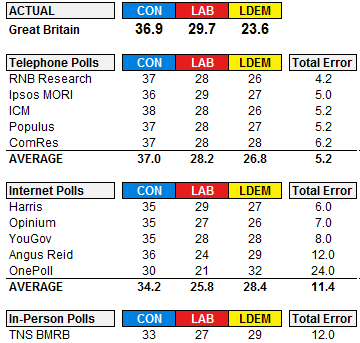 An error score is calculated simply by adding the difference between the projected and actual results for each of the three major parties. (It’s OK to do this in the UK because all pollsters allocate out undecideds rather than leave them be; in the United States, we’d tend to want to look more at margins.)

Nobody nailed this election, because everyone had the Liberal Democrats with at least 26 percent of the vote when they in fact finished with just 23.6 percent. That may not be the pollsters’ fault if voters changed or made up their mind while casting their ballots, as sometimes happens for third parties whose viability is questionable.

The closest was an Indian-based firm called RNB Research which had results of 37/28/26, but in general the telephone pollsters were closely bunched together. All but one of the pollsters had the LibDems trailing Labour, although always by small margins.

The performance of the Internet-based pollsters, on the other hand, was decidedly mixed. The more highly-regarded firms, Harris, Opinium, and YouGov, did OK, although Opinium and YouGov were marginally worse than any of the telephone pollsters. Angus Reid, on the other hand, just did badly, whereas a shop called OnePoll with a decidedly do-it-yourself feel produced a poll that was wildly inaccurate.

One firm, TNS BMRB, did in-person sampling; its performance was also subpar.

It is probably wrong to lump all the Internet polls together — I certainly root for the guys at YouGov, who are thoughtful and transparent. But at this point, the challenges facing Internet pollsters are relatively formidable. Moreover, the bias of the Internet polls — too many votes assigned to LibDems, who have younger and more-wired voters, and too few assigned to Labour, for whom the opposite is true — ran in exactly the direction that you might expect.

UPDATE: Opinium had originally been characterized as a telephone pollster; they are now properly classified as an Internet pollster instead.

Also, here is a simple visualization of the data, with the telephone pollsters indicated in black, the Internet pollsters in orange, and the in-person pollster in indigo. 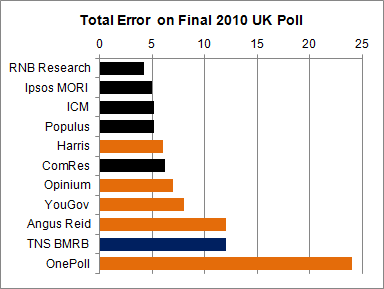