I just got into sailing this summer, and tonight, by sheer coincidence, I’ll be sailing out of Hyannisport. But I started sailing too late to make this year’s Figawi race, which takes place every Memorial Day weekend, as crews and their boats sail from Hyannis to Nantucket for a weekend of revelry to celebrate the start of sailing season, and then sail back.

Year in and year out, along with hundreds of other boats and thousands of fellow sailors, Ted Kennedy sailed Figawi in his schooner, Mya. The Cape Cod Times made a point to cover Kennedy’s 2008 sail across the Sound, not long after his brain surgery. (He actually missed the sail over to Nantucket, but made the return trip back to Hyannis.) 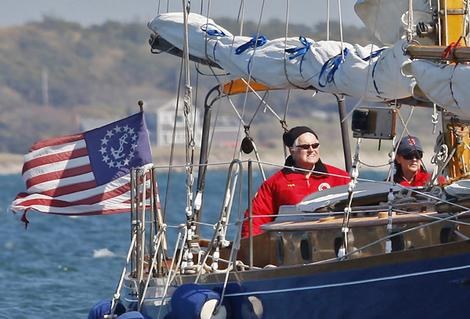 But 2009 was different: Teddy didn’t sail Mya in Figawi this year. The world recognized the seriousness of Kennedy’s health situation this August when he was unable to receive his Medal of Freedom from President Obama in person, or attend sister Eunice Kennedy Shriver’s funeral. But the sailing community knew Teddy was in bad shape in May–because he failed to sail Figawi.

Ted Kennedy will be missed for any number of far more important reasons than his sailing hobby, of course. This is an another open thread for readers to reflect and comment on the passing of the Senate’s liberal lion–and pretty hearty sailor.