There are two ways that one can read the Winston Group poll on the political orientation of those who consider themselves a part of the tea-party movement. One way — the headline that The Hill very reasonably chose — is that about 40 percent of tea-partiers are independents or Democrats. The other — obviously every bit as mathematically valid — is that 60 percent are Republicans. Either way, the results are more interesting than surprising, as they are broadly in line with previous polling on the subject — as well as what I think we can reasonably infer about the movement.

First, the polling. Three relatively recent polls probed tea-partiers as to their political affiliation: the Winston poll that I mentioned (Winston is a Republican polling firm, but I don’t see any obvious reason why its results cannot be trusted in this instance), a Gallup poll which is also out today, and a CBS poll from February. The CBS and Winston polls asked respondents whether they considered themselves to be a part of the tea-party movement; Gallup used a looser definition, asking people whether they supported the tea-party movement instead. Here are the percentage of people in each political camp who said yes: 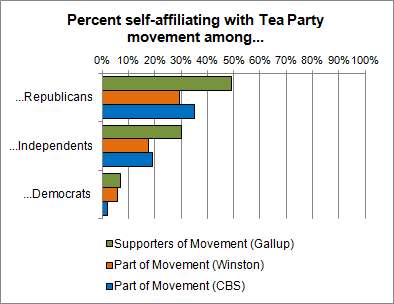 About half of Republicans say that they support the tea-party movement, while 30 percent consider themselves an active part of it. Among independents, those numbers are 30 and 20, respectively. Only a few Democrats consider themselves to be a part of the tea-party: between 2 and 7 percent, depending on the poll, which is lesser than the fraction of self-identified Democrats who typically vote for a Republican candidate in Presidential elections.

Both the Winston and Gallup polls also asked people about their affinity for the tea-party by ideological group: 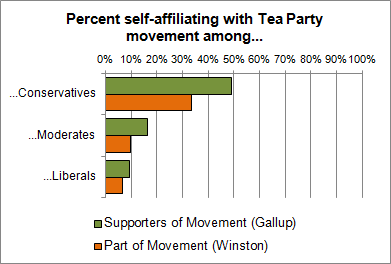 Although the Tea Party gets pretty decent numbers among independents, support is smaller among self-proclaimed moderates; only about 15 percent of moderates support the tea-party (Gallup) and about 10 percent consider themselves a part of it (Wilson). Liberals, who support the tea-party in the high single digits, are actually pretty close to the moderates.

OK, so what did we learn here? I think the tea-party basically has three broad defining characteristics — to the extent we can define it at all:

1. It is conservative.
2. It is anti-establishment.
3. It has a somewhat amorphous and nonspecific goals.

Although we can infer that support for the tea party is not very high among non-conservative independents or among Democrats and liberals, the movement does get some support (especially among liberal independents as opposed to liberal Democrats). Why? Because the tea-party has many different faces. It still shows its libertarian roots at times, but is also fairly populist in character. At other times still — such as when Sarah Palin was speaking to the Tea Party Convention — it can more resemble traditional post-Nixonian conservativism (including on social issues) while in yet other incarnations, it has some good-government goals that might be described as bipartisan or even sort of old-school (i.e. 1890s) progressive. Most of the liberals who say they support the tea-party movement probably aren’t out there carrying signs and attending rallies on a regular basis (neither for that matter are most of the conservatives) — but they may still feel some sympathy for it.

As with discussions on the racial demographics in polling, discussions of the tea-party movement tend to percolate on slow news days as the movement provides something of a Rorschach blot that anyone can use to advance their desired narrative. That does not mean that the tea-party is insignificant. Democrats underestimated it last year: it was one of the first tangible signs of trouble for Obama. Republicans may be underappreciating it now: its participants may not be loyal Republicans — but they were instrumental in resetting the mood of the country into the skeptical and occasionally angry place in which Republicans helpfully find it today.