Wednesday’s NYT/CBS poll on the 18 percent of Americans who identify themselves with the tea-party movement was myth-busting in certain ways. Tea-partiers are wealthier and more educated than most Americans, the poll found. They are largely disinterested in the existence of a third party. And they don’t particularly care about social issues (three-fifths favor some form of legal recognition for same-sex couples).

Another stereotype, however, rings true: tea-partiers are disproportionately attached to, and perhaps influenced by, FOX News. And they are particularly enamored of Glenn Beck. Nationally, just 18 percent of people have a favorable opinion of Beck (the majority have no opinion whatsoever about him). But most tea-partiers do. Do the math, and you’ll find that 59 percent of those who do think highly of Beck consider themselves a part of the tea-party. This is, in fact, the single biggest differentiator of any of the items that the NYT asked about: not ideology, not any particular political belief, but whom they watch on television: 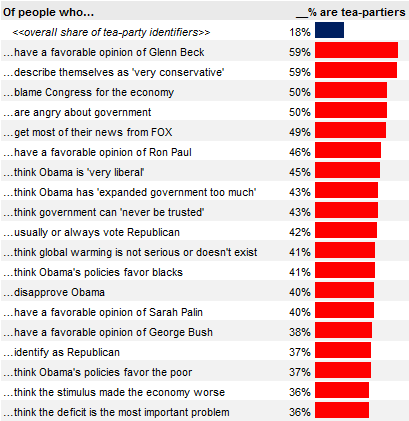 Relatedly, about half of those who get most of their news from FOX consider themselves part of the tea-party. This compares with 37 percent of those who identify as Republican.

This does not necessarily mean that the tea parties have become an offshoot of FOX News — an allegation that liberals throw around a bit too loosely. But FOX, and particularly Beck’s program, have become intimately intertwined with the movement. Indeed, once one begins to think of the tea parties through this paradigm, everything else starts to fit together. The tea-partiers skew older and college-educated: that’s basically the cable news demographic.

Their viewpoints, too, reflect the general tenor of FOX News, whose hosts frequently assert that Obama is socialist or extremely liberal, but are often circumspect in providing evidence for those claims. The tea-partiers, likewise, are deeply distrustful and in fact quite angry at government — but have more trouble at putting their finger on exactly why. They aren’t especially likely to want Roe versus Wade overturned, for instance, or to favor restricted rights for gays, or to be preoccupied with illegal immigration, or to think their taxes are unfair, or to want Medicare and Social Security undone. It’s mostly, rather, in the way that all these events fit into their meta-narrative about American society, a society which they see as leaving them increasingly victimized and disempowered.

This meta-narrative — especially when articulated by Beck — may have conspiratorial undertones. But the tea-partiers aren’t especially likely to believe in outright, specific instances of conspiracy. “Only” 30 percent believe Obama was born in a foreign country, for instance, and only a small minority think violent action against the government is justified. (A possible exception: if one regards disbelief in global warming as concomitant with a belief in a global warming ‘conspiracy’, that is one of the more characteristic beliefs of the movement.)

Academic studies have found that FOX News in fact has quite a bit of ability to persuade voters and reformulate public opinion. That Beck (whose program debuted one day before Barack Obama’s inauguration) has become one of its prominent voices may help to explain why the tea-parties have become so influential, and why public opinion appears to have shifted so dramatically within the past 18 months. FOX may, or may not, have a role in directly promoting the tea-parties. But its opinion programming has become the water-cooler around which the tea-partiers gather.