To follow up on Sean’s post, Sean Reagan at The Back Forty (not our Sean) tracked down a list of 17 states in which the Obama campaign is focusing its Organizing Fellows program. We can contrast these against the 16 states that McCain identified as toss-ups in its strategy briefing, and the 17 states that appear on one of the two versions of our Swing State Analysis: 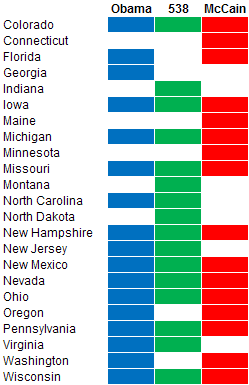 One needs to be careful when pruning through these lists, because they may have as much to do with branding as the realities of what the campaign will ultimately do (particularly McCain’s list, which was couched in what amounted to a donor pitch). Nevertheless, the contrasts are interesting. Obama sees North Carolina, Virginia, New Jersey and Georgia as competitive whereas McCain does not. McCain sees Connecticut, Maine and Minnesota as competitive whereas Obama does not. Both candidates claim to want to focus on Washington and Oregon, even though the 538 list does not see them as competitive. Neither candidate claims to be focusing on Indiana, Montana or North Dakota, although our lists consider those states to competitive.

My critique of Obama’s list would be the inclusion of Georgia rather than Indiana. This may be a reflection of the Obama campaign’s belief that it can improve registration and turnout among traditionally low-turnout groups, like the African-Americans and young voters that are plentiful in Georgia. I think I like Indiana better, however, from the standpoint of portfolio theory. It’s still very difficult to imagine Obama winning Georgia without winning North Carolina, and if he’s won North Carolina, he almost certainly won’t need Georgia. Indiana, on the other hand, offers a relatively unique set of circumstances. Obama is the first Midwestern Democrat to have received his party’s nomination in years (and hails from Chicago, almost literally in Indiana’s back yard). The Democrats devoted attention to Indiana for the first time in years as a result of the state’s important primary. And Indiana is an extremely manufacturing-heavy state at a time of recession. I don’t quite trust the couple of polls that showed Obama ahead in Indiana, but I can more easily see it being a surprise state that actually makes the difference between winning and losing the election.