Continuing a theme I began a week or so ago, I’m going to look more closely at key House races for 2010. To get started, let’s look at all 26 seats featuring Democratic freshmen/women in pickup seats–that is, Dems who beat a Republican incumbent in the general or captured a GOP-held seat by replacing a retired or primary-defeated Republican.

Tomorrow I will look at the first quarter 2009 fundraising totals of these 26 House frosh, but for starters let’s plot them all based on their 2008 vote share and the margin by which Barack Obama carried/lost their district last November. (Data again courtesy of POLIDATA dataset compiled on behalf of the National Journal and the Cook Political Report.) 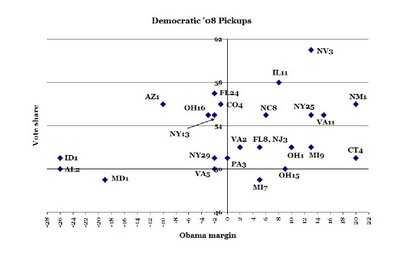 The correlation between vote share and Obama margin is weakly but positively correlated (r = .317), and if we use 54 percent vote share as one cut point and whether Obama or McCain carried the district as the other, the four quadrants sort out as follows:

Group 1. Though circumstances change and all freshmen face some degree of uncertainty, to limit the discussion, let’s set aside the six members in districts in the top right quadrant (NV3, IL11, NM1, NC8, VA11, and NY25) as somewhat safer, though never totally safe of course, than the rest.

Of greater interest are the off-diagonal quadrants in the top left and bottom right.

Group 3. The quintet who won with 55 percent or more despite Obama losing their district–AZ1’s Ann Kirkpatrick, CO4’s Besty Markey, FL24’s Suzanne Kosmas, NY13’s Michael McMahon, and OH16’s John Boccieri–have demonstrated that their support exceeds the external force of possible Obama coattails. At 55 percent or higher their own winning margins were thus at least 10 percent, and in some cases a bit higher because of third-party and write-in votes. I suspect the RNCC will have to make judicious, case-by-case decisions here based on several interrelated factors including the freshmen incumbents’ voting patterns and fundraising totals, the quality of the Republican challengers recruited, and a variety of intangibles like personal gaffes and the effects of local issues.

Group 4. Finally, there is the cluster of 8 Democrats who won narrowly despite a strong Obama tailwind that may or not be available to them in 2010, and these could be the real wildcards–and, not coincidentally, the places Obama needs to visit in the next two years to flex his downballot electoral muscle. Of these eight–which also include CT4’s James Himes, FL8’s Alan Grayson, NJ3’s John Adler, and VA2’s Glenn Nye–those two seats each in Ohio and Michigan could be the bellwethers for the Democrats’ 2008 House frosh class: Steve Dreihaus (OH1), Mary Jo Kilroy (OH15), Mark Schauer (MI7) and Gary Peters (MI9).

Why? To cite just one reason, all four are white Democrats who benefit from having at least 9 percent combined black/Hispanic population shares in their districts. Given that non-white voting turnout between 2004 and 2008 increased 19 percent while white turnout increased just 1 percent, if there is any significant drop-off in minority turnout their path to re-election could be tough. But I’ll have more to say about the “bellwether-ness” of these four districts in a separate, forthcoming post.

UPDATE: I corrected two small typos (had AZ-1 pasted into two groups by accident, and misspelled Mark Schauer’s name–apologies on both counts). But, just for future reference, and since I have never blogged here or anywhere else (DKos, American Prospect, Salon) under a pseudonym and my columns for The Baltimore Sun already include my email address, 538 readers should never hesitate to email me directly at schaller67@gmail.com–so long as comments, corrections and suggestions are polite and not personal. And thanks to those readers for pointing out my typos.