“Dog show people are very obsessive about record keeping, luckily for us.”

Accept, for a moment, that dog shows are like any other sporting event, and you’ll soon notice that they have their own legendary dynasty. That dynasty is the terrier. As FiveThirtyEight’s Oliver Roeder recently wrote, the terrier won 29 of the first 43 Best in Shows awarded at the Westminster Kennel Club Dog Show, the sport’s premier event.

On this week’s episode of our podcast What’s The Point, we visit the Westminster show and chat with Ollie about the terrier’s dominance, how data may change dog shows, and why other breeds are beginning to catch up. Plus, we meet a bunch of cute dogs.

To listen, stream or download the full episode above, or subscribe using your favorite podcast app. Below, a few highlights from Ollie’s piece, which you can read in full on FiveThirtyEight.

The fall of the terrier

The American Kennel Club, which is the governing body for dog shows and whose membership includes Westminster, tallies the most popular breeds in the country each year, going back to 1935. This data is based on purebred dog registrations with the club, which says it registers nearly 1 million dogs each year. (There are something like 80 million dogs owned in the U.S.) [In the mid-20th century,] many of the all-star terrier breeds began to decline.

This fall from prominence has affected more than the multi-champion terrier breeds. The Dandie Dinmont, the Skye, the Kerry Blue, the Bedlington, the Welsh, the standard Manchester, the Australian and the Lakeland have all seen significant declines in popularity, as well.

For some terrier breeds, the situation is existential. In 2011, a campaign was launched to save the Sealyham terrier — winner of four Westminster Best in Shows and once the dog of choice of King George V, Cary Grant and Elizabeth Taylor — from extinction. “If we can save the rhino or tiger, we can surely save this useful and charming breed of dog,” the British magazine Country Life wrote. 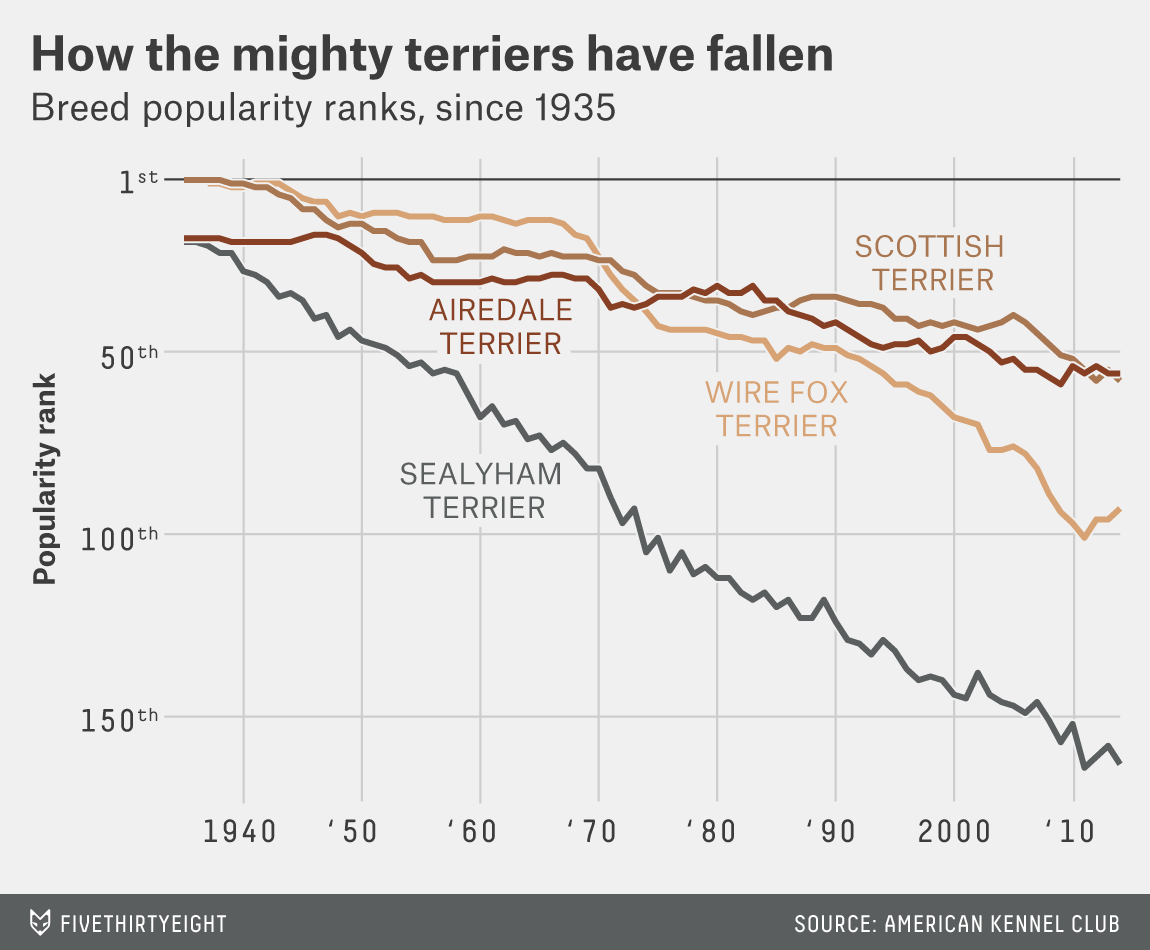 If you’re a fan of What’s The Point, subscribe on Apple Podcasts, and please leave a rating/review — that helps spread the word to other listeners. And be sure to check out our sports show Hot Takedown as well. Have something to say about this episode, or have an idea for a future show? Get in touch by email, on Twitter, or in the comments.

What’s The Point’s music was composed by Hrishikesh Hirway, host of the “Song Exploder” podcast. Download our theme music.