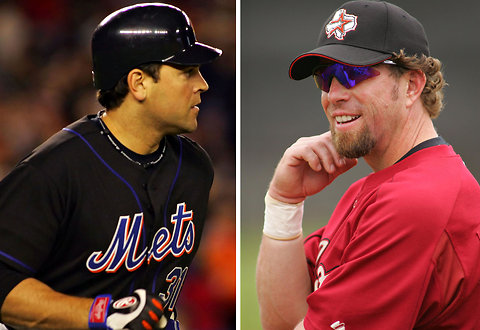 Barry Bonds and Roger Clemens, eligible to be elected to the Baseball Hall of Fame for the first time, will almost certainly not be named when the next choices for Cooperstown are announced on Wednesday. Instead, tallies of sportswriters who have publicly announced their ballots suggest that they may only get 40 to 50 percent of the vote, despite having statistical records that rank them as among the best players in history. A player must be named on 75 percent of the ballots to be elected to the Hall of Fame.

There is little mystery about why Bonds and Clemens will be denied a place in the hall: the reason is the evidence that they used performance-enhancing drugs. But for the first time we will be able to say essentially without doubt that some players have been rejected from Cooperstown specifically because they are known to have used or suspected of having used steroids.

Bonds and Clemens are not the first players implicated in baseball’s steroids era to have become eligible for the Hall of Fame. Mark McGwire, who first appeared on the ballot in 2007, acknowledged in 2010 that he had used steroids. Rafael Palmeiro, suspended in 2005 after testing positive for a banned substance, was on the Hall of Fame ballot in 2011 and 2012 but got less than 13 percent of the vote each year.

For McGwire and Palmeiro, however, there is some uncertainty about whether they would have been elected to the Hall of Fame on the basis of their statistical accomplishments alone. McGwire hit 583 home runs, including a record-setting 70 in 1998, and had a .394 career on-base percentage. But he was also a .263 lifetime hitter who had little value in the field or on the basepaths, who was frequently injured throughout his career, and who ranks just 155th in history according to the statistic Wins Above Replacement, which seeks to evaluate a player’s contributions in all phases of the game. Nor have the baseball writers necessarily rewarded a spectacular one-year performance of the sort that McGwire had in 1998. The man whose single-season home run record McGwire broke that year, Roger Maris, never got more than 43 percent of the vote in 15 years of Hall of Fame eligibility.

Palmeiro hit 569 home runs and had 3,020 hits in his career. But he participated in an era in which gaudy offensive totals were the norm, and he played many of his seasons in strong offensive ballparks. Palmeiro never led his league in home runs, batting average, on-base percentage or runs batted in, never finished higher than fifth place in M.V.P. balloting, and was selected to only four All-Star teams, meaning that he was not routinely among the best players in this league by either subjective or objective measures. He also never appeared in a World Series.

This is not to assert with much confidence that McGwire and Palmeiro would not have been elected to the Hall of Fame on the basis of just their stats. But they are more debatable cases than they might appear on the surface, and even if they had no association with steroids use, they might have challenged the hall’s history of enshrining all players to accumulate 500 home runs or 3,000 hits.

I recognize that I do not need to convince anyone about the strength of Bonds’s and Clemens’s statistical résumés. No player has been elected to the Hall of Fame unanimously: a few writers found dubious excuses to leave players as great as Willie Mays, Hank Aaron, Cal Ripken and Tom Seaver off their ballots. A few writers would undoubtedly have done the same for Bonds and Clemens.

For an overwhelming majority of voters, however, a rejection of Bonds and Clemens is a signal that they see steroid use as completely disqualifying.

Some voters have sought to apply a standard in which players are given full credit for statistics they compiled during seasons in which they were not suspected of steroid use, while discarding or discounting those in which they were. But Bonds and Clemens would probably have qualified for the Hall of Fame even by this rule. News accounts suggest that Bonds began using steroids after the 1998 season. By that time, he had already won three M.V.P. awards and eight Gold Gloves and had hit 411 home runs and stolen 445 bases. On the basis of Wins Above Replacement, he would have ranked as roughly the 30th best player in baseball history had he retired then. The same sort of reasoning does not work for McGwire, whose signature seasons were associated with steroid use, or for Palmeiro, who was found to have used banned substances late in his career and whose Hall of Fame case rests largely upon his longevity.

My ambition is not necessarily to endorse this voting standard, which runs the risk of false precision in the face of substantial uncertainty about which players used performance-enhancing drugs, and when.

One tangible question is this: How did the writers who accepted or rejected Bonds’s application for the Hall of Fame handle the other couple of dozen players on their ballot?

As more writers have begun to disclose their ballots publicly, there is more direct evidence of exactly how they did so. The Twitter user @leokitty has developed a spreadsheet of these ballots, which contained 84 complete entries as of Monday afternoon.

McGwire and Palmeir
o also did relatively poorly, even among those voters who did elect Bonds; each one got only about 30 percent of the vote among these writers. The same was true for Sammy Sosa, whom The New York Times reported tested positive for steroid use in 2003.

But it is hard to say whether this implies that McGwire, Palmeiro and Sosa are regarded as having insufficient statistical credentials for Cooperstown even in the absence of the steroids issue. It could also be, as mentioned previously, that some writers discount a player’s statistics for steroid use but do not reject them completely, and that this discount is sufficient to push McGwire, Palmeiro, Sosa below the threshold for Hall of Fame inclusion whereas Bonds and Clemens were good enough to withstand the penalty.

The most interesting cases in the chart are two players for whom there is no hard evidence of steroid use. Jeff Bagwell was chosen for the Hall of Fame by 82 percent of writers who also picked Bonds, higher than the 75 percent threshold required for election. But he was only named on about half of ballots that excluded Bonds.

The pattern is similar for Mike Piazza, the former Mets catcher who is on the ballot for the first time. While 82 percent of voters who named Bonds also picked Piazza, only 46 percent of those who rejected Bonds did.

In other words, while a significant number of voters who rejected Bonds were willing to vote for Bagwell and Piazza, another contingent seems to be punishing these two players for mere suspicion of steroid use. This group of voters may very well be large enough to deny Bagwell and Piazza entry into the Hall of Fame when they would otherwise have made it in.

Hall of Fame voters are not making such sharp distinctions for other players on the ballot. Bagwell’s teammate with the Houston Astros, Craig Biggio, was named on 76 percent of ballots that also included Bonds, but 70 percent of those that did not, which is not a statistically meaningful difference. Other players, like Tim Raines and Jack Morris, were slightly more likely to be named by voters who rejected Bonds than those who included him. (Hall of Fame voters are allowed to name a maximum of 10 candidates: does this imply that some voters are running out of space on their ballots, and might have more room to vote for players like Raines if they reject suspected steroid users? We will examine that issue in a separate article.)

The comparison between Bagwell and Biggio may be especially instructive. The suspicion that Bagwell used steroids seems to be based on a sort of stereotyping. Bagwell hit for significantly more power than expected based on his minor-league statistics, and grew heavier and bulkier physically. Slugging first basemen who played in the 1990s are automatically suspected of steroid use by a certain contingent of voters, while speedy middle infielders like Biggio are not.

If one were actually to look at the list of players who have been suspended for performance-enhancing drugs, it might call some of these assumptions into question. Among these players are the utility infielder Neifi Perez, who hit 64 home runs in a 12-year career, the slap-hitting outfielder Jorge Piedra, and a substantial number of pitchers. The incidence of performance-enhancing drug use seems to be fairly randomly distributed between stars and benchwarmers, players at different positions and those with different skills.

Some writers seem to think they can profile steroid users, and some otherwise-deserving players seem likely to be denied a place in Cooperstown because of it.