Republicans may not have scored a knockout blow on the policy elements of the debt ceiling debate. But since the remaining proposals consist entirely of spending cuts while still reducing the debt significantly, the judges ought to award them a unanimous decision unless something changes in the last round.

Our focus, however, is on electoral politics, and there we see more of a mixed bag. There aren’t any winners here, but you can argue that Republicans have sustained more damage.

The chart below tracks the change in approval ratings for President Obama and the Congress since the start of the year, with the latter category broken down into approval ratings for Congressional Republicans, Congressional Democrats, and for the Congress as a whole. (The lines in the chart represent smoothed trendlines; individual data points are omitted to reduce clutter.) 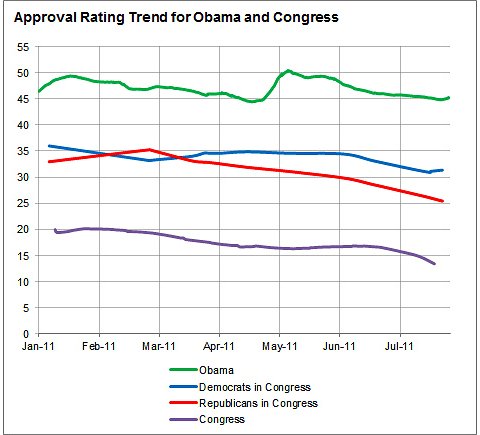 Mr. Obama’s approval ratings have been on a downward trajectory for the past couple of months. They now stand at about 45 percent, down from around 50 percent for most of May after American special forces killed Osama bin Laden.

It’s not clear, however, whether the debt ceiling debate is responsible for this. Mr. Obama has also had to contend with a sluggish economy, which voters are growing yet more pessimistic about. There may also be some reversion to the mean as the news about Bin Laden has faded from people’s memory.

A 45 percent approval rating is tenuous. If that’s the number Mr. Obama carries into next November, he’d be about a 2-to-1 underdog against an average Republican nominee. Nevertheless, Mr. Obama’s approval rating has been at roughly 45 percent for most of the past year, excluding the bounces following the assassination attempt against Gabrielle Giffords and the news about Bin Laden. So this is a problem for Mr. Obama — but not necessarily a new one. The economy remains the more significant threat — and the risk to him from the debt debate is that it could contribute either directly or indirectly to the economic slump, whether by triggering a credit downgrade, undermining consumer and business confidence, or simply by taking money out of the economy, which could sap G.D.P. in future quarters.

Approval ratings for Republicans in Congress, meanwhile, have declined slowly but more steadily — and they had already been fairly low. They’re down to 25 percent from a peak of 35 percent in late February, and from about 30 percent two months ago.

Since Congress’s temperature is not taken as often by pollsters as Mr. Obama’s, the margin of error on these numbers is higher. But there is a lot of supplementary data to support the case that the debt debate has had some impact upon them. Republicans in Congress receive poor marks from voters for their handling of the negotiations, and their positioning has been less in step with that of the typical voter.

But do approval ratings for the Congress matter? They are often fairly low; Republicans won a net of 63 seats in last year’s elections even though their ratings weren’t much better than they are now.

There is some evidence that the overall approval rating for the Congress (which has also declined somewhat) is a good predictor of the degree of anti-incumbent sentiment. Gallup data on Congressional approval, which dates back to 1974, correlates fairly strongly with the turnover in U.S. House seats. Specifically, every additional percentage point decline in Congress’s approval rating has historically caused about 1.5 additional members of Congress to either lose their seats or concede them by retiring. 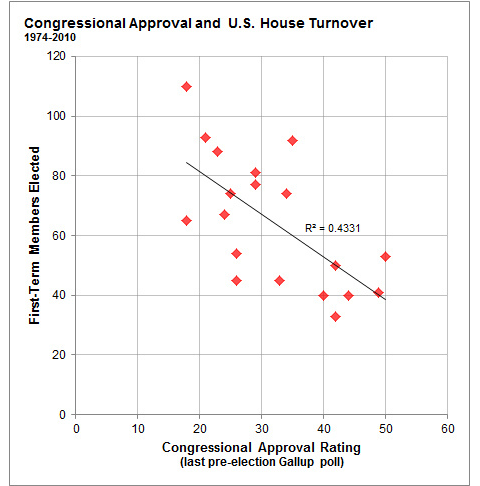 Since Congress’s approval rating is now extremely low, 2012 could be another high-volatility cycle. There are 93 first-term members of the current House (78 of whom are Republicans). Next year could match or exceed that threshold, especially given redistricting, which could be responsible for another 20 or so incumbents either losing or retiring above and beyond the impact of the overall political climate.

What’s less clear is how the losses might be distributed between the parties. An anti-Republican wave is plausible, but so is an anti-incumbent one. The election of 2012 could resemble that of another redistricting year, 1992, in which there were a remarkable 110 first-term members of Congress elected, but in which the losses were split fairly evenly between the parties. (Democrats lost a net of 9 seats in the House despite winning the presidency.)

The most tangible sign that Republicans had gotten themselves into irredeemable trouble would be a shift in the generic Congressional ballot. Those numbers have closed a bit since the start of the year, but it’s not clear that there’s been any impact from the recent events. (Although it’s hard to say because only two polling firms — Rasmussen Reports and Public Policy Polling — have been surveying on the question with any frequency.)

So far, in other words, I think we’re seeing a lot of caution lights for the Republicans — but not yet any red flags. The nearest thing to an exception is probably this: the recent CNN poll that finds that 58 percent of voters think the policies proposed by Republicans in Congress would take the country in the wrong direction. Not only is that figure up significantly from where it was when CNN last polled it in January (when it stood at 50 percent). It’s also by some margin the worst rating that CNN has found for either party since they began polling on the question in 1994.

The good news for Republicans: the ratings for Democrats in Congress are nearly as bad, with 53 percent of voters saying their policies would take the country in the wrong direction. That’s the worst that Democrats have ever rated on the question. But I don’t think Republicans have done themselves any favors in the debate; they have probably weakened their chances of retaining the House some.

The impact on the presidential race is less clear and do not necessarily work to Mr. Obama’s advantage. Presidents do not ordinarily run against the Congress — at least not if they want to win a second term (the clear exception to both rules being Harry Truman in 1948). And Mr. Obama’s opponent is likely to be a governor rather than someone from Washington.

Still, the combination of the assertiveness of the Republican Congress and their lack of popularity is unusual — when Republicans took over the Congress in 1995, and Democrats did in 2007, voters were more much more optimistic about them, at least at the outset. The risk for Republicans is that they exert so much influence on policy that the usual polarity of divided-government elections is reversed, and voters are as concerned about checking their influence as they are Mr. Obama’s.