The Tennessee Titans’ run from the sixth seed to the AFC championship game is a Cinderella tale amid an NFL postseason full of great stories. Even after the Minnesota Vikings upset the New Orleans Saints in the Superdome, and the Houston Texans racked up (and then blew) a 24-0 lead over the Kansas City Chiefs, the Titans beating the New England Patriots and Baltimore Ravens on the road on consecutive weeks still stands out.

This isn’t supposed to be unusual in the league of parity, where the sixth-seed 2005 Pittsburgh Steelers kicked off an era of wild-card teams winning it all. The 2007 New York Giants, a five-seed, met the 18-0 New England Patriots in the Super Bowl and beat them. The 2010 Green Bay Packers won it all as a sixth seed, too. In 2011, the Giants won another Super Bowl ring after sneaking into the playoffs at 9-7 as the champion of a weak NFC East.

It’s no wonder fans and analysts frequently complain about the NFL’s playoff format, insisting that it’s too easy for weak teams to get in and too hard for the regular season’s best teams to capitalize on their seasonlong performance. Amid reports that the league is looking to add a playoff game on each side of the bracket and some in the players union are trying to change the seeding, it seems like a solution to this problem is coming.

The only problem? There’s no problem.

In fact, the NFL playoffs are a chalk factory. Since at least 2010, no other major U.S. professional sport has put its best teams in the semifinals more frequently than the NFL.1 The NFL and NBA averaged three top-two seeds in the conference finals per season, while MLB averaged two, and the NHL averaged 1.3.2 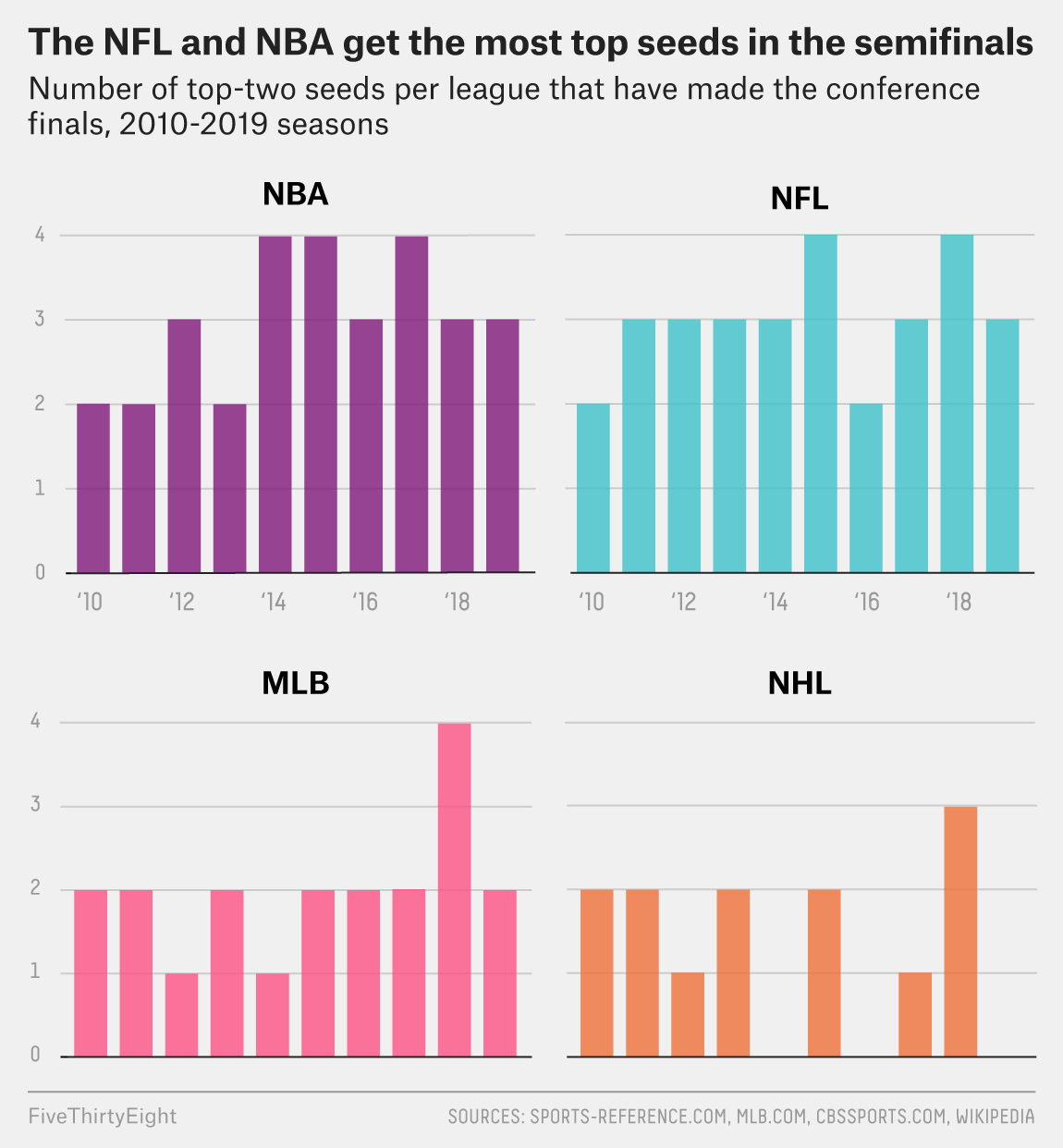 In eight of the past 10 NFL seasons, at least three of each year’s four conference finalists have had a first-round bye. In fact, no season has had fewer than two top-two seeds in the final four. Overall, 30 of the 40 title-game participants have been either No. 1 or No. 2 seeds. Since the 2013 season, every Super Bowl winner has been a top-two seed — and all but one have been their conference’s No. 1.

The NBA is just as good at putting its best teams in position to win a ring; over the same period, it has averaged 3 top-two seeds in its final fours. Of course, every round of the NBA playoffs is a best-of series instead of a single-elimination game — and, as Michael Mauboussin found, NBA basketball results are driven more by skill than any other major U.S. sport. Luck plays a much bigger role in baseball and hockey, so it’s no wonder that MLB and the NHL don’t put top seeds in the semifinals nearly as often.

But wait — we know NFL results are significantly luck-driven, too, and single-elimination games give underdogs a better chance to win than a multiple-trial series. How does the NFL put its regular-season champs in position to win conference and league titles as frequently as the NBA?

Credit the NFL playoff structure. When the season’s winningest teams have to win just one home game to make the conference finals, they’re going to do so more often than not. Of course, when luck is a significant factor in wins and losses, the winningest teams aren’t necessarily the best ones. FiveThirtyEight’s Elo rankings still regard the Ravens and Saints as the strongest and third-strongest teams. The Ravens, Saints and Patriots also finished first, third and fourth in Football Outsiders’ DVOA.

But the reason we have playoffs is to put the winners against the winners and see who wins — and the NFL’s format does that more effectively than anyone gives it credit for.