If President Obama’s health care bill is stricken by the Supreme Court, liberals will take it as evidence of judicial overreach, or at least that the court has shifted far to the right. One statistical method for analyzing the Supreme Court, in fact, already finds that the current court is the most conservative since at least the 1930s.

The method, called the Martin-Quinn Scores for the two scholars that developed it, Andrew D. Martin of the Washington University School of Law and Kevin M. Quinn of the Berkeley School of Law, estimates the court’s ideology by evaluating the combinations in which different justices vote with one another and how this changes over time. Their technique is similar to the well-regarded DW-Nominate method that is used to estimate the ideology of members of Congress based on their voting records.

In the chart below, I’ve reproduced the Martin-Quinn scores for the period since 1937, when their data set begins. For each year, I’ve sorted the nine justices on the court from the most liberal to the most conservative in that year. To keep the number of justices constant at nine, I extended the term of the most recently retired or deceased justice in the case of a prolonged vacancy.

The thick black line in the center of the chart, however, is the important one. This line represents the median justice, currently Justice Anthony M. Kennedy, whose vote would ordinarily be decisive in a 5-to-4 decision. 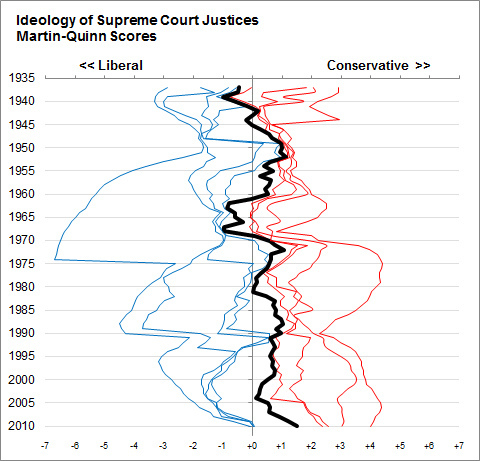 As you can see from the chart, Mr. Martin and Mr. Quinn rate the current court (based on data up through late 2010) as the most conservative in their database based on the positioning of the median justice, the previous high having come in the early 1950s. Although Justice Kennedy is not extraordinarily conservative relative to all other justices who have served on the court, he is very conservative by the standards of the median justice, who has typically been more of a true moderate. 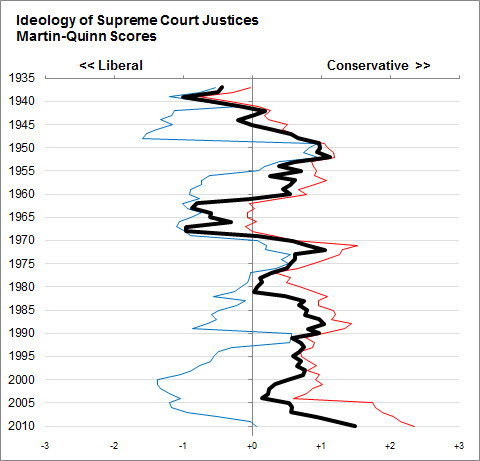 The Martin-Quinn method suggests that there has been some overall rightward drift among almost all members of the court, including the more liberal justices, since Chief Justice Roberts took over for Chief Justice William H. Rehnquist.

Although Chief Justice Roberts is not especially more conservative than Chief Justice Rehnquist under their system, chief justices can sometimes exert an overall pull on the court based on the way they manage it, and this may be one of those cases.

The replacement of Justice Sandra Day O’Connor with Justice Samuel L. Alito, of course, has also had some influence, as Justice Alito rates as substantially more conservative than she did.

Like other statistical approaches toward estimating ideology, the Martin-Quinn method should be approached with some caution. Most notably, it does not consider the subject matter of what the justices are voting upon, when in reality the Supreme Court has a lot of discretion about the types of cases it undertakes. A substantial change in the types of cases the court is deciding upon could potentially affect the accuracy of their ratings.