There has been enough movement in the polls in the past 24 hours to warrant revisiting our delegate projections from Sunday. I now have Rick Santorum trailing Mitt Romney by about 150 delegates, and also falling behind Newt Gingrich, who has some favorable momentum in the delegate-rich Southern states.

Based on the most recent polls, I’m making the following set of changes: 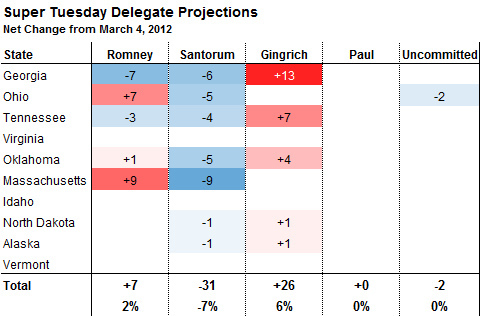 In Georgia, where there has been a lot of recent polling, I’m simply applying the projections from our model for the statewide polling, and then doing some educated guessing about how this will play out in the state’s Congressional districts. Critically, Mr. Santorum has now fallen below 20 percent in the statewide projection, which means he would not be eligible to receive any of the 31 delegates that are allocated statewide. Mr. Gingrich is now polling in the mid-40s, which means he should win an outright majority in some Congressional districts, allowing him to take three rather than two delegates there. There’s an outside chance that Mr. Gingrich could hold all of his opponents below 20 percent of the vote, in which case he would claim all 31 statewide delegates, but I’m certainly not assuming that for now. Instead, the revised projection is 56 delegates for Mr. Gingrich (up 13 from yesterday), 17 for Mr. Romney and 3 for Mr. Santorum.

The polling is also very current in Ohio. There are fewer important voting thresholds here — although Mr. Gingrich would be eligible for some statewide delegates if he hits 20 percent of the vote there, something which is possible but still looks unlikely. Instead, based on Mr. Santorum’s having fallen slightly behind Mr. Romney in our projections, I’m taking some delegates from Mr. Santorum’s pile (along with uncommitted delegates that would have gone to Mr. Santorum had he filed a full delegate slate) and giving them to Mr. Romney. The new projection is Mr. Romney 35 delegates, Mr. Santorum 21 and uncommitted 10.

There haven’t been any new polls in Oklahoma, but I’m assuming that the patterns we saw over the weekend in Georgia and Tennessee are likely to manifest themselves there as well, with Mr. Santorum declining at the expense of Mr. Romney and especially Mr. Gingrich. Mr. Santorum should still win the state, but Oklahoma’s delegate allocation rules are such that they go from being potentially winner-take-all to quite proportionate in a hurry. I’m taking seven of Mr. Santorum’s delegates and giving four to Mr. Gingrich and the other three to Mr. Romney.

Massachusetts is another state that hasn’t been polled in some time. But I’m now doubtful that Mr. Santorum will get 15 percent of the vote there, the threshold required for him to receive some proportional delegates. Polls conducted when Mr. Santorum was in a stronger position nationally projected him to get 20 percent of the vote in Massachusetts. But his standing has fallen by more than five points since then in most state and national surveys, and Massachusetts does not play to his strengths, especially given that Mr. Romney makes his home there. In fact, I’m now guessing that none of Mr. Romney’s opponents will achieve 15 percent of the vote, which would allow him to win all 38 delegates — although Mr. Santorum and Ron Paul still have a fighting chance at this.

Finally, I’m taking one delegate away from Mr. Santorum in North Dakota and in Alaska and giving them to Mr. Gingrich. This does not break the tie between Mr. Romney and Mr. Paul in Alaska, but does imply that Mr. Santorum is unlikely to win there. It also suggests that Mr. Romney is perhaps the slightest of favorites in North Dakota, although that state could still go to any of the three leading candidates.

This yields an overall projection of 224 delegates for Mr. Romney, which would be a majority. It’s now Mr. Gingrich in second place, with 87 delegates to Mr. Santorum’s 76. 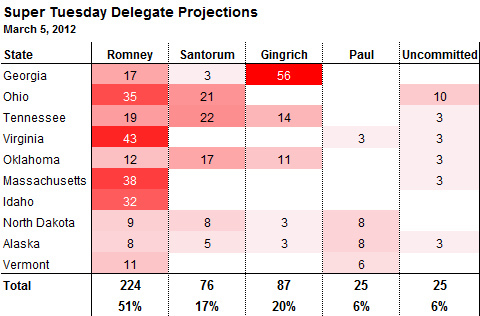