Depending on where you’re betting, you can get the New Orleans Saints as anywhere from 4 to 6 points underdogs, although the average seems to have settled upon 4.5. 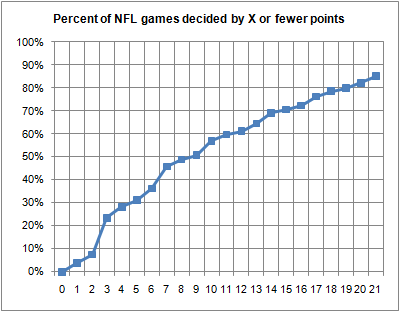 Sure, caveats apply: 4.5 points isn’t as many in a game between two high-scoring teams as it would be between defensively-oriented ones (and Super Bowls in particular tend to be high scoring.) Still, with anything greater than a 3 point spread, Vegas is rendering a pretty concrete judgement as to which it thinks is the better team: in this case, the Indianapolis Colts. But is this justified on the basis of the evidence?

From my point of view, I don’t really see it. The Colts may be the better team and are probably the favorites today, but I don’t see them as being definitively and demonstrably better. Throwing out the weeks when the teams weren’t trying but counting the playoffs, the Saints have scored an average of 34 points per game and allowed 21; the Colts have scored an average of 28 and allowed 17 — no clear edge there. The Colts played a somewhat better schedule, but systems which account for that — see the ‘PREDICTOR’ version of the Sagarin ratings, for instance — consider the teams to be about equal.

So do more sophisticated systems. Football Outsiders, who know their stuff as well as anyone, consider the game to be a toss-up. Accuscore thinks that the Colts will win about 55 percent of the time but that they should be just 2 or 3 point favorites, not 4.5 or 5. Meanwhile, computer models developed by the Wall Street Journal and Indiana University give the Saints a (very, very slight) edge.

A lot of the Vegas sentiment, undoubtedly, is because the Colts turned in a considerably more impressive performance against the New York Jets during Championship Week than the Saints did against the Vikings — a game they were lucky to win. In general, however, it’s a trusism that people overemphasize the most recent events when making predictions — the Championship Game won’t necessarily have a lot more predictive value than, say, Week 12. And the Colts’ performance also came against the New York Jets, one of the weaker teams to have made the AFC Championship in some time. Had the Saints played the Jets, their performance might have been just as impressive. In fact, they beat the Jets 24-10 — about the same margin as Indy’s 30-17 win — at home in Week 4.

The Saints and Colts actually have had five opponents in common this season, not counting the Colts’ Week 16 and 17 games against the Jets and the Bills, respectively, when they weren’t playing their regulars. The Saints won by the larger margin against 4 of the 5 teams — and the tally would be 5 of 6 if we counted the Buffalo game — although Indy makes up a lot of ground because they clobbered the lowly St. Louis Rams whereas the Saints had one of the worst games of their year against them:

And yes: I do watch a lot of football. At no point during the season did I think: Wow, Indy is clearly the best team in football (the closest I came to that feeling for any team this year was for the Saints, after they crushed the Patriots 38-17 in Week 12). I thought the Colts were a very, very good team, but were probably a bit fortunate to have gone 14-0.

Again, you can certainly argue that Indianapolis is the better team. Peyton Manning is an incredibly impressive football player, their defense is pretty clearly better, and they’ve been a bit more consistent from week to week. Were this a pick ’em, I’d probably go with the Colts. But if you’re getting the Saints and 4.5 or even 5.5 points, you should take them.