Frank Rich is on to something with his notion of Barack Obama as “Acting President”. But there is something even more powerful at work here. Namely, when Obama does the things that a President might do — going abroad and meeting with foreign leaders and military commanders, or delivering a speech to an international audience — it no longer becomes difficult to contemplate the idea of him as President. We might not know exactly what would happen if Obama were elected. But we have some idea what an Obama Presidency would look and feel like. We might not agree with everything that Obama has to say. But we can imagine him standing in front of the country — as President — and saying it. The fear of Obama’s ‘otherness’ is reduced. One may be skeptical of an Obama presidency, but he probably isn’t scared of it.

Indeed, the longer that the Presidential campaign drags on — and it has dragged on for a very long time now — the less resonance there is to the critique of Obama as being too inexperienced to occupy the White House. There is a core truth to this criticism that remains as valid as it ever has — Obama has spent relatively few years in elected office. But ‘inexperience’ has also been employed by Obama’s opponents as a less literal, politically correct stand-in for other sorts of arguments: Obama is young, black, has a foreign-sounding name — he’s unfamiliar. Obama may still be inexperienced, but familiarity is no longer a problem.

This phenomenon has actually been noticable for some time. I performed a search of the archives for four major newspapers: the New York Times, Los Angeles Times, Washington Post, and USA Today. In January, Obama’s name was mentioned a combined 1,065 times between those four sources. In 271 of those 1,065 articles (25.4%), the word “experience” or “inexperienced” appeared in conjunction with Obama’s name. This month, by contrast, Obama’s name has appeared 1,431 times. But the terms “experience” and “inexperienced” have been associated with his name only about half as often — in 180 of 1,431 instances, or 12.6 percent. 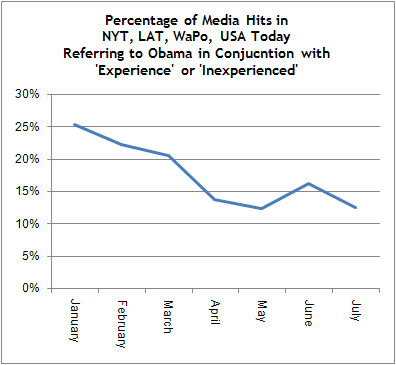 Part of this certainly is that John McCain has not been nearly so aggressive about pushing the experience argument as Hillary Clinton was. Whether this is to his campaign’s credit or not, I don’t know. On the one hand, the experience theme largely fell flat for Clinton, with the possible exception of the ‘3 AM’ ad that aired around the time of the Texas and Ohio primaries. On the other hand, McCain is on much firmer ground to actually argue that he has an advantage in experience. But if McCain was going to win the election on the experience argument, he probably ought to have begun emphasizing it before Obama’s trip abroad.