Post-debate polls so far have Conservative Leader David Cameron winning tonight’s event — some by narrow margins (one shows a tie) and some by comparatively large ones — with the Liberal Democrats’ Nick Clegg finishing in second and Gordon Brown a clear third.

Save for a few moments where he came across a bit disrespectfully (especially toward Brown), Cameron was solid from start to finish. He did a good job, and increased the Tories’ chance of taking a majority. But it seems to me that there’s also a fairly active dynamic between the LibDems and Labour for left-of-center swing voters, especially from the working classes. Does Cameron have a rooting interest in this? According to our model, he does.

Let’s take the baseline forecast we published earlier today and give the Tories an extra point-and-a-half to get them up to 36. We’ll accomplish this by giving the Conservatives some from the poll of nonvoters, so it won’t impact any of the Labour-Liberal dynamics. As you can see, if our model is right (and bear in mind that it’s very aggressive as compared with uniform swing), that would put the Conservatives right on the brink of a majority at 322 seats: 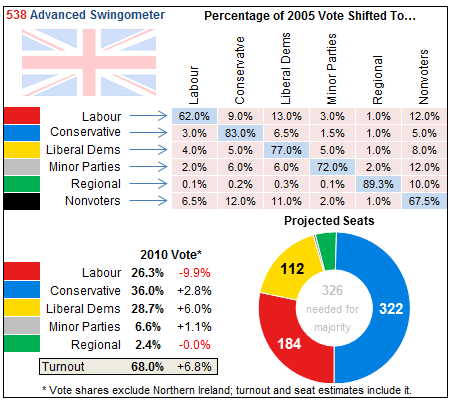 But now let’s say that LibDems also gain some votes from Labour. We’ll leave the Conservatives’ number unchanged at 36, but the LibDems finish in second place at about 31 percent of the vote, and Labour all the way down at 24. Conservatives in fact pick up a few extra seats here, mostly in constituencies where LibDems do enough damage to Labour to knock them out of first place but not enough to win the constituencies themselves, letting Conservatives pick up the spoils. Indeed, the model now gives the Conservatives a majority of 334. 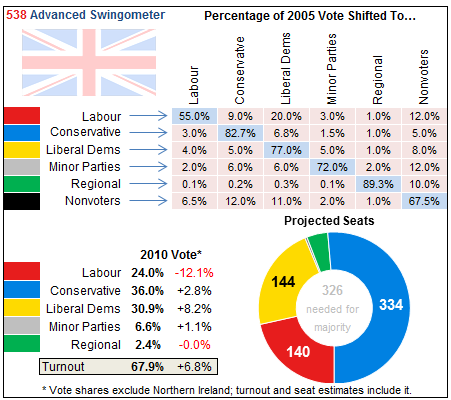 On the other hand, if Labour were to pick up some votes back from the Liberal Democrats — and this is the less likely of the two sub-scenarios given the way tonight’s debate was scored — Conservatives drop down to 314 seats. Still a good finish, but a dozen short of a majority: 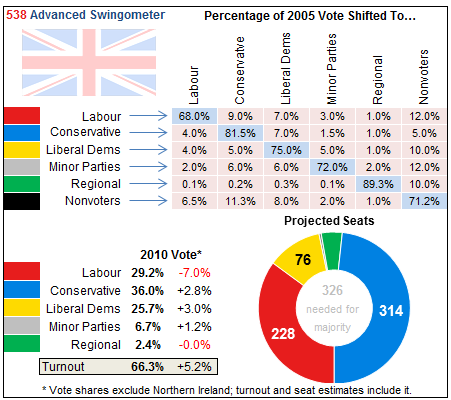 This is a somewhat tricky dynamic for the LibDems. Obviously they want as much of the vote as possible. But their realistic upside is probably a hung parliament in which Labour does embarrassingly poorly and they become the de facto second party. If the model is right, however (yes, I’m going to keep caveatting that), and if Cameron gets another point or two out of the debate, it may be hard for them to overtake Labour in the seat count whilst simultaneously denying Conservatives a majority.

EDIT: One slight wrinkle: one of the pollsters, Angus Reid, who had Cameron winning the debate, also had Clegg doing best amongst undecideds. Although Angus Reid has a mixed reputation, it’s hardly a stretch to imagine that something like this could have played out. The sense I get (and it’s hard to know for sure because the UK pollsters ‘push’ their undecideds into different camps rather than leaving them be) is that the few undecideds that remain are somewhat left-of-center and are somewhat working-class — the group that Clegg was speaking toward tonight as he toned down the wonkery for a little bit of feel-good fluff. If that’s the case, Cameron isn’t necessarily guaranteed a bump, in spite of having won the debate on points and in the polls.

EDIT #2: Another pollster, ComRes, also polled people on their post-debate voting intentions and found Conservatives and LibDems tied at 36 and Labour down at 24. I don’t know how much faith I’d put in these instant polls — the pollsters are willing to do things the U.K. that we probably wouldn’t put up with here. But, even though I thought he improved as the night wore on, I don’t know that Brown did enough to stave off the chance (not necessarily the likelihood) of a complete collapse by Labour.

Interestingly, there does appear to come a point at which the above logic is contradicted: if the LibDems take too many votes from Labour, they start simply winning all those seats themselves, rather than allowing Conservatives to sneak in from behind. In the probably ridiculous case, for instance, where it was something like Conservatives 36, LibDems 35, Labour 22, we show Conservatives reverting back to being a few points shy of a majority: 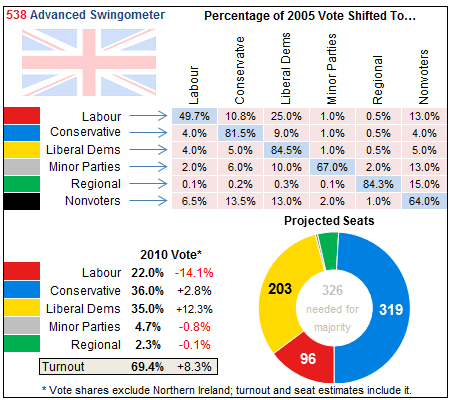 Can’t guarantee you that the model isn’t off its rocker, but it’s sure a lot of fun to play around with.