I’d written earlier today about some of the misleading conceptions surrounding the “Ground Zero Mosque” — which is not really at Ground Zero and is not really a mosque as most people would think of one. By sheer coincidence, I happened to be near Ground Zero for dinner tonight and did a little bit of walking around afterward. There was construction work being done on the site even at 11 PM on a muggy Saturday evening, and it definitely still gives one the chills. Here is a not-very-good photo I took from the corner of Cortland and Church on the east-southeast perimeter of the World Trade Center site, facing due north toward where Cordoba House would be. 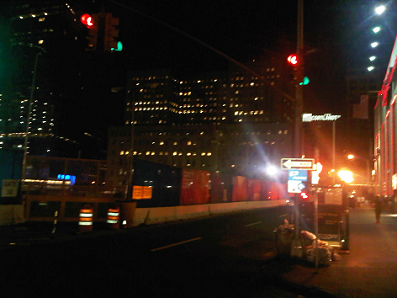 There’s pretty much no way that you’re going to be able to see a 12-story building located two blocks behind a 16-story building that occupies the entire block, with another ~14-story building wedged in between. I also walked the entire northern permiter of the WTC site — there’s nowhere that you’d get even a passing glimpse of the mosque. And I walked the stretch of Park Place where Cordoba House would be located — it’s a fairly incoherent and downtrodden block that you’d have no particular reason to visit, unless you were going there specifically to see Cordoba House, nor is it one that you’d happen upon unintentionally. Could you see Cordoba House from a high floor on the north face of the Freedom Tower once it’s built? I think that you could catch a glimpse of it — along with most of the rest of Lower Manhattan — if you strained yourself, although I’m not even certain about this. It certainly would not be very prominent and would look pretty much like an ordinary office building.

I know that people may think I’m being overly semantic and literal-minded, but it seems to me that these details matter. There’s not going to be some huge, ostentatious mosque with some minaret or some giant crescent located “at” Ground Zero, nor within clear sight of it, nor even on the way (in terms of virtually all natural paths a commuter or tourist might take) to Ground Zero. Rather, there’s going to be a mixed-use retail building that contains some kind of reformist mosque, located somewhere in its general vicinity — as there already is now. It would not impose upon or offend anyone unless they were going out of their way to be imposed upon or offended.

Personally, after having bypassed the media filter and actually done some basic research on the topic, I’ve gone from probably being a 2 or 3 on the five-point scale I highlighted in the previous post — meaning that I wasn’t thrilled about the mosque, but thought they had a First Amendment right to build it — to actually being closer to a 1. I think it would be a good thing for my city if this structure were built, and as someone who knows next to nothing about Islam, I’d be curious to see how an explicitly peace-loving, reformist, and Westernized version of the religion and culture chose to present itself to New Yorkers. About the only side effect might be a good falafel stand or two.

If you disagree with me, I can totally respect that. But please get off your butt and actually scout out the area around Ground Zero first, or failing that download Google Earth and apply some common sense about urban geography.