The public relations firm Strategic Vision, LLC, which we have raised pointed questions about for the past several days, lists on its website a mailing address of 2451 Cumberland Parkway, Suite 3607 in Atlanta, Georgia and describes itself as being “headquartered in Atlanta”. However, the firm’s physical offices appear to be located some two hours away in rural Union County, Georgia, in a motel park in Blairsville, far outside the Atlanta Metro Area.

The website for the Union County GOP, for which Strategic Vision co-founder Laura Ward Johnson is listed as a webmaster, recently advertised a BBQ, for which tickets could be purchased at the Strategic Vision offices. The address listed in association with the offices is:

This appears to match the listing for the Seasons Inn Motel & Plaza, which is located at 16 Town Square in Blairsville. Laura Ward Johnson had also formerly listed the 22 Town Square address in a posting at the Union County Republican Party facebook page, although the reference has since been edited. Last year, Laura Ward Johnson and David Johnson, the husband-and-wife team that founded Strategic Vision, gave an interview to the Philadelphia Inquirer in which they indicated that they had moved to Blairsville from Marietta in suburban Atlanta.

The firm’s Blairsville offices are located some 1 hour and 48 minutes away from the mailing address the firm lists in Atlanta, which in fact appears to be location of a UPS Store. Blairsville is a small city (pop. 659) near the North Carolina border and the Chattahoochee National Forest, and outside of the Atlanta-Sandy Springs-Marietta metropolitan area as defined by the Census Bureau. It is approximately as far from Atlanta as Milwaukee is from Chicago, or Philadelphia is from New York City. 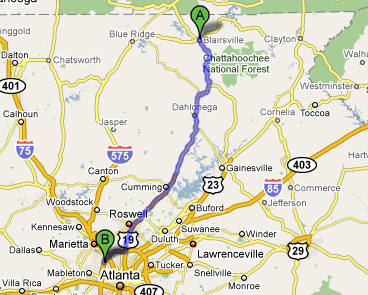 A photo of the Strategic Vision office, as posted at the firm’s facebook page, is reproduced below. The address listed in the photo indeed appears to be “22 Town Square”, although the image is not of a high enough resolution to say so definitively. 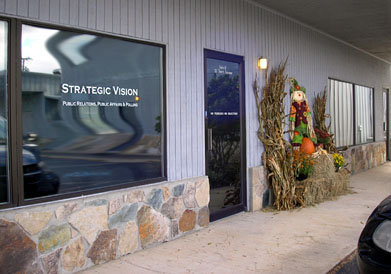 In an interview to the Washington, DC daily The Hill, David Johnson claimed that he and his employees had been harassed and threatened by readers of this website. Although I frankly find these allegations somewhat dubious, I would nevertheless urge everyone to strictly and completely avoid any unsolicited physical contact or any verbal threats of any nature with Strategic Vision and its employees, and would further urge the Blairsville police department to keep a close watch on Strategic Vision’s offices and make sure that everyone’s security and peace of mind is protected.

Thank you to the readers of this website and Pollster.com, which have assisted with the development of this story.