Parents want the best for their kids. This, no doubt, extends to the board game closet. But Mom and Dad may not be aware of the drudgery and fickle chance to which they’re subjecting the family. In a recent piece, I found that some of the most beloved childhood games — think Candy Land, Snakes and Ladders, Monopoly — just aren’t very good. The data emphatically says so. But where there’s data, there’s also hope.

But first, let’s pause for a useful qualitative take. The agony of playing Monopoly with children is well described by comedian Louis C.K. (fret not, this is safe for work).

Clearly, Monopoly can teach kids some bracing lessons about the risk of personal financial ruin. But we can do much better.

What makes a good game? Good games keep players, however young, engaged — and you’re not engaged in Monopoly if you’re bankrupt. Good games also require meaningful action and decision-making — something lacking from Candy Land or Snakes and Ladders — rather than merely blind luck. Games are fun, games engage and games teach. So, which ones do it best?

As before, I’ll rely on data from the popular gaming site BoardGameGeek.1 The site hosts a huge database of nearly 75,000 games. Users log on and rate them on a scale from 1 (unplayable) to 10 (always itching to play). It’s a sort of TripAdvisor for board games. In addition to the user ratings, the data set also includes an entry for the recommended minimum age. Combining those, we can set our children down a fruitful board gaming path.

In this data, one observation quickly becomes clear: According to the users of BoardGameGeek, games get better as children get older. Games for a 3-year-old average a rating of just above 5, whereas games for a 10-year-old average a rating above 6, for example. This isn’t surprising — games get more intricate, strategies more complex, play more engrossing. But there are quality games to be played at any age. To consider games that are fairly tried and true, I’ll restrict this analysis to those with at least 100 user ratings. This leaves us with 2,849 games recommended for children ages 3 to 10.

Here are the site’s average ratings vs. minimum suggested age of games that could get a child a pretty long way — from preschool to fifth grade. 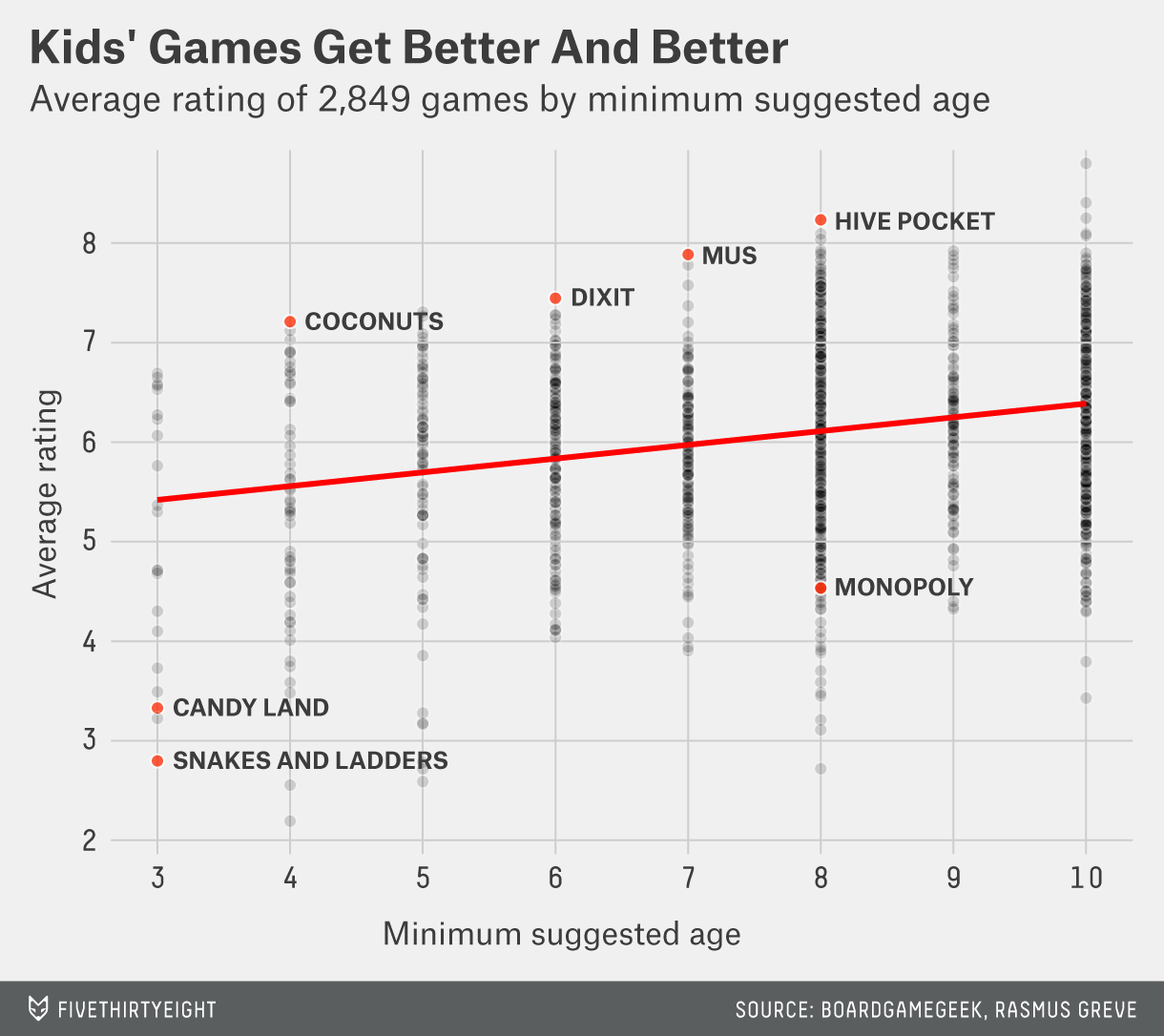 The highest-rated games for each age are diverse. Coconuts, for example, is a dexterity game — players fling tiny toy coconuts into cups. Dixit is a creative storytelling game — a sort of artsy Apples to Apples. Mus is a Basque card game. Hive Pocket — a version of the game Hive — is an abstract, tile-placing strategy game. But they all have features of a good game — they engage players, and they require action. There’s something more to these games than just rolling the dice.

Variety is the spice of board-gaming life, so here, by age, are three highest-rated games — gold, silver and bronze for each year of a child’s life.2 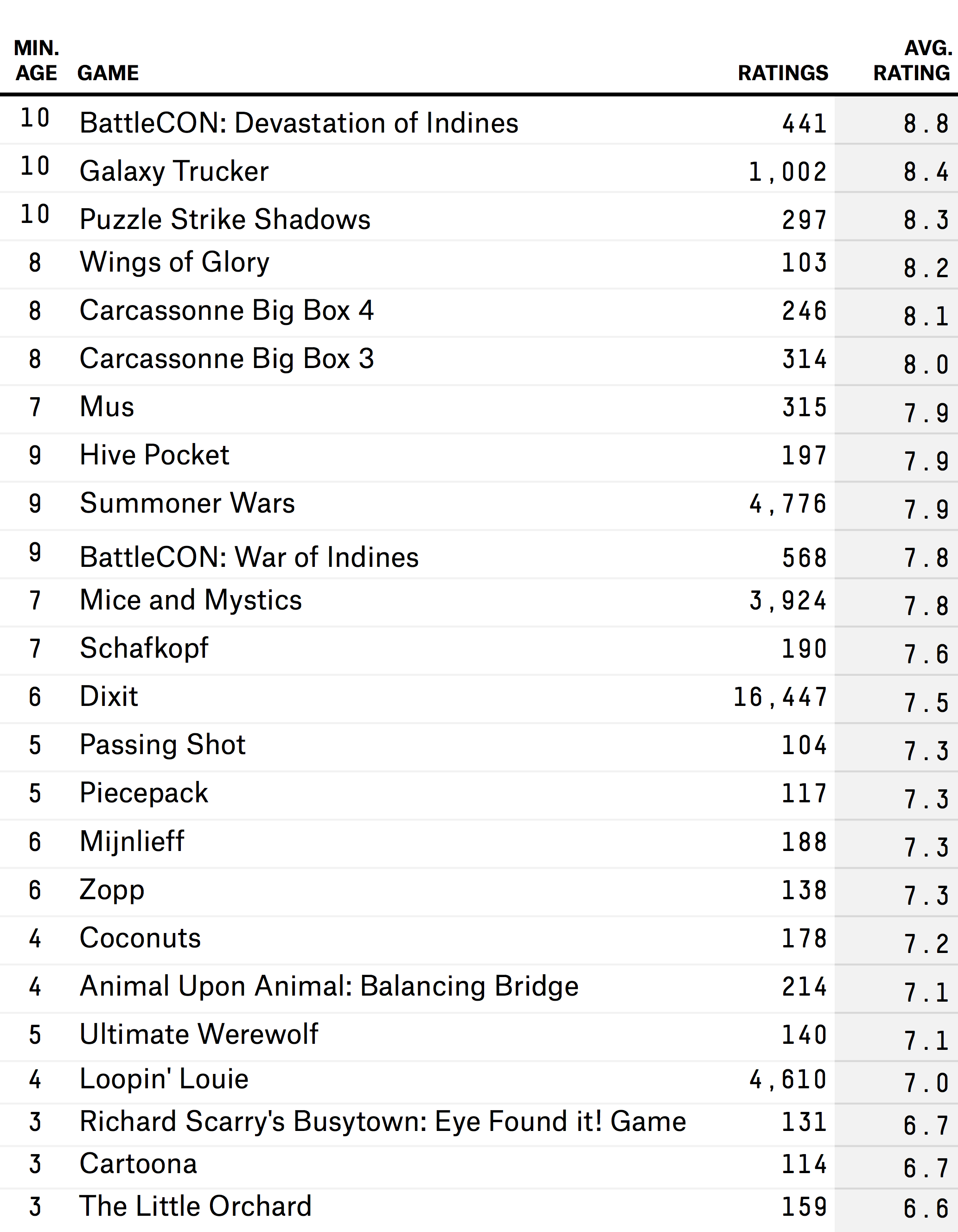 Again, it’s a remarkably motley group of games. Mijnlieff (pronounced “mine-leaf”) is a sort of advanced tic-tac-toe, first published in 2010. Schafkopf is a traditional German card game dating to the late-18th century. Zopp is soccer, in board game form. And Loopin’ Louie involves a battery-powered airplane.

A few of these games stand out with a bunch of user ratings — Loopin’ Louie, Dixit, Mice and Mystics, and Summoner Wars are the most vouched for on the list. Dixit is the 2010 winner of the prestigious Spiel des Jahres prize — game of the year. As such, it’s in the elite company of quality gaming flagships like Ticket to Ride, Carcassonne and The Settlers of Catan. Mice and Mystics — though I’ve never played — sounds like a scream. From the publisher, “In Mice & Mystics players take on the roles of those still loyal to the king — but to escape the clutches of Vanestra, they have been turned into mice! Play as cunning field mice who must race through a castle.” What could beat that? And Summoner Wars — from the same publisher, Plaid Hat Games — is a tactical card game. “Call your forces forth and send them in a surging wave against your enemy. Cast spells that bolster your forces and cut down those who would oppose you.” Every kid’s dream!

BoardGameGeek caters to adult games, of course. Not many 3-year-olds, if any, are rating games online. But many of the elements that make a quality adult game make a quality children’s game, too — strategic thinking, engagement, an engrossing theme and so on. And the users of BoardGameGeek tend to be attuned to these positive qualities. Plus, they surely want their children to continue in their discerning gaming footsteps. The judgment of adults is a proxy here for that of children.

Most of the games listed here are probably not familiar to many casual gamers, or many budding gamers’ parents. But maybe that’s the point. We seem stuck with some pretty bad games. For whatever reason, these board game chestnuts fly off the shelves apace. As of this writing, the first page of Amazon’s top sellers includes Monopoly, Hungry Hungry Hippos, Candy Land Disney Princess Edition, Clue and Sorry. But there’s a wide world beyond these stalwarts. We’re in the midst of a golden age of board games! Trust the data — better games await. Your kids will thank you.