Stephen Colbert on Thursday was named the new host of “Late Show” on CBS. He will take over when David Letterman ends his 33-year run on late-night television next year.

My colleague Walter Hickey wrote about the political and demographic leanings of Colbert’s audience. It’s just about as young and liberal as you might think.

But what about Colbert’s overall popularity? How does it compare to Letterman and other late-night comedic TV hosts?

We invented a quick-and-dirty metric to measure a comedian’s popularity on the Internet. It’s called the Arsenio.

An Arsenio is defined as the number of searches for a TV host relative to Hall on Google Trends. A few notes: These figures are based on all Google searches worldwide since 2004. The results are based on search topics rather than exact text strings. For example, Google can usually figure out that a search for “John Stewart” is, in fact, a search for the late-night comedian Jon Stewart. (We recently used a similar process to rank the popularity of North American sports franchises.) An Arsenio cannot be divided, so results are rounded to the nearest whole number.

Colbert ranked first among the 15 hosts whom we searched for, at 16 Arsenios. In second place is the man he’ll be replacing, Letterman, at 14 Arsenios. 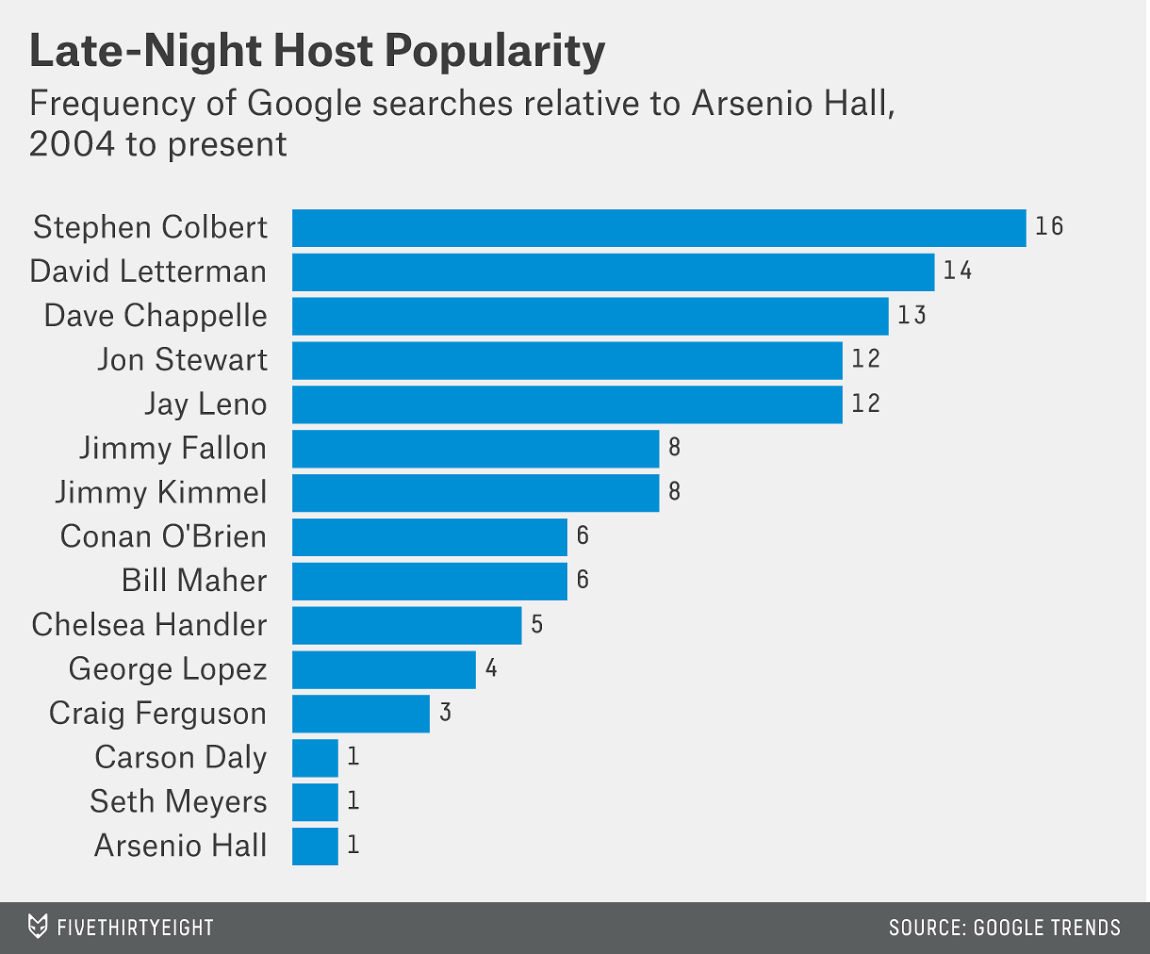 The third-place entry, just behind Letterman at 13 Arsenios, was a mild surprise: Dave Chappelle, whose show last aired on Comedy Central in 2006. Stewart and Jay Leno closely followed, at 12 Arsenios apiece.

In fairness to Hall, his Google search popularity has significantly increased since his show returned; since September, Colbert’s name has been searched for only about four times as often. But Colbert’s popularity could increase after Thursday’s announcement.

A very technical aside: Our measurement of Arsenios is derived from downloading week-by-week numbers from Google Trends and averaging them, which produces slightly more precise figures than looking at the aggregate numbers. However, there are a number of weeks when Hall’s search popularity was listed as zero by Google Trends. In fact, it was not exactly zero; some people were searching for him. Google Trends lists its numbers on a relative basis, where 100 is the peak week for the most popular search term. When another term is listed at zero, its search volume was very small by comparison, but it may have been anywhere between zero and 0.5, and rounded down to zero. In these weeks, we assume that the host’s search popularity was 0.25 (the midpoint of zero and 0.5) rather than zero exactly.