In December, I posted ratings for each Democratic Representative based on how they voted on 10 key agenda items in 2009. The idea was to see how each Democrat voted relative to the partisan slant of his district; a Democrat voting for the cap-and-trade bill in a Republican-leaning district would get quite a bit of credit for that, for instance, while one voting for the same measure in a district with a PVI of D+15 would get almost no credit for the vote since almost every Representative from such a district voted for the bill anyway. The analysis concluded that TN-6’s Bart Gordon, who voted with the Democrats on 8 of 10 key agenda items in spite of coming from a R+13 district, had provided the most value to his party on key votes. (Unfortunately for Democrats, Gordon is retiring.) Artur Davis of AL-7, who has voted against several major agenda items because he is running for governor in Alabama, was the least valuable Democrat.

The original version of the ratings built in an exception for what I termed “liberal nos”: votes that a Democratic member cast against his party’s agenda, but which he justified by stating that the policy under consideration was not liberal enough. We did not count the liberal no votes as yes votes — we just threw them out, treating them as non-votes instead.

But what if we don’t build in an exception for the so-called “liberal no’s” — that is, simply take every vote at face value? It turns out, then, that Davis is no longer the least valuable Democrat. Instead, it is Dennis Kucinich, who voted against health care, the hate crimes bill, the budget, the cap-and-trade bill, and financial regulation — all ostensibly from the left — in spite of coming from from the strongly Democratic Ohio 10th district near Cleveland. 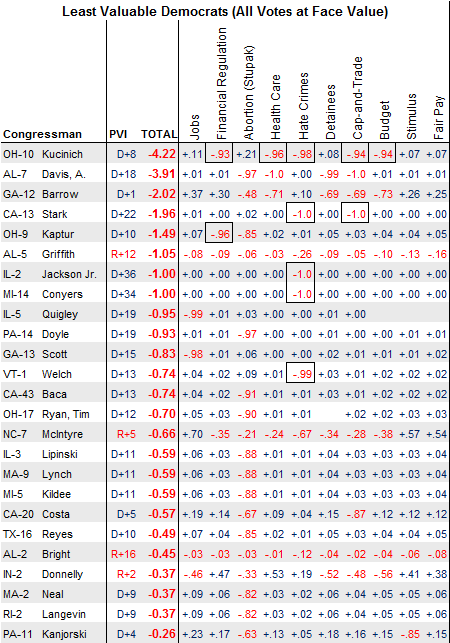 (Note: votes with the black outline around them are those that we had originally classified as liberal no’s.)

Obviously, I think a reasonable case can be made to build in an exception for opposition from the left, which is why I did so in the first place. On the other hand, the fact is that Kucinich isn’t taking just the occasional symbolic stand: he’s voting against his party on key agenda items about half the time. Perhaps by so doing, he’s moving the Overton Window to the left, or perhaps he’s just being a pain in the butt. We crunch numbers, you decide!