As Chuck Todd said the other day: “If this were any other state we’d say this one was over, [Scott] Brown is going to win”. But, Massachusetts isn’t any other state; it’s one of the bluest in the country and one where Republicans rarely prevail.

The polls, however, suggest that the Republican might win this time, with Scott Brown ahead in both the Suffolk and ARG polls — as well as, reportedly, his opponent’s internals. Should the fact that Massachusetts is usually so blue, however, provide any comfort to Democrats? Or is this just wishful thinking — that is, Massachusetts’ blue-ness has already been efficiently “priced in” to the polling?

This lends itself reasonably well to empirical study, as there have been other cases in the recent past when a Republican was polling competitively in a very blue state. Specifically, I looked at all Senate races since 2000 in which: (1) the state was very blue with a PVI of D+7 or higher and, (2) the final polling average* showed a single digit margin. Did Democrats outperform their polls in these states? 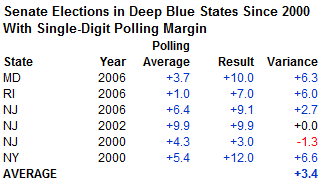 There is some evidence that they did. In all six cases, the Democrat was favored anyway, and the Democrat indeed won. But they won by a somewhat larger margin than the polls anticipated — by an average of 8.5 points versus a polling average of 5.1, a difference of 3.4 points. The most notable differences were in New York State in 2000, where polls showed Rick Lazio almost beating Hillary Clinton but Clinton won going away, and in Maryland 2006, where Ben Cardin defeated Michael Steele by a larger-than-anticipated margin. Sheldon Whitehouse also beat Lincoln Chafee in Rhode Island by a significantly wider margin than the polls anticipated.

If this pattern is at all robust, we might also expect it to apply to parallel cases in very red states where the polls projected a Democrat performing competitively. Indeed, there is some evidence of this too: 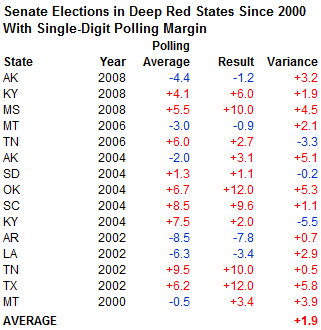 In states with a PVI of R+7 or greater, the Republican candidate outperformed his polls in 12 of 15 cases, by an average of 1.9 points. The tally would increase if we included Nebraska in 2000, which does not qualify because the only nonpartisan poll showed Ben Nelson winning by more than ten points, but Nelson in fact won by just 2.2.

Combining the Democratic and Republican cases, the “home state” candidate (e.g. a Democratic candidate in a very blue state) outperformed his polls in 16 cases and underperformed them in 4. On average, the final margin was 2.3 points better for the candidate than the polls anticipated.

Although this is a quick and dirty analysis on a number of levels, it does provide some hope to Coakley. On the other hand, there are cases like Ted Stevens in Alaska in 2008, where the candidate finished closer than the polls anticipated but still came up a little short.

* The “polling average” is taken from Pollster.com for 2008, and RealClearPolitics for 2004-2006. For 2000-2002, I calculated it myself from PollingReport.com by taking a simple average of all nonpartisan polls released within the final two weeks before the election.