Only 40 percent of girls and 22 percent of boys ages 13-17 had finished their course of three shots for HPV by 2014. For comparison, 88 percent of boys and girls in the same age group received their Tdap (tetanus, diphtheria and pertussis) shot.1 The United States has set a goal of vaccinating 80 percent of girls against HPV as one of its Healthy People 2020 objectives, and, according to Shannon Stokley, an epidemiologist in the Immunization Services Division of the CDC, “We have a long way to go to get to 80 percent; it’s hard to tell if we’re going to reach it by 2020.” However, Stokley told me she believes the success of the Tdap vaccine shows that these rates are achievable, if states and doctors keep educating parents about how vaccinations can protect their children from cancer. Although many people who get HPV do not develop cancer, the virus is the cause of almost all cervical cancers and 91 percent of anal cancers.

The good news is that, even when vaccination rates are lower than those of other diseases, there can be big herd immunity effects for sexually transmitted infections. Unlike many infectious diseases, STIs aren’t spread through mere proximity, so one way to understand the impact of vaccination rates for STIs is to look at the chance that at least one partner in a sexual encounter will be vaccinated. As long as one partner is vaccinated, the chain of contagion is broken. In the U.S. as a whole, 53 percent of randomly chosen heterosexual teen couples would include at least one vaccinated partner.2

Of the five worst-performing states, three have no laws about HPV vaccinations (Tennessee, Arkansas and Kansas) and two have begun HPV education campaigns (Utah and Missouri). The Kaiser Family Foundation found that most states (29) have no HPV vaccination mandates, education programs or funding to cover the cost of the vaccine. 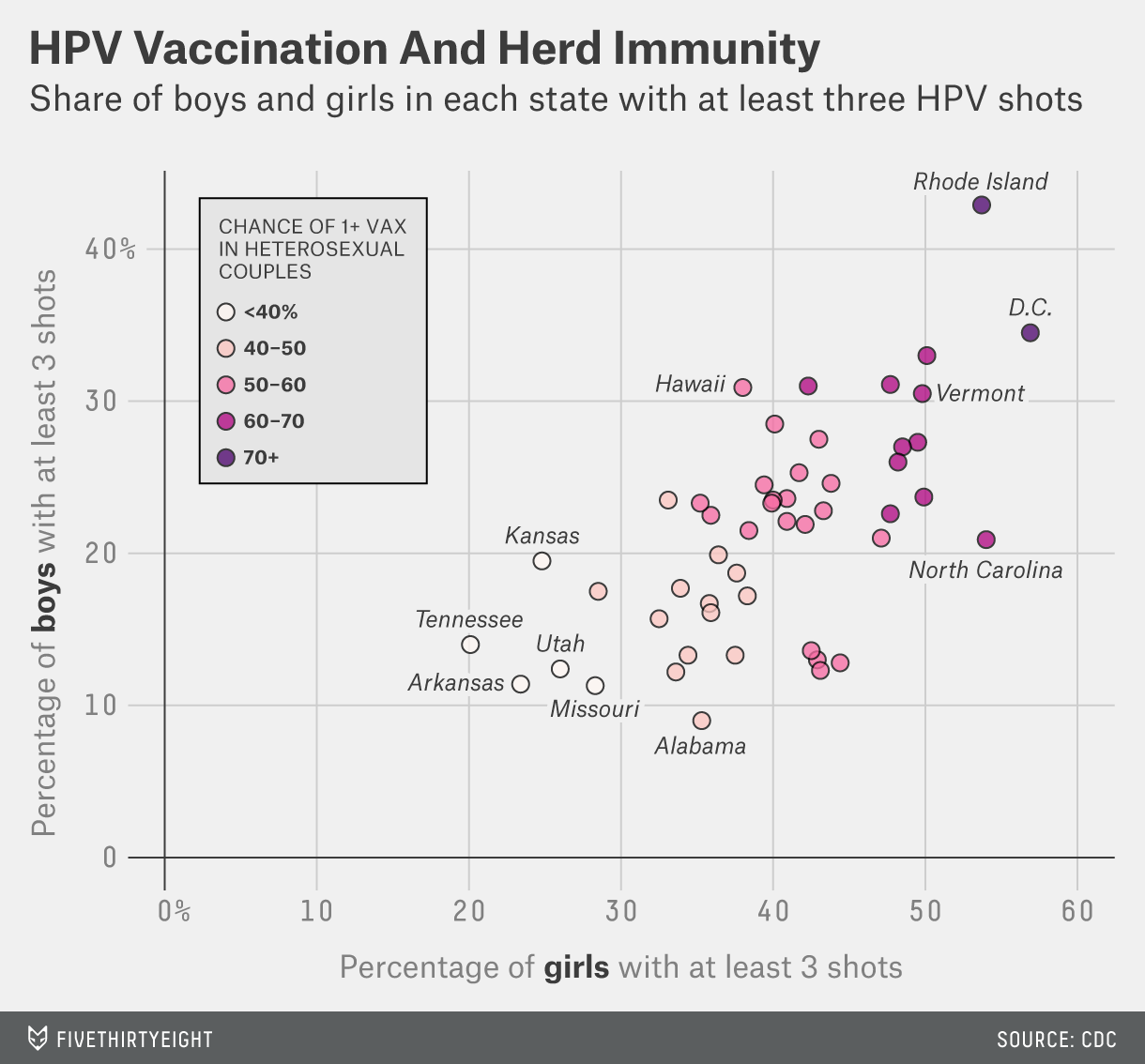 Using the CDC data, we can calculate that, on average, states do better to increase vaccination rates among girls than among boys. Here’s what happens to the chance that at least one person in a heterosexual encounter will be vaccinated when all states increase their vaccination rate for girls, boys or both by a fixed number of percentage points.

Vaccinating girls makes more of an impact because, when it comes to sexually transmitted diseases, it can help to have lopsided vaccination rates. If all girls were vaccinated, every heterosexual pair would include a vaccinated partner. If half the population were vaccinated (an even share of both boys and girls), only 75 percent of boy-girl pairs would have at least one vaccinated partner.

For that reason, a 2011 study in the Journal of Infectious Diseases found that, provided vaccination rates in girls were high enough, there wasn’t enough benefit in vaccinating boys to justify the cost. But, when vaccination rates among girls are low, as they are in the U.S., adding boys can be worth the cost. The study found that the cost didn’t justify vaccinating boys when coverage among girls reached 70 percent. No U.S. state has reached that level; only four states have vaccinated more than half of their girls, and none has vaccinated more than 60 percent. Stokley says this makes immunization of boys critical; the vaccination rates for girls are too low for teens of either sex to trust too much to herd immunity.

CORRECTION (Aug. 5, 5:40 p.m.): An earlier version of this post omitted New Jersey from the table of states’ vaccination rates. We have updated the table.