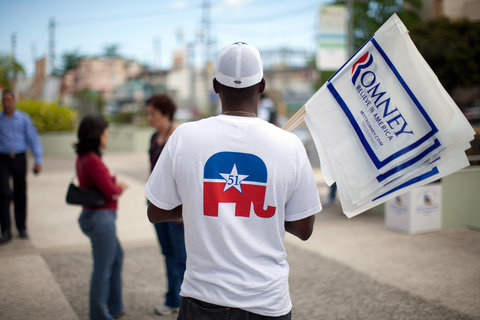 Forecasting the outcome of the Republican primary in Puerto Rico is tricky. No polling has been done in the race, and it is an outlier in almost every sense.

And the 2008 Republican contest in Puerto Rico offers little guidance: only 208 voters participated when a caucus rather than a primary was held. Turnout is expected to be much stronger this year, with some estimates as high as 400,000 people voting.

Mitt Romney, the former governor of Massachusetts, has several advantages in Puerto Rico, chief among them is the all-consuming political issue on the island: statehood. Not everyone is for it, but it is the principal political dividing line on the island. Generally, on the pro-statehood side is the New Progressive Party, which identifies with mainland Republicans. The Popular Democratic Party identifies with mainland Democrats.

In the context of a Republican primary, a majority of voters are likely to align with the Progressive Party and favor statehood, and that favors Mr. Romney. He has been unambiguously supportive of Puerto Rico’s right to become a state.

Mr. Romney abandoned his usual stump speech during his time in Puerto Rico, instead offering shorter remarks — often just over five minutes — and using his time to stress his support of statehood should a majority of the voters there decide that is what they want.

Mr. Santorum, however, caused a minor maelstrom when he suggested that statehood should be contingent on the island making English its official language. He later tried to qualify those comments, but the damage may have been done.

Mr. Romney also has the support of much of the New Progressive Party establishment, including Gov. Luis G. Fortuño. In many cases endorsements might mean little, but this is one of the potential exceptions. The Republican candidates are mostly unknown in Puerto Rico, so a prominent endorsement may have outsized influence.

Although Mr. Romney did not attract huge crowds at the two solo events he held on the island, his rally Saturday night in Old San Juan — where he shared the stage with Mr. Fortuño and roughly half a dozen Puerto Rican legislators — drew a large, boisterous audience.

For all Mr. Romney’s advantages, he does have some weaknesses, including his criticism of Sonia Sotomayor, the first Supreme Court justice of Puerto Rican descent. He has also been one of the more outspoken candidates on illegal immigration, a stance unlikely to be popular among Puerto Rico’s electorate.

The island’s 20 at-large delegates are allocated proportionately to candidates who meet a 15 percent threshold. Unless, that is, a candidate wins more than 50 percent of the vote, in which case that candidate is awarded all 20 delegates.

Mr. Romney will likely win a plurality of the island’s votes and delegates. Whether he can cross the 50 percent threshold and trigger winner-take-all rules may be the most important thing to watch.