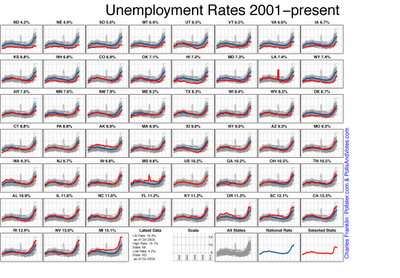 Starting in the top-left corner, the states are sorted from lowest to highest unemployment rate. At first glance, what’s interesting is that most states are below the national mean of 10.2 percent, because several very big states are above it: California, Florida, Illinois, North Carolina and Ohio being among the top-11 states whose electoral vote totals alone are sufficient to reach the 270 plateau.

Yes, the electoral college…the subject I really wish to raise as it relates to unemployment levels, specifically to ask: How will unemployment levels affect President Obama’s re-election chances? Yes, I know it’s three years until election day and that the unemployment figures will move between now and then. And yes, they will not move identically in every state, so there will be some re-sorting. But Michigan and Nevada aren’t going to suddenly vault from the nation’s highest unemployment rates to ten lowest, and vice versa for North Dakota and Nebraska, the states with the two lowest rates.

That said, I decided to scatterplot just the 18 states where the margin last year between Obama and John McCain was 12 points or less, with that margin plotted against the current unemployment rates. (I put the national average of 7.3 percent margin and 10.2 unemployment in there as a baseline.) Here are those 18: 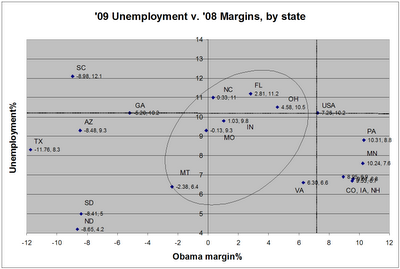 Let’s assume the states Obama lost by double-digits, along the left side of the graph, are not going to flip his way in 2012. For the moment–but only for the moment–let’s further assume Obama will again carry the states in the bottom-right corner that he won by comfortable margins and that happen to have lower-than-national-average unemployment rates. I realize that just because the average in a state is below the national median doesn’t mean there isn’t economic suffering in that state, or that that economic pain will not be expressed at the ballot box in 2012. But for a moment, let’s set those states aside to focus on the small subset of states I’ve highlighted with the oval.

These six states–Ohio, North Carolina, Florida, Indiana, Missouri and Montana–four of which Obama won and two he lost narrowly, could again be key bellwethers. Economically speaking, they are a mixed bag of industrial, mining, tourist/citrus, and textile/hogfarming states. The good news for Obama is the general trend among these six–the worse the unemployment the better he did. That is, he’s got more electoral room to spare the more he needs it, at least from a standpoint of unemployment rates.

But let’s assume Obama loses all six–which means four states net, since he lost Missouri narrowly and Montana by a few points. The net electoral vote loss could be as many as the current, combined 73 electoral votes. (We have to wait for reapportionment to be sure, of course.) Subtracted from his 365 total last year, that would put Obama under 300 at around 292, presuming he holds all the solidly Democratic states that do not appear on the scatterplot because of their wide margins, as well as those in the bottom-right corner which provided him comfortable margins last year and have worrisome, yet below-national-mean unemployment rates.

…which returns us to that little cluster of states in the bottom-right. We just saw what happened in Virginia, the state closest to yet outside the oval. I know about the contrarian pattern of the VA/NJ off-year election results relative to presidential results, but for the sake of argument let’s assume a rejuvenated GOP in Virginia pulls that state back in 2012. That would drag Obama’s EV total down to 279, within range of an average-sized size tipping the result in the other direction.

Which means that, if unemployment woes continue, the election could come down to a block of states like Minnesota, Pennsylvania and Iowa. That’s not an earth-shattering finding per se. But what it does mean is that Obama had better pay special attention to them now if he wants to insulate himself in a close election. He can afford to lose some, even all of those in the oval…but he can’t afford to lose all of those and any near it.