Continuing my series of posts about changing partisan control of state legislatures, I was curious to see how much progress on a state-by-state basis the two parties made in the 12 years since 1994’s so-called “Republican Revolution” cycle. Among the top gainers for each party, there were some surprising results–at least for the Democrats. 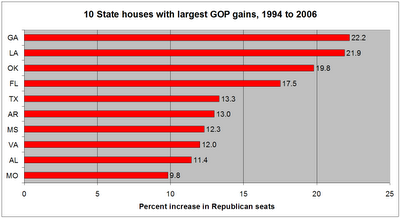 The two figures show the top 10 states in terms of share of house/assembly seats for the Republicans and Democrats, respectively. Looking at the Republican figure, there are no real surprises here: The 10 states where the GOP made its largest strides during those dozen years include eight former Confederate states, plus the border South states of Oklahoma and Missouri. It’s clear from this, as well as congressional and Electoral College patterns, that Georgia and Louisiana are running counter to the rest of the country more than any other pair of states in America.

The real surprises are the big Democratic shift states.

As the second of the two figures shows, the top 10 here are more of a mixed bag. Mountain and plains states predominate; Washington, Colorado, Nevada, Montana, North Dakota are all on the list. This is partly attributable to the reversal of significant gains the GOP made up through and including the 1994 election, but also important strides made by Democrats out West this decade.

Then there’s New Hampshire, whose story is more recent, as the Granite State quickly shifted from having two Republican congressmen, a Republican governor, and Republican control of both chambers to a Democratic-controlled state from top to bottom. NH’s overall Democratic growth over the 1994-2006 period is outpaced only by Washington state’s stunning change. 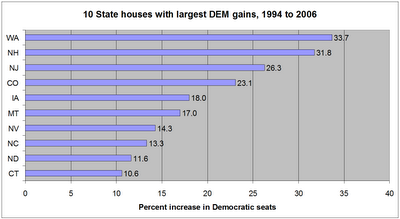 But the most obvious outlier of the bunch is North Carolina, which has proved itself a regional outlier. And remember, these are results calculated prior to the Democrats’ 2008 victories in the House, Senate and for Barack Obama. (FWIW, I chose 2006, not 2008, as the point of comparison because both years are midterm cycles.) It’s clear to me–yes, selfsame author of Whistling Past Dixie–that the Tar Heel State is the new Virginia, and proceeding in the same direction as its northern neighbor at a rate faster than I recognized or expected.