We knew things were getting pretty bad for Governor David Paterson of New York, but this probably takes the cake: former Governor Eliot Spitzer, who resigned last March after allegations that he patronized a high-price prostitution service, is now more popular than Paterson, according to a new poll (.pdf) by Cornell University and the New York Times. Just 21 percent of registered voters in New York State have a favorable view of Paterson, the poll finds, while 50 percent have an unfavorable view. Sptizer’s numbers are marginally better, at 26 percent and 44 percent respectively. 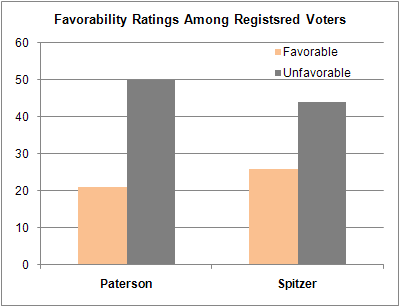 The poll also sheds some light on why Paterson is so unpopular. When asked to name the worst thing that Paterson has done since becoming governor, 23 percent of New Yorkers mentioned taxes or the concomitant issue of the state budget. This compares to just 6 percent who mentioned the handling of the appointment of Kirsten Gillibrand to the U.S. Senate, and 5 percent who cited the governor’s push for gay marriage — indeed, more voters mentioned gay marriage as a positive trait for Paterson than a negative one. 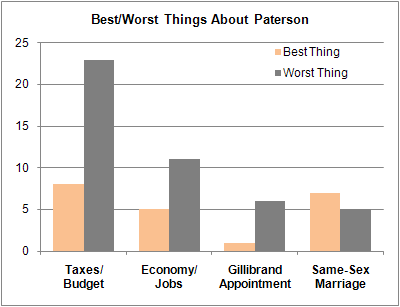 One wonders, however, what Paterson might reasonably have done differently. According to the Center on Budget and Policy Priorities, New York, which was hit especially hard by the attrition to its tax base due to the financial meltdown, faces a 2010 budget shortfall equal to 29.0 percent of its 2009 general fund. This ranks it fourth in the country behind California, Arizona and Nevada, and well ahead of the (unweighted) national average, which is 13.7 percent. 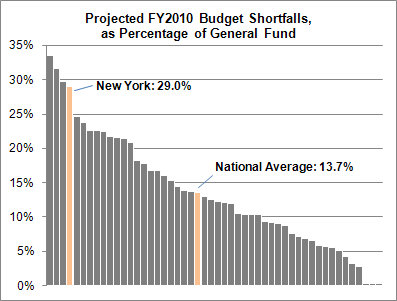 New York chose something of an all-of-the-above approach to address its budget deficit. A net of about $7 billion will be raised from tax hikes: $4 billion from increased income taxes on upper-income taxpayers, $1.5 billion from the rollback of property tax rebates, $0.6 billion from taxes on utilities, and roughly another $1.0 billion from miscelaneous taxes and fees. Although New York will nominally cut its spending by $6.5 billion, the deficit is more than made up for by an infusion of $7.2 billion in federal stimulus funds.

Nevertheless, as compared with budget solutions passed by other states, New York’s is probably relatively more redistributive: most of the tax hikes fall on high-income earners, while key services were protected more than they otherwise might have been. New York enjoys a somewhat complicated relationship with its wealthiest residents. While, on the one hand, it is undeniably one of the most progressive states in the country, full of union workers, recent immigrants, and Manhattan liberals, on the other hand it is somewhat less likely than other progressive states to demonize the rich: New Yorkers tolerate and even applaud the accumulation of vast sums of wealth, and take pride in the state’s financial sector.

New York is neither a good state for a libertarian nor a good state for a populist; if there’s any leadership style that seems constituently to work in New York, it’s the Bloombergian, almost 19th Century one of the benevolent plutocrat. This may have made Paterson’s task especially difficult; while concentrating the tax hike on the rich may have been no worse for him than the alternatives, there weren’t many people willing to give him bonus points for leveling the playing field.