The fluctuation in coverage of McCain compared to the steadiness in coverage of Obama mirrors the complaint from Republican corners that McCain’s team has been reactive and struggled to provide a clear and consistent message beyond “Don’t vote for Obama.” 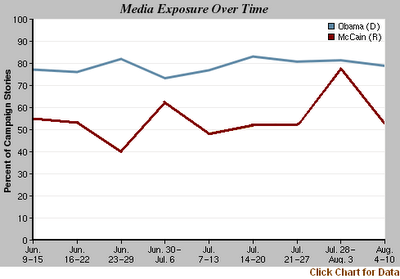 The level of McCain’s media attention undulates with the traction of any specific way McCain articulates that core argument. Spears-Hilton gained McCain more attention because it was a surprising and original angle for attacking Obama. But the upshot remains: McCain is dependent on Obama for his messaging; Obama’s messaging is independent. Notice how flat the line is for Obama coverage. McCain’s line is all over the graph. That’s a strong statistical signal McCain’s message team is not in full control.

Notice the Boston Globe’s recent visual depiction of the different most prominently featured words on each candidate’s official blogs.

Little wonder that stories about McCain are more easily pushed aside; McCain’s own stories are mostly about Obama; McCain gets more attention by attacking in unexpected ways – Spears-Hilton Week was unusual and so the “Look what McCain’s doing!” and “What is McCain thinking with this?” stories led to his tying Obama that week in news coverage.

But unless and until John McCain can consistently drive a message untethered to Barack Obama, expect to see the news coverage graph to stay the same – a stable Obama line and a zigzagging McCain line.