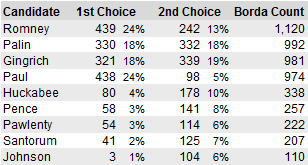 By a single vote over Ron Paul, Mitt Romney won among first-choice preferences, 439 to 438. Sarah Palin and Newt Gingrich were just a few votes apart from each other at 330 and 321, good for 18 percent each.

Some reports from New Orleans indicate heavy, coordinated lobbying on behalf of the Paul and Romney campaigns. I don’t doubt it; we saw the same thing at the recent CPAC meetings on behalf of Paul, who brought a lot of motivated young people out to support him. So it’s interesting to look at the secondary preferences because, presumably, strategic supporters of Romney and Paul would know better than to cast their second-choice votes for the other guy.

And sure enough, neither Romney nor Paul led among second-choice preferences: Southerner Gingrich was first with 339 votes, followed by Palin (332), with Romney (242) in third. But the glaring result here is that Paul, with just 98 votes, finished ninth and last among second-choice preferences–even behind libertarian former New Mexico Gov. Gary Johnson. In other words, Republicans either like Ron Paul or they don’t like him. He’s almost nobody’s fall-back choice. (Btw, I must confess I didn’t even know Johnson was running for president until I saw this straw poll. What’s going on here? Is he a potential slate ticket running-mate for Paul, himself a libertarian non-interventionist?)

With two choices revealed, we can compute an abbreviated Borda Count by assigning two points for every first-place vote and one for a second-place vote. The Borda Count, displayed in the final column, re-sorts the results in interesting ways. Romney is still in first, but Palin and Gingrich and Paul all move into a virtual tie for second, with just a few points separating them. Palin and Gingrich obviously have much deeper appeal than Paul.

One final observation, in the form of a question: Why is Huckabee struggling among southern Republicans? Obviously, he and Gingrich eat from the same, southern bowl. And I gather that many social conservatives in the region are in still in love with Palin, even if she hails from a state as far away from the South as possible, which also draws support away from the former Arkansas governor. But Huckabee was not just fifth but a very, very distant fifth. I emphasize this point to reiterate my gut feeling that Gingrich is the GOP’s 2012 sleeper candidate.