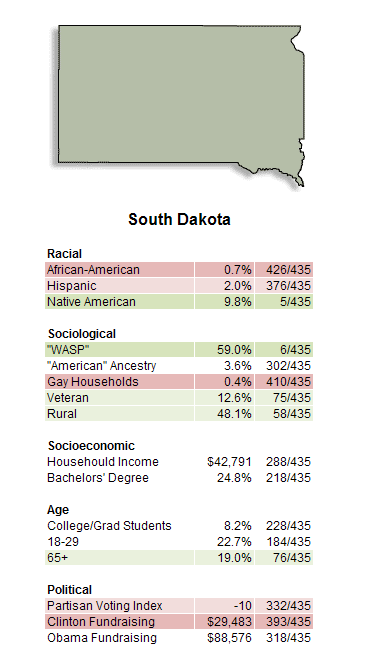 I thought that South Dakota was going to be a fairly simple little state to project. But it’s actually rather idiosyncratic, in ways that tend to perplex the model.

What Barack has going for him: For the most part, South Dakota is as white as a fresh snowfall over Sioux Falls. If we treat it as a congressional district (which is exactly what South Dakota is), it ranks 426th out of 435 in terms of the percentage of African-Americans. But it’s also a certain kind of white — the whites that we call “WASP”s and which represent people of German, English and Scandinavian descent. Barack Obama has tended to do well with those kinds of white people, who are also fairly prevalent in (for example) Oregon and Wisconsin.

What distinguishes South Dakota, however, is its extremely large Native American population. Nearly 10 percent of its population is in whole or in part Native American. Although Native Americans have fairly low turnout rates — they tend to vote Democratic when they do turn out. So we can probably expect a similar share in tomorrow’s electorate.

Which candidate tends to do well with Native Americans? So far as I can tell, there is no polling data on this issue. Frustratingly, in the other states with sizable Native American populations like New Mexico and Oklahoma, Edison-Mitofsky just lumped them into the “other” cateogry in its exit polling and did not break out their data.

But the regression model is fairly well convinced that this is a good group for Barack Obama. The case of New Mexico in particular might be instructive. New Mexico is a relatively poor and heavily Hispanic state, but Obama, somewhat unexpectedly, nearly tied Hillary Clinton there. He also performed much better in AZ-1, which has a huge Navajo population, than you’d anticipate from the underlying demographics. And he did exceptionally well in Alaska’s caucus, another substantially Native American state.

There are, naturally, some counterexamples; Barack Obama didn’t perform well in Oklahoma for instance (although he barely fielded an organization there). But the relationship is fairly substantially statistically significant, and it dovetails with anecdotal evidence that suggests that Obama’s Native American outreach has been unprecedented in its breadth. Native Americans could save Obama in South Dakota — either bringing him a victory that he might not have earned otherwise, or keeping the margin close in the event of a loss.

As an aside, Native Americans are also a reason why South Dakota might be difficult to poll. I have no idea about the mechanics of reaching someone by telephone on an Indian Reservation (reservations occupy perhaps 20 percent of South Dakota’s territory). And if you’re not used to polling the state, you might not know enough to recognize their absence.

What Hillary has going for her: Although South Dakota might quite be Clinton’s kind of white, it still is very white. It’s a fairly old state, and rather uniformly middle class. Unlike some other Western states, where the Democratic half of the electorate can actually be quite liberal, South Dakota’s Democrats gravitate toward the political center. And it has a closed primary, which our model is (finally) getting around to recognize as a slight advantage for Clinton.

But Hillary probably would not be especially likely to win South Dakota if she hadn’t spent quite a bit of time there. The New York Times records her as having made 10 campaign appearances in the state, an exceptionally high ratio relative to the number of delegates available. Obama (quite wisely I think) returned to South Dakota over the weekend, and so this is not a case of Obama blowing off a state like he did in West Virginia and Kentucky. Still, the advantage in time spent on the ground is worth several points to Hillary.

Although South Dakotans aren’t very much like Kentuckians, there may also be some truth to the notion that these are the types of voters that Clinton is doing better with than she had been earlier in the nomination process. I played around with a whole bunch of different interaction variables related to the timing of different primaries, leading to some versions of the model that showed Clinton a few points ahead in South Dakota. However, this led to a messy model with all sorts of multicollinearity issues, so what I eventually did was to compromise by removing the interaction variables, but giving more weight to recent primaries in determining the regression coefficients.

That brought Clinton a couple of points closer to Obama, and if I’m wrong about something like Obama’s performance among Native Americans, she could very easily win South Dakota (it should probably be thought of as a “toss-up”). Even a win of some magnitude (high single digits or very low double digits) would not completely stock me; I’m not saying that this is the most likely scenario, just that it’s a difficult enough state to pin down that we shouldn’t rule it out.

Still, this is not a state with an especial amount of affection for Clinton — witness, for instance, her exceptionally poor fundraising numbers. Something like the ARG scenario seems completely batshit crazy to me.

Delegate wise, with just one congressional district, South Dakota is completely boring. The final split will almost certainly wind up being 8-7 for one or the other candidate. A candidate would need to win by 22.2 points to get a 9th delegate, and would earn a 10th delegate if they won by 25 points. So our delegate projection is Obama 8, Clinton 7.