The fellas at Open Left have dutifully responded to my delineation between “rational” and “radical” progressivism and attendant critique of the latter. David Sirota has issued a characteristically self-aggrandizing response; I am going to start instead with Paul Rosenberg’s reply, which is less personal and more thoughtful.

1. Let’s not say “progressive” when we mean “populist”

What I don’t get, however, is why Paul, being acutely aware of this, tends to use the terms “populism” and “progressivism” interchangeably. David Sirota does this too; in fact he frequently takes things a step further, speaking not just as a “progressive” but often deigning to speak on behalf of progressives.

By “means” I refer to a “theory of change”, by “mode” I refer to something close to a style or even a brand. These definitions are of course complementary, although there are some politicians (Barack Obama probably among them) who borrow from the populist brand without really endorsing its mechanisms.

What populism is not, however, is a cogent political philosophy unto itself. Politicians including Franklin Roosevelt, Theodore Roosevelt, John Edwards, Sarah Palin, Ronald Reagan, Adolf Hitler, Hugo Chavez, Bob La Follette, Bill Clinton, Ross Perot, Newt Gingrich, George Wallace, Boris Yeltsin, Mike Huckabee, Joseph Stalin, Ron Paul and Ralph Nader can all be accredited with adopting populist framings to some degree or another — obviously they would not agree on very much in terms of the desired outcomes of their endeavors. Just as obviously, populism has been marshaled as a force for both tremendous good and tremendous evil at various points in history. In Europe, which has had more first-hand experience with the latter, “populism” tends to have a pejorative meaning; we have a more neutral impression of it in the Americas.

Hence, we need a better understanding of what Sirota’s goals are.

3. In Sirota’s case, the immediate-term goal appears to be the dissolution of corporate power.

We can say this comfortably because Sirota says the same thing himself; defining populism as “challenging corporate economic power”. Sirota also frequently critiques government elites, but usually only to the extent that they are complicit in entrenching corporate power. This is all good enough and well enough; corporations are not very popular these days and lately they have done a lot of stupid and awful things. Notice, however, that Sirota does not place any modifier (such as “corrupt”) next to “corporate economic power”. He appears to regard corporate economic power as intrinsically evil. There aren’t a lot of shades of gray; there isn’t a lot of distinction between Exxon and Apple, between MBNA and Starbucks.

4. A world dissolute of corporate power implies one of two things: state socialism or social anarchism.

When I suggest that Sirota’s modes of thought are Marxist, I don’t mean that figuratively. I mean that literally: the logical conclusion to his project is some version of a workers’ state. If there were more nuance in Sirota’s thinking, I might guess differently at his desired outcome (for example, European-style social democracy). But there isn’t — he exists in a world of Good Things and Bad Things and Capital Letters — and so I don’t.

Take, for instance, Sirota’s oft-voiced disdain for Clintonism and neo-liberal economics. If your concern is for the economic well-being of the working class, than attacking Clinton is a strange place to start. Under his presidency, real household incomes for the bottom 10th percentile — a pretty good Rawlsian metric for economic well-being — increased by 17.3 percent, the largest increase of any president since the Census Bureau began compiling numbers (.pdf) on this statistic. 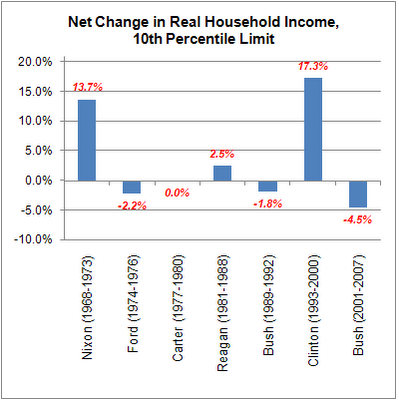 One can certainly raise various critiques of Clinton’s presidency, many of which I’d wholeheartedly agree with, but in broad strokes his economic program would seem to have been a tremendous success, particularly for the working poor. (Although the wealthy certianly also fared well under his presidency; growth in income was remarkably evenly distributed between all income classes under Clinton).

5. The political goals of Sirota, if enacted, might be acutely harmful to the working class.

And this is what ultimately bothers me about Sirota. Compare the experience of the working class under Bill Clinton to that of the Soviet Union, which had infant mortality rates about three times that of the United States, significantly shorter life expectancies, extremely high rates of alcoholism … life was not good. Not that I’ll have to spend much time convincing you about most of this.

To be fair, I don’t know that David would literally endorse a Soviet-style economic order over Clintonism … but given the lack of restraint and qualification that he tends to place on his opinions, he should think more carefully about where his conclusions lead. In the real world, we need to recognize that corporations contribute to the economic well-being of the working class as well as detract from it; that neither unbridled laissez-faire capitalism nor socialism are anything approaching acceptable solutions, and that the trick is finding the optimum amount of regulation.

6. More broadly, populist movements may not always benefit their participants.

And to bring things full circle, one of the ironies of populist movements is that they do not always work out well for the people whom they purport to enlist in their cause. Take the What’s the Matter With Kansas? argument: Was Ronald Reagan a good president for the working poor? No, but in 1984, about 60 percent of non-college graduates voted for him. This duality is more obvious in some of the European-based examples. Perhaps there are organic strains of populism that are truly self-generating, but there are also synthetic versions that consist of elites manipulating popular opinion on their behalves and wielding it as their chalice, sometimes to disastrous effect.

___
Addendum: You know what, this has obviously gotten a little carried away. The problem with Sirota is that his arguments are self-righteous, accusatory, and oversimplistic. Here, we generally aim for nuance and poise. To the extent that this post has not reflected that spirit, my apologies. I’m going to make one last substantive observation about the Clinton economic record in a separate post … and then we’re done with this.