Some Democrats think they’ve found a great smoky hope in state ballot measures seeking to legalize marijuana. Come November, Alaska will vote on whether to make recreational marijuana legal, and several other states are thinking about doing to the same. In Alaska, the referendum will appear on the ballot alongside a competitive U.S. Senate race between Democrat Mark Begich and an as yet undecided Republican. The Begich campaign declined to comment on whether it expected pot to help its chances,1 yet the idea that pro-marijuana ballot measures can help Democrats makes sense. Young voters, who are very much in favor of marijuana legalization and who tend to lean Democratic, haven’t made up as high a percentage of voters in midterm elections as they do in general elections; if they come out to vote on pot, maybe Alaska Democrats can get their candidate into office.

But there’s some contradictory evidence from another source: The government’s Current Population Survey (CPS) didn’t show anywhere near the increase in young voters that exit polls did. The Census Bureau found youth turnout rose by 0.2 points in Colorado, dropped by 0.9 points in Oregon, and dropped by 2.7 points in Washington from 2008 to 2012, an average 1.2-point drop across all three states. This drop is pretty much the same as the 1.5-point drop in young voters nationally, as measured by the CPS.

There’s reason to think we should trust the CPS more than the exit polls. The latter aren’t designed to estimate the ages of voters, as the Center for Information and Research on Civic Learning and Engagement has pointed out. That’s not to say CPS estimates are immune to margin of error. But a third source of evidence backs up the CPS: pre-election polls. In Colorado,3 Oregon4 and Washington5 a variety of pollsters had numbers more in line with the CPS than the exit polls.

We can also look at prior years’ recreational marijuana ballot measures, including those that sought to legalize, decriminalize or lessen the penalty for recreational marijuana. For the 14 such ballot measures since 1998, the voting pool was made up of 0.2 percentage points fewer 18- to 29-year-olds, according to the CPS, compared to the prior similar election (i.e. the prior midterm for midterm years and the prior presidential election for presidential election years). 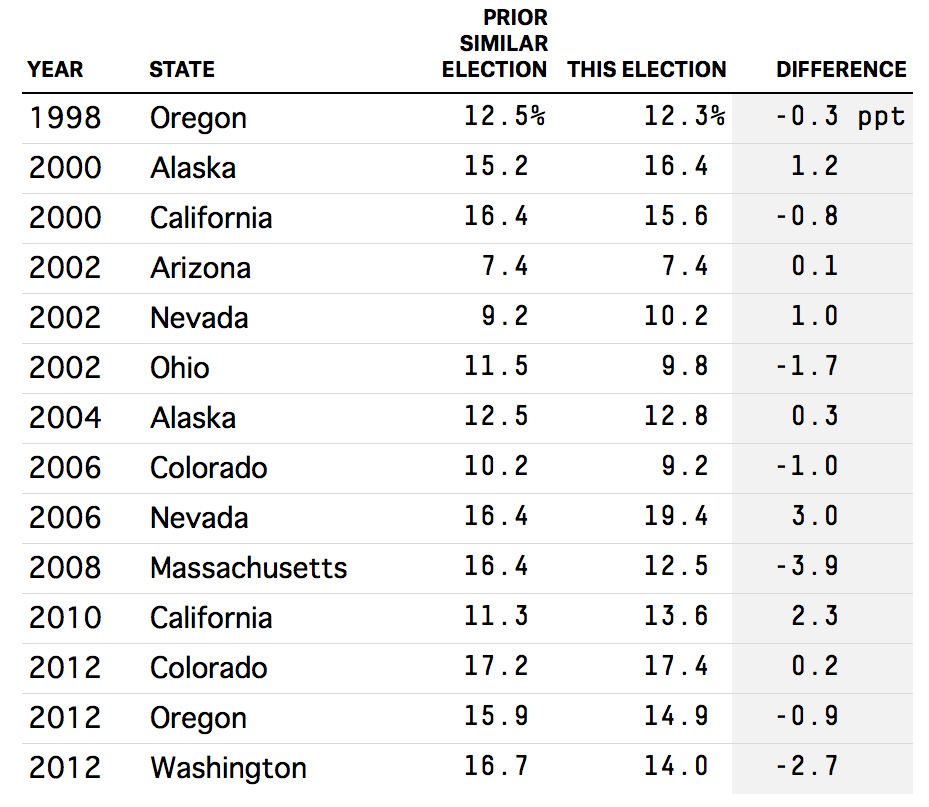 Looking only at the midterms, the 18-to-29 demographic rose 0.1 percentage points on average. Once again, marijuana on the ballot doesn’t appear to have made a difference in whether young people voted.

Past research by political science professors Caroline Tolbert and John Grummel of Kent State University and Daniel Smith of the University of Denver showed that ballot measures drive up voter turnout overall. And in 2012, when pot was on the ballot, significantly more voters turned out in both Colorado and Washington, though not in Oregon, where the referendum didn’t pass.

But those voters didn’t help Democrats. There was no relationship between a change in turnout in these three states and how well President Barack Obama, or marijuana, did in individual counties. On average, Obama lost the same amount of support in these states — 3.4 points from 2008 — as he did nationally. None of this proves that marijuana wasn’t helpful for Democrats among a subset of voters, but it suggests that the overall effect was small and fairly neutral.

The good news for Begich is that the marijuana referendum almost certainly won’t hurt him. His race looks tight, but the polls are still sparse and unreliable. A slim majority of Alaskans support legalization, according to a March poll by Dittman Research,6 one of the few pollsters to predict Lisa Murkowski’s 2010 write-in Senate victory.

If Begich really wanted to tap into the marijuana vote, he could try something Obama didn’t: embrace legalization. (Begich hasn’t yet.) Marijuana could act as a priming effect to convert voters who might not otherwise vote for him.7 Sometimes to win, you have to take a risk. Best to inhale deeply first.

Correction (May 1, 9:25 p.m.): A footnote to this article originally misstated that the Begich campaign expected a boost from other measures on the ballot this November. The campaign simply pointed out that other measures besides marijuana legalization would be on the ballot.