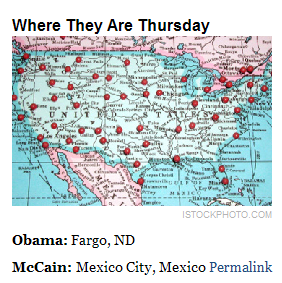 But a quick sampling of what visiting a state like North Dakota can do for you: check out this editorial from the Fargo Forum, which endorsed George W. Bush in 2004:

[North Dakota] hasn’t gone for a Democrat since Lyndon Johnson in 1964. It’s been reliably “red” in presidential contests for 40 years. The suggestion that the state is taking on a shade of purple – it could go either way – seems ludicrous, especially to Republican faithful who can’t conceive of North Dakotans tilting blue.

Well, that’s what Republicans thought about New Hampshire, where Bill Clinton won twice, where Sen. John Kerry won in 2004 and where George W. Bush won by a thin single point in 2000 over Al Gore. The state’s Democratic governor won re-election in 2006 with a whopping 74 percent of the vote.

North Dakota is not New Hampshire, but at least one public poll and several “internal” polls suggest Obama has a chance to beat McCain in the Peace Garden State. The polls are intriguing because they are the first indications that North Dakota’s 40-year Republican grip on presidential politics is not as strong as it once was. Not weak, mind you, but not a guarantee.

State Republican Party officials tend to dismiss Obama’s appeal to North Dakotans. But remember, these are the same people who endorse congressional candidates […] who rarely get an anemic 30 percent of the vote against Democratic incumbents. These are the same people who grudgingly support Gov. John Hoeven only because he’s wildly popular; some of them believe he’s not “Republican enough.” Their analysis of Obama’s chances is partisan boilerplate.

No one should conclude that Obama has a lock on North Dakota. He certainly does not. But given the surprises in this year’s presidential campaign, it would be unwise to assume McCain has the lock. That’s the dynamic the Obama campaign senses, and that’s one reason he’s in North Dakota today.