The Associated Press has one of those horror stories out about the family that couldn’t afford their airfare to from Syracuse, NY to Omaha, NE for Thanksgiving, and so decided to take the train instead. Over at the Atlantic, Daniel Indiviglio picks up on the theme, bemoaning the surcharge that some airlines have started to charge for holiday travel.

I can’t speak to holiday airfares in particular — my parents came to visit me in New York City for Thanksgiving this year, and because of circumstances that have nothing to do with price, I’ll also be staying on the East Coast for Christmas this year. Certainly I feel some sympathy for this family, who sound like they’re having a rough go of things.

But I was surprised to read this article — as in general, I’ve been impressed by how cheap airfares have become. Back in May, I was able to fly to Europe for some absolutely obscene fair — $430, I think, with taxes. And I’ve grown accustomed to being able to book fares to the Western half of the country for somewhere in the $250 to $320 range, even on extremely short notice.

It turns out, indeed, that my experience is somewhat more typical: airfares have not been increasing, and in fact they’ve become quite a bit cheaper. Still, there are peculiarities in the pricing that tend to cater to me and my travel habits — someone who travels almost exclusively from large cities to other large cities — and perhaps not so much the Miles Family of Syracuse.

Below is a graph built from data from the Bureau of Transportation Statistics, which compiles very robust information on airfares. It reflects something called the Air Travel Price Index (ATPI), which measures airfares while controlling for service class and itinerary (so airfares won’t artificially appear to get cheaper, for instance, if an airline takes out some business class seats to stuff more people in coach, or more expensive if it begins to fly some longer-distance routes). I’ve further adjusted this data for “CPILEGSL“, which is the consumer price index (inflation) less energy items — and then divided the airports between the 25 busiest and the rest (BTS tracks data down to the 85th largest air travel market, which is Charleston, SC). 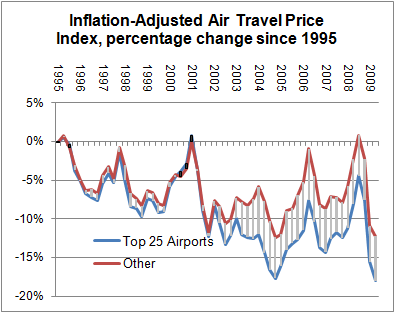 What we see, indeed, is that airfares have gotten cheaper — by about 15 percent overall over the past fourteen years (adjusted for inflation), although with some periodic spikes due to fuel prices. I know, I know: you’re paying less for worse service, given the add-on fees for everything from bottled water to checked baggage, the bizarre ritual that is airport security, and the seemingly inevitable delays. As a relatively frequent flier, you have my sympathies. But given their razor-thin profit margins, the airlines at least seem to be doing their best to pass the cost-cutting onto consumers in the form of cheaper tickets. Given the increasing presence of “discount” carriers like Southwest, JetBlue, Frontier and Virgin America in many markets, indeed they may not have a whole lot of choice in the matter. (“Discount” belongs in quotation marks, since some of these carriers — particularly Virgin and JetBlue — offer a superior coach-class experience as compared with the majors.)

We also see, however, that the larger airports, which have seen their fares decrease by 18 percent, have had it better than smaller ones, which have experienced a 12 percent decline. This appears to hold true both for secondary airports within a large market — once a bargain, they now often charge travelers at a premium — as well as primary airports in smaller cities. And if you’re traveling from one small airport to another, the price pressure may be doubly noticeable.

Suppose, for example, that I wanted retrace the Miles’ family’s route from Syracuse to Omaha, leaving on Tuesday, January 12th and returning on Friday, January 15th. The best I can do on Kayak.com is $428 on United. That’s almost 50 percent more expensive than a round trip from New York to San Francisco over the same period, which I can get for $293 with a layover in Denver (or $309 for a direct flight) — even though the distance covered is about twice as long.

The cheapest I could get from Des Moines to Gulfport, MS during this time period is $396 — and that’s with three stops on the inbound flight. But Chicago to Seattle — covering about three times the distance — is $337, and for a direct flight.

These are not cherrypicked examples — they’re just the first three random ones that I happened to try. I won’t speculate too much about the economics behind all of this — although good old economies of scale, plus the degree of competition in a particular market, surely have a lot to do with it. If you’re traveling to or from an airport that doesn’t serve as a hub or focus city for one of the major carriers, you’re probably not benefiting much from the cheaper airfares that other travelers are seeing, and you may even be paying something of a premium.

The strategy for travelers is obvious enough: if you need to end up in a smaller city, you might consider flying to a larger city instead and driving, training or busing the rest of the way. For a lot of travelers, for instance, the cheapest way to fly to Tucson may be to go to Phoenix, to Portland, ME may be to Boston, or to Omaha to Kansas City.

It also seems like some of the cardinal rules of smart travel no longer seem to apply. For instance, based on my extensive experience as a procrastinator, it seems to be quite a bit cheaper than it once was to book flights at the last minute. In contrast, the penalties for changing your itinerary are still quite steep. So if your travel plans are still coming together — you’re not sure whether you’re meeting is going to finish on Wednesday or extend until Thursday, for instance — it really may be better to wait to book your travel, rather than having to pay a change fee later. In certain cases, booking a one-way ticket and worrying about the return trip later may even be a perfectly sane strategy. (Caution: avoid either of the above if you’re coming into town for a major event that a lot of other people are traveling to — say, the Super Bowl or a political convention — since the airlines know they have you by the balls. I’ve gotten burned, for instance, trying to play it cute with the World Series of Poker in Las Vegas and the Republican National Convention in Minneapolis. This may also apply to the holiday period, where skipping or re-scheduling a trip may just not be an option.)

And because of airlines like Southwest that charge by the segment rather than by the round trip, you should no longer fear so-called open-jaw itineraries. You may pay hardly any premium to travel into Las Angeles and out of Las Vegas, for instance, or into London and out of Paris, if you can get more out of your trip this way.

All of this, assuredly, may sound a little self-serving. I tend to travel to and from large cities, I tend to book my travel late, and I’ve always been a fan of creative itineraries that combine multiple business or pleasure “objectives” (in different cities) out of the same journey. So all of these changes are working in my favor. And take the above with a grain of salt; I’m just a political blogger with a tryptophan hangover, and not any sort of travel writer. But if you’re still following the 20th Century playbook to book air travel in 2009, you’re probably costing yourself more than you think.