There are eight current national polls that list separate sets of results for likely and registered voters. (In this case, for reasons that will be apparent momentarily, I am deliberately double-counting the two Gallup likely voter models). On average, Barack Obama leads by 9.8 points in the registered voter versions of these polls, but by 7.0 points in the likely voter versions — nearly a 3-point difference: 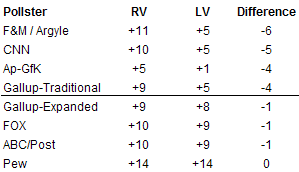 The first cluster coincides with Gallup’s so-called “traditional” likely voter model, which considers both a voter’s stated intention and his past voting behavior. The second cluster coincides with their “expanded” likely voter model, which considers solely the voter’s stated intentions. Note the philosophical difference between the two: in the “traditional” model, a voter can tell you that he’s registered, tell you that he’s certain to vote, tell you that he’s very engaged by the election, tell you that he knows where his polling place is, etc., and still be excluded from the model if he hasn’t voted in the past. The pollster, in other words, is making a determination as to how the voter will behave. In the “expanded” model, the pollster lets the voter speak for himself.

Frankly, I find polls showing a 4-6 point gap between likely and registered voters to be utterly ridiculous. Why?

1. Among people who have already voted, Democrats lead overwhelmingly. Zogby pegs Barack Obama’s advantage at 27 points among people who have already voted. The New York Times details how Democrats are overperforming, sometimes dramatically, in states where early voting is underway. (By the way, the New York Times’ data on Florida is wrong, as it includes absentee ballot requests as well as early voters. According to an Open Left diarist, Democrats have a 24-point advantage among those who have actually voted early in Florida).

2. Enthusiasm is much higher among Democrats than among Republicans. The latest Diageo/Hotline numbers show that 72 percent of Democrats are enthusiastic about voting for their candidate, as opposed to 55 percent of Republicans.

3. Most likely voter models are unlikely to distinguish newly registered voters from what I would call lapsed registered voters. If someone is registered, and has been registered for a long while, but has not cast a ballot since they pulled the lever for Ross Perot in 1992, there is good reason to be skeptical about their intentions. On the other hand, voters who are newly registered have quite literally demonstrated their interest in the 2008 campaign; they are in fact quite likely to vote. Barack Obama’s advantages are principally from among the newly-registered voter group.

4. There is an enormous discrepancy in the strength of the Republican and Democratic turnout operations. In past elections, such as 2004, this advantage favored the Republicans; in this one, it favors the Democrats. Barack Obama has somewhere between a 2:1 and a 4:1 advantage in field offices in most battleground states. He is relying almost exclusively on volunteers (the exception are a couple of cities like Philadelphia and Detroit, where Obama will most likely pay ‘street money’ to canvassers on Election Day). McCain, meanwhile, has already had to hire paid canvassers in Florida, and perhaps he will also in several other states.

I would like to issue a challenge to those pollsters like Franklin & Marshall and GfK which in spite of all the facts above, are showing a substantial shift toward the Republicans when they apply their likely voter models. E-mail me — my contact information is at the top of the page — and tell me why you think what you’re doing is good science.