Much of the commentary about President Obama’s speech on Afghanistan and the ensuing deployment of US troops has been focused on either the politics of the decision (troop bump up, then phased withdrawal) or the feasibility of the “COIN” strategy to make progress against the Taliban and Al Qaeda.

However, there are a few points — a bit more buried — that are perhaps quite important.

1. Public support for the creation of the “Contact Group for Afghanistan and Pakistan”: Buried at the end of a sentence at the end of the speech, Obama discusses the creation of a new working group of sorts with several regional powers. The biggest departure from past practice is the public inclusion of Iran in this group, who have been marginalized generally, for reasons of US general policy and accusations of selling weapons to the Taliban. While little has changed in the former, the latter has cooled a bit; Shia Iran has many axes to grind with the fundamentalist Sunni Taliban. In fact, Iran nearly invaded Afghanistan in the late 1990s for various reasons, including the killing of several Iranian diplomats.

The “contact group” concept is not new — the Germans came up with it a while back, with the support of top US military personnel — but it has received little support from the wider US foreign policy and political communities.

2. “But this is not simply an American problem”: Previous incarnations of the US President rallying behind a war strategy have often cast issues in terms of US interests, moral requirement and the spread of American ideals. Indeed, the main thrust of the wars in Iraq and Afghanistan have been directly against the operators — those who the US considered to be security threats.

Spending diplomatic and economic capital to re-couch the Afghanistan threat in global terms, a la climate change or poverty, is an important strategic decision. Al Qaeda et al. are funded from various sources, recruit from various places, and carry out activities in still other places. If the US intention is to weaken the whole network, Obama is saying publicly, the effort must be integrated rather than treated discretely.

This was attempted by George W. Bush by way of the “Global War on Terror” and “coalition of the willing” rhetoric, but it was always an obviously American-led show.

All the same, two key issues that remain unanswered and unresolved:

1. What happens, in practical terms, after the new US/NATO/UN strategy succeeds or fails?
Afghanistan has had many instances of foreign occupation, exit and power vacuum in the last hundred years, and particularly in the last thirty-five. Let’s briefly have a look: 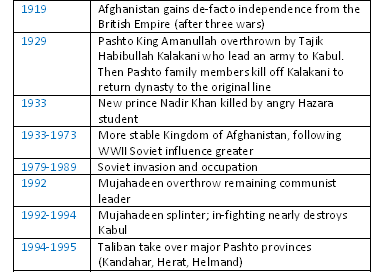 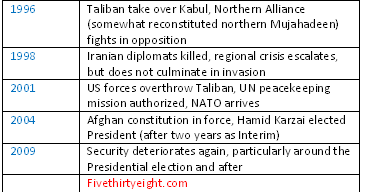 Bottom line, when the power vacuum emerges following the eventual departure of the US and its allies, who will fill it? In fact, the higher military power of the occupation that will be there when (projected) withdrawal occurs in 2011 could amplify the differential. In the past, inter- and intra- ethnic and party fighting has followed the exit of major foreign influence in the country. Even with a stronger central government, it is likely to happen again. The US and allies had better come up with a good plan.

2. The US reputation of militarism and occupation:

The fact is, even with the election of a more globally popular President, the US continues to have a reputation abroad of taking unilateral, hegemonical and militaristic decisions, with myopic and/or selfish thinking to drive them. Regardless of the veracity of the charge, this image is well embedded.

This problem of reputation, along with major problems of global poverty, backlash against globalization and the Anglo-American liberalization model that has dominated since the Uraguay round of trade talks (GATT and WTO) and the ability of militant ideas and money to fund them to move rapidly in today’s information age, has left the US between a rock and hard place.

Military action against those marked “enemy” has only further embedded the ideas that drove these individuals towards violence to begin with. Even if the American/European strategy of eliminating violent enemies with global connections in Afghanistan and Pakistan succeed, these more entrenched problems will remain unresolved.

The Obama administration has done a credible attempt to thread this needle, with a mix of reaching out to Iran, adding additional military firepower, putting diplomatic pressure on the Afghan government and setting time limits for the US engagement. However, if the transition is to be successful, reaching out in a significant way to the traditionalist Pashtos from whom the Taliban rose will be necessary (including the Taliban themselves). In addition, combating the overarching problem of globalized distrust of the US in sensitive areas, including the aforementioned growing skepticism of the US-exported liberal economic model, will have to play a small but vital role.

—
Renard Sexton is FiveThirtyEight’s international columnist and is based in Geneva, Switzerland. He can be contacted at sexton538@gmail.com