One recurring theme in the states we have profiled so far has been the exodus of Southern whites from the Democratic Party, yielding a striking transformation. The Solid South — so named for the regional hegemony of Democrats — has been reversed, and states that were once Democratic from top to bottom are becoming (or already are) equally Republican.

The evolution has progressed particularly far in the Deep South, but Georgia, Alabama, Mississippi, Louisiana and Arkansas are all at different stages.

Arkansas is reliably red in presidential elections but still elects Democrats at the local level (although for how much longer is an open question). Republicans took over at every level in Louisiana and Georgia, although in Georgia growing diversity has aroused small glimmers of a Democratic revival.

In Alabama and Mississippi, however, the last vestiges of the Democratic South were wiped away in 2010 and 2011, respectively (Mississippi holds off-year elections), and Democrats do not have any clear path back to power. 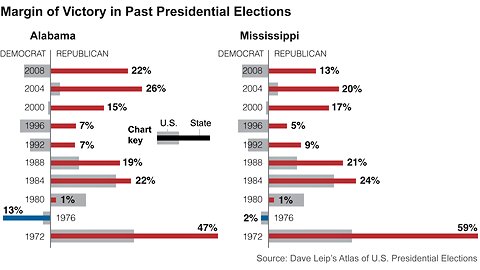 Mitt Romney is essentially assured Alabama’s nine electoral votes and Mississippi’s six. Both states became reliably Republican in presidential elections in the early 1980s, “then little by little all of the dominoes began to fall,” Ms. Davis said. In the past two years the conversion was completed: Republicans now control both states’ legislatures and virtually every statewide office.

Moreover, because of the partisan makeup of Alabama and Mississippi, Republican control will most likely prove durable. Alabama and Mississippi are the two most inelastic states in the nation; they have very few swing voters and thus are largely impervious to changing political conditions at the national level. The same dynamic that kept Democrats in power for decades now favors the Republican Party: the partisan uniformity of the white majority.

“When white voters made the switch to the Republican Party, they went wholesale,” Mr. King said.

According to 2008 exit polls, white voters represented 65 percent of the electorate in Alabama and 62 percent in Mississippi. Neither is an overwhelming majority. But Senator John McCain won the white vote in Alabama, 88 percent to 10 percent, and President Obama carried African-Americans, 98 percent to 2 percent. The Mississipi breakdown was almost exactly the same, except Mr. Obama carried 11 percent of the white vote instead of 10 percent.

Mississippi has the highest share of black residents in the nation, 37 percent, and Alabama has the sixth highest, 26 percent. But both are too low to overcome the G.O.P. advantage among white voters. 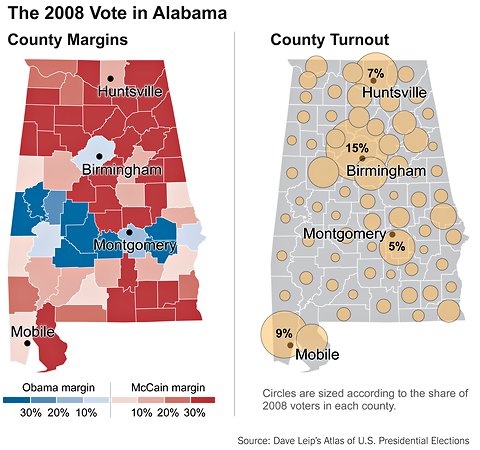 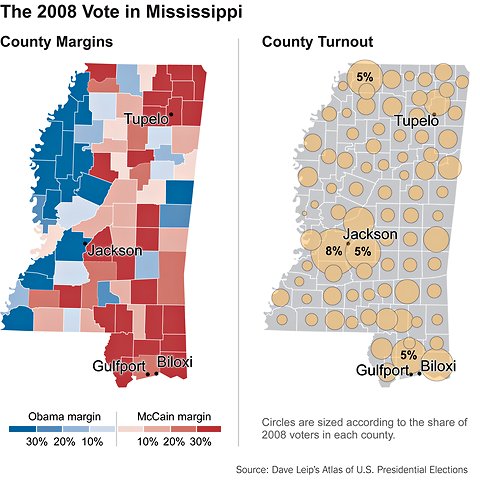 In Alabama and Mississippi, the political landscape mirrors the racial landscape: the Democratic Party is strong where African-Americans are a majority or close to a majority, and Republicans prevail everywhere else.

Democrats are dominant in Alabama’s Black Belt (named for the color of the topsoil) and the Mississippi Delta region of Mississippi. Both areas have rich soil and were large cotton producers. Today, they are predominantly African-American, rural, poor and sparsely populated.

Of Alabama’s four biggest cities — Birmingham, Montgomery, Mobile and Huntsville — Democrats are most competitive in the first two, which also have the highest share of African-Americans. In Mississippi, Republicans are a majority in all the main population centers except for Jackson’s Hinds County, which is 69 percent African-American.

Outside of the predominantly African-American areas, Alabama and Mississippi are deeply conservative and heavily Republican. (We profiled both states’ Republican electorates during the primaries. Here is Alabama. Here is Mississippi). 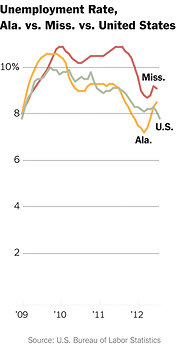 The Bellwethers: Talladega County, Ala., and Forrest County, Miss.

The best bellwether county in Alabama is Talladega County, home to the famous racetrack. Talladega County has been an imperfect barometer, however, consistently leaning several percentage points to the left of the state.

In Mississippi, Hattiesburg’s
Forrest County was just a couple of percentage points more Republican-leaning than the state in 2000 and 2004. But in 2008, Forrest County exactly matched the statewide vote.

Mr. Obama has zero chance of carrying Alabama or Mississippi, according to the current FiveThirtyEight forecast. And the local political analysts said the future looked just as grim for Democrats in both states.

Georgia’s fast-growing minority population has outpaced the growth of Republican-leaning whites, giving Democrats hope of competing there in the near future. In Alabama and Mississippi, however, the African-American population has been largely stagnant. Alabama’s Hispanic community is growing, but it is still just 4 percent of the state. In Mississippi, Hispanics are 3 percent.

A coalition of African-Americans and Hispanics could bring Democrats back from political oblivion, but only after substantially more growth in their populations takes place. As long as the white vote is so overwhelmingly Republican-leaning, Alabama and Mississippi will remain Republican-leaning as well.

And because both states have so few swing voters, “I think we’re looking at a generation, maybe 30 years, of Republican wins,” Ms. Davis said.