The White House recently touted the Obama administration’s expansion of high-speed Internet access to 98 percent of Americans, highlighting the availability of 4G mobile broadband. But availability isn’t the same as access — to take advantage of all this new 4G, you need a smartphone and a data plan.

And some 36 percent of American adults don’t have a smartphone, according to a Pew Research Center report released Wednesday. Those people tend to be poorer — half of people making less than $30,000 a year don’t own a smartphone.

Poor Americans are also more reliant on their devices when they do have them. They, along with young people and nonwhite people, belong to a subset of smartphone owners whose connection is particularly tenuous. Pew calls these people “smartphone-dependent” because they do not have broadband access at home and have relatively few options for getting online other than their cellphones.

Twenty-two million Americans are smartphone-dependent, about 7 percent of the total population. Demographics play a big role in who they are: African-Americans, Hispanics, 18- to 29-year-olds, and people from households earning less than $30,000 per year all are twice as likely as the average smartphone user to be smartphone-dependent.

Although some Internet access is better than none at all, being smartphone-dependent poses unique problems — for one, it’s more important to have a phone that functions properly. About half of all smartphone users claimed to have had problems with website display, poor or dropped signals, and apps that worked incorrectly. 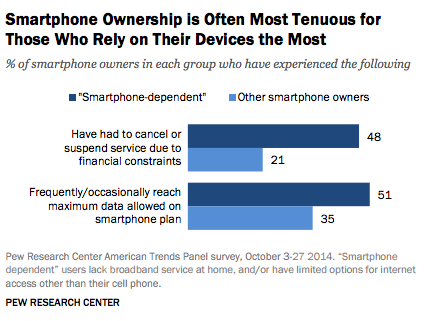 As the Internet becomes more and more central to daily life, access becomes a greater necessity. Smartphone owners from households earning less than $30,000 annually are nearly twice as likely to have used their devices to get information about a job as those from households earning more than $75,000 per year, and more than four times as likely to have submitted a job application from their phones.

More widespread 4G is great for those users — as long as they can afford it.