The capture of Dzhokhar A. Tsarnaev, 19, a suspect in the Boston Marathon bombings, has revived a debate over how terrorism cases are handled in the United States, including whether suspected terrorists should be read their Miranda rights, which include the right to an attorney and the right to remain silent, and how quickly.

There has not been much recent polling on this issue, but surveys conducted when this debate was last in the news, in 2010, found that a small majority of Americans favored informing suspected terrorists of their Miranda rights.

The most recent surveys in the PollingReport.com database were conducted after a Nigerian man attempted to blow up a Detroit-bound airliner on Christmas Day in 2009 and again after a failed car-bombing in Times Square in May 2010. Different polls asked slightly different questions, but the four polls that asked about this subject found between 51 percent and 65 percent of American adults favored advising terrorism suspects of their rights. 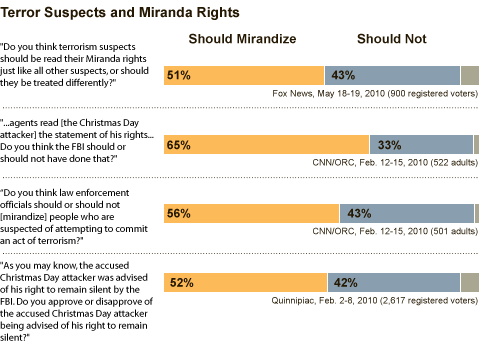 New surveys may find that American attitudes have changed since 2010, and the attack in Boston may inspire a different response. The Christmas Day and Times Square bombings both failed, while in Boston, the explosives detonated, killing three people, maiming more than a hundred and terrorizing the city for several days.

President Obama has described the Boston attack as an act of terrorism and the administration has said it plans to invoke the public safety exception to the Miranda warning, allowing the Federal Bureau of Investigation to question Mr. Tsarnaev before reading him his Miranda rights.

Still, some Republicans in Congress have pushed the Obama administration to designate Mr. Tsarnaev an enemy combatant and to try him in a military rather than civilian court.

Quinnipiac’s survey from February 2010 asked “Do you think the accused Christmas Day attacker should be tried as an enemy combatant or as an ordinary criminal?” and 76 percent said enemy combatant.

Mr. Tsarnaev, however is an American citizen, and the would-be Christmas Day attacker, Umar Farouk Abdulmutallab, was not. A closer comparison may be with Faisal Shahzad, the naturalized American citizen from Pakistan who planted a car bomb in Times Square in 2010.

The Fox News poll from May 2010 asked: “The man who police say admitted to trying to bomb Times Square is a Pakistani who recently became a U.S. citizen. Do you think he should be treated like an American criminal defendant or as an enemy combatant?” In that survey, American attitudes were more evenly split: 47 percent said enemy combatant and 45 percent said criminal defendant.