When your favorite air carrier tells you to arrive at the airport three hours before an international flight, they’re not playing around. Flying home to New York from Montreal yesterday, it took me nearly three hours to proceed from the door at Trudeau Airport to my gate. In the interim I experienced:

— A passport and credit-card swipe at the automated check-in machine;
— Being routed back to the check-in line after I was told that there were no carry-on bags permitted except for laptop bags and purses;
— A 75-minute wait at said check-in line, and then a 10-minute wait to get my checked baggage scanned;
— Being routed back yet again to the check-in counter after a traveling companion was told he couldn’t carry his laptop bag on board because it didn’t actually contain a laptop;
— An ID and boarding pass check after clearing everything up and finally being allowed to proceed to the metal detectors;
— Another ID and boarding pass check upon exiting the metal detectors and heading to customs;
— A passport and boarding pass check by the customs agent;
— A boarding pass scan upon leaving customs;
— A full pat-down and hand examination of my luggage upon exiting customs and entering the departure terminal, as is apparently now given to all US-bound customers.

Fortunately my flight, which I would probably have missed had been on time, turned out to be late. Until it wasn’t late any more … it magically disappeared from the departure monitors. About $729.24 in iPhone international roaming charges later, I found out it had been canceled. A semi-helpful Delta gate agent re-routed us onto Air Canada into LaGuardia, although only after we pointed out emphatically that Delta is not the only airline and JFK is not the only NYC-area airport. The Air Canada flight was delayed, delayed again, and then canceled, after it turned out the delay had bumped the pilot out of his duty window. Then there was another delay after Air Canada searched for a big enough plane to accommodate the bumped passengers — notwithstanding that all the cancellations had turned Montreal Trudeau International Airport into Airbus International Parking Lot. Finally, at about 9:15 — eight hours after I’d arrived at the airport — we were permitted to board, and a de-icing, a very bumpy landing, and a 30-minute taxi into the arrival gate later, we had made it home.

Not all of this, certainly, had to do with the security situation — it was, rather, a veritable perfect storm of security issues, inclement weather, red tape, a notoriously disorganized airport, and a busy travel weekend. But, seeing as how it now takes almost as much time to travel home from Montreal as it does from Los Angeles, it left me wondering once again about the costs and benefits of “enhanced” airport security.

Last week, I wrote an article that detailed just how exceedingly rare terrorist incidents aboard commercial airlines are. What I didn’t do is to compare the current situation to that of previous eras. Fortunately, there is quite a lot of data on this subject, particularly from the matter-of-factly named website PlaneCrashInfo.com. From their database, I compiled the number of passenger fatalities resulting in each decade from three types of incidents: sabotage (i.e. bombings), hijackings, and pilot shootings (which are much rarer than the other two types; just three in the database). Collectively, I term these Violent Passenger Incidents or VPIs; they are the things we might hope to prevent via tighter airport security.

In the 2000s, a total of 469 passengers (including crew and terrorists) were killed worldwide as the result of Violent Passenger Incidents, 265 of which were on 9/11 itself. No fatal incidents have occurred since nearly simultaneous bombings of two Russian aircraft on 8/24/2004; this makes for the longest streak without a fatal incident since World War II. The overall death toll during the 2000s is about the same as it was during the 1960s, and substantially less than in the 1970s and 1980s, when violent incidents peaked. The worst individual years were 1985, 1988 and 1989, in that order; 2001 ranks fourth. 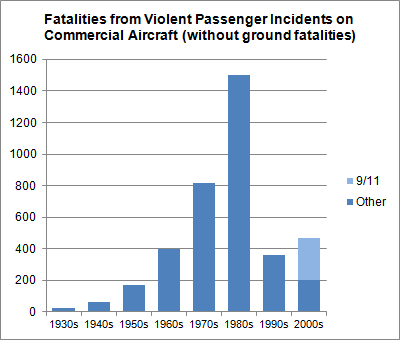 Of course, there is a lot more air travel now than there was a couple of decades ago. Although worldwide data is difficult to obtain, U.S. air travel generally expanded at rates of 10-15% per year from the 1930s through 9/11. If we assume that U.S. air traffic represents about a third of the worldwide total (the U.S. share of global GDP, which is probably a reasonable proxy, has fairly consistently been between 26-28% during this period), we can estimate the number of deaths from Violent Passenger Incidents per one billion passenger boardings. By this measure, the 2000s tied the 1990s for being the safest on record, each of which were about six times safer than any previous decade. About 22 passengers per one billion enplanements were killed as the result of VPIs during the 2000s; this compares with a rate of about 191 deaths per billion enplanements during the 1960s. 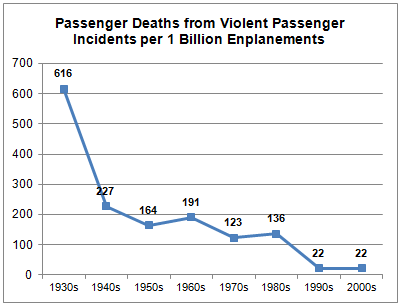 But 9/11, of course, did not just kill people on the planes. Rather, nearly 3,000 of our citizens were murdered, the vast majority of whom were literally just going about their business in New York City or Arlington. If we include ground deaths in the total, we get a rather different picture, with the 2000s in fact being the worst decade on record. 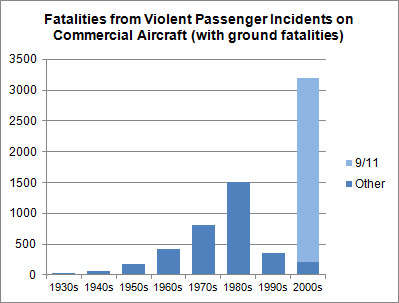 As much as anything, however, this speaks to the tragic uniqueness of 9/11. Since the beginning of commercial air travel, a total of about 6,500 people have been killed as the result of Violent Passenger Incidents — nearly half of those, or 2,995, came on 9/11 itself.

Without necessarily wanting to render any “predictions”, it seems to me that the loss of life that occurred on the ground on 9/11 would be very hard for Al Qaeda or any other terrorist group to replicate. The reason is that the last line of defense against the terrorists has also proven to be the best, and that is the passengers. Brave passengers thwarted the hijacking attempts aboard United 93 and Qantas 173, and sabotage attempts aboard NWA 253 and AA 63 (the Shoe Bomber incident). In addition, the innovation of secure cockpit doors and increased scrutiny of suspicious persons at flight school make a literal repeat of 9/11 unlikely — and if worse came to absolute worse, the domestic air defense system could also be scrambled.

I don’t mean to be glib about the risk to the passengers on the jets themselves, but 12 out of every 13 innocent deaths on 9/11 were to people on the ground. And even if the deaths at the WTC and the Pentagon are included, the rate of deaths from Violent Passenger Incidents during the 2000s qualifies as relatively “normal”, comparable to or slightly lower than the death rates in the 1940s through the 1980s. In fact, with the exception of the 1930s, when there wasn’t really enough commercial air travel to provide for a sufficient sample size, and the 1990s, a decade which was a positive outlier in so many ways, the death rate from VPIs has been remarkably constant from decade to decade. 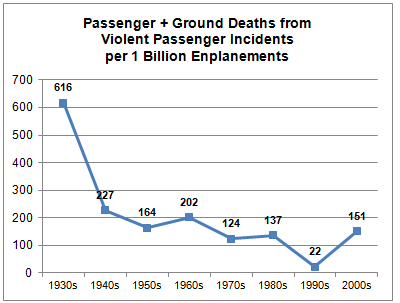 This is not necessarily meant to be interpreted as a call for laxer airport security. The mitigation of deaths from Violent Passenger Incidents can just as easily be read as a success story, of sorts — although just as clearly some of the latest “innovations”, like taking off our sneakers, or permitting passengers to carry on a bag if it contains a laptop but not if it doesn’t — are theatrical, ineffectual, and otherwise asinine.

It does seem to me, however, the singular focus on Al Qaeda is obscuring an understanding of the bigger picture. From the very dawn of commercial air travel, it was inevitable that some idiots — whether acting alone or in concert — might think it a bright idea to hijack or detonate passenger jets. We might not think of all such villains as “terrorists”. There are a number of stories from the 1950s and the 1960s, believe it or not, of people blowing up commercial jets to collect life insurance. These people were profoundly evil, but would meet no reasonable definition of terrorism.

Fortunately, they have been exceedingly very few in number. They are arguably becoming rarer rather than more common — and they are arguably becoming easier to detect. Airline security inherently involves trade-offs, and one is not likely to win very many arguments in Washington complaining about inconvenienced travelers, or reduced tourism to Vancouver, Montreal and Toronto. But let’s at least analyze these trade-offs rationally, and not let the terrorists terrorize us any more than we must.