Although the story hasn’t quite yet broken through to the dead-tree media, some influential online writers are starting to pick up upon the fact that strength in the primaries is not necessarily so strongly related to strength in the general election. Noam Schieber noticed that the same Strategic Vision poll that had Clinton leading by 18 points in the Pennsyvania primary had Obama performing a couple of points better against McCain in the general election. MSNBC’s First Read discovered this too.

Meanwhile, Rasmussen Reports has put out a whole number of polls this week that show Obama running at least as well as Clinton in so-called “Clinton states”:

Each of these are states that Clinton won (California), “won” (Michigan), or presumes to win (Pennsylvania). And yet Obama is running better than her in four of the six polls, and is tied with her in the other two. In the interest of full disclosure, it should be pointed out that most of these Rasmussen polls were taken mid-week, before the Jeremiah Wright story really hit the media. As of this writing, ironically, Obama outperforms Clinton in both the Rasmussen and Gallup primary tracking polls — but Clinton slightly outperforms him against McCain (by small margins in all cases).

It might help to abstract the situation and consider the rest of the electoral cycle from the perspective of Instant Runoff Voting. Suppose you asked each voter to rank her choices — Clinton, Obama and McCain — from one to three. There are six possible permutations — and each of them can reasonably be associated with one or another demographic group, or at least a stereotype thereof.

2. Obama-Clinton-McCain. The most likely order of preference for blacks, young voters, and progressives and other “latte liberals”.

3. Clinton-McCain-Obama. This ordering may be fairly common among two groups: Southern Baptsits and other evangelical Democrats, and some older voters.

4. Obama-McCain-Clinton. Probably a common ranking for independents, as well as some anti-establishment (and anti-Clinton) voters to the left and center of the political spectrum.

5. McCain-Clinton-Obama. According to Mark Blumenthal, this was a common ordering in Mississippi. A lot of Republicans may have voted tactically in the Democratic primary — but unless they were lying to exit pollsters, it also appears that they genuinely preferred Clinton to Obama as their #2 choice. I think we’d find the majority of social conservatives in this group, especially in the South, as well many national security conservatives, and a significant minority of suburban women.

6. McCain-Obama-Clinton. On the other hand, I’d guess that most economic conservatives and many libertarians end up here, and certainly most right-leaning independents; also perhaps some anti-Bush and anti-war Republicans.

So, these are the six fundamental classes of voters. Of course, you could get more technical than this if you’d like. For example, we’ve neglected those voters who might vote for one and only one candidate; I suspect the decision rule for some black voters, for instance, is “Vote Obama, otherwise sit out”. But sticking with these groups, it is fairly easy to manipulate the numbers so that we can produce pretty much any result we like — including primary results that differ substantially from general election results. We might hypothesize the following distribution of voters in Pennsylvania, for instance: 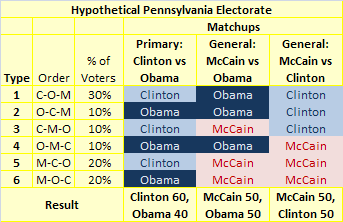 In this case, we have a plurality (30%) of Type 1 voters — mainline, working-class Democrats who prefer Clinton to Obama, but Obama to McCain. That sounds a lot like Pennsylvania. And what happens? We have Clinton winning 60-40 in a match-up between Clinton and Obama. Both both Democrats draw 50 percent of the vote against McCain. (The eagle-eyed among you will notice that we have McCain-preferring voters voting in the Democratic ‘primary’, but since we have them splitting their votes evenly, it shouldn’t matter very much).

On the other hand, in Mississippi — where Obama beat Clinton in the primary, but Clinton has done better against McCain in general election polls — perhaps the electorate looks like this: 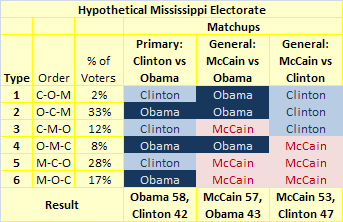 Each state is going to have its own unique fingerprint. In Nevada — where Obama significantly outperforms Clinton in general election polls — you probably have a lot of Type 1’s (Clinton-Obama-McCain) but also some Type 4’s (Obama-McCain-Clinton). In Illinois, where Obama beat Clinton easily, but both Democrats trounce McCain, there might be a lot of Type 2’s.

This is not to say that there is no relationship between voting in the general election and the primary. If we compare the Obama-Clinton margin in the primaries in the states that have voted so far (counting Florida but not Michigan), to the current differences in general election polling in the fivethrityeight.com modified polling averages, we certainly can see some correlation: 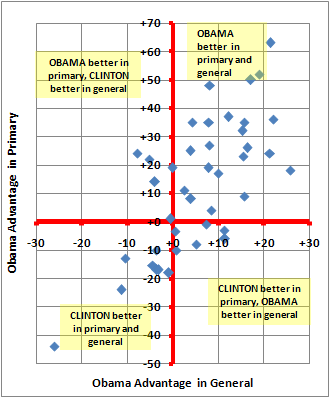 However, there are also enough differences that a state can wind up in one column in the primaries and another in the general — including particularly those states that are close enough to begin with where such differences are likely to matter. Following are our present win percentage estimates in all the states where Clinton claims victory (including Florida and Michigan, as well as Texas, but not states like Pennsylvania that haven’t voted yet):

We see Clinton running more strongly by notable margins in Florida, Tennessee, Arkansas, and New Jersey, and slightly stronger in Massachusetts and New York. On the other hand, Obama does considerably better in New Mexico, Nevada, and New Hampshire; a reasonable amount better in Michigan, and a little bit better in California.

There are some Obama states, like Georgia and Utah, in which neither Democrat really has a chance. And there are also a couple — like Mississippi — where the general election advantage tips to Clinton. However, there is also a group of about a half-dozen states — Virginia, Washington, Minnesota, Wisconsin, Colorado, Iowa — in which Obama has a substantial advantage over Clinton in general election polling, as well as some longer shots like North Dakota and Alaska. All together, Obama projects to get 112.7 electoral votes out of “Obama states” to Clinton’s 74.1 — close to a 40-EV advantage.

For the time being — and that is an important caveat, because these numbers may be changing even as we speak — Obama has at least a 15% advantage in win percentage over Clinton in 18 states totaling 113 electoral votes:

And Clinton has at least a 15% advantage over Obama in five states totaling 64 electoral votes:

For Clinton to win an electability argument based on the polls, she’d have to be much more likely than Obama to win states like Michigan, Ohio, Pennsylvania, California and New York. But presently, that is not what the numbers show; the Democrats either perform about equally in those states (as in Ohio and Pennsylvania), or the states are unlikely to be contested in a competitive election (as in California — where Obama is actually outpolling her — or New York).

Clinton, certainly, can make other sorts of electability arguments not based on the polls — but those are really the only arguments available to her for right now. And one argument she can’t make is to point reflexively to the primary results; we have a robust enough set of general election polling now that such arguments are out of date.