Back in May, we introduced something which I like to call the Specterometer. This is simply the percentage of the time that Arlen Specter is voting with the Democrats on what I refer to as Contentious Votes — anything that comes up for a floor vote in the Senate and where the majority of each party splits their votes.

In the first month or so after becoming a Democrat, Specter was voting with his new party about two-thirds of the time on these Contentious Votes. While there are some less loyal Democrats — say, Ben Nelson of Nebraska — who only vote with their party about half the time, this was certainly less than what most Democratic observers were hoping for.

But since then, indeed, something has changed. Well, a couple of things have changed. On May 27th, Congressman Joe Sestak announced that he intended to challenge Specter for the Democratic nomination. And since that time, Specter has voted with his party on 28 out of 29 Contentious Votes, or 97 percent of the time. 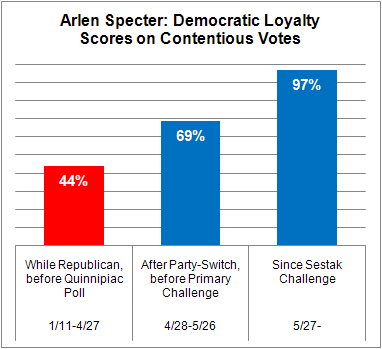 Specter’s overall party loyalty score since becoming a Democrat — counting votes both before and after the primary challenge — is 87 percent. This contrasts with the 44 percent of the time that he broke ranks to side with the Democratic on Contentious Votes while still a member of the Republican Party. He’s basically been behaving like a mainline, liberal Democrat.

Notice, however, that I did not say Specter has become a mainline, liberal Democrat. On the one hand, it makes sense that Specter might have been hedging his bets early on after becoming a Democrat, siding with the Republican on a few issues to avoid looking like too much of a craven flip-flopper. He wasn’t going to come out with guns blazing the next day with bills to enact single-payer health care and to prosecute George W. Bush for war crimes. He was going to wait until the spotlight was shining a little less brightly, and then begin to vote somewhat routinely with his new party.

On the other hand, it’s hard not to imagine that this process has been strengthened, accentuated, catalyzed, by Joe Sestak’s primary challenge. You can draw a pretty clear line in the sand from when Specter went from sorta, kinda Democrat to OMG totally! Democrat, and it coincides with the date that Sestak announced his challenge.

The real question is how Specter will behave if and when he wins the primary challenge, and the pressure from the left is off. This is especially so now that some polling shows Republican Pat Toomey, who forced Specter from the GOP in the first place, competitive against him in the general election.

Indeed, Specter appears to be just as capable of reacting to pressure from his right as to his left. In reviewing Specter’s votes, I noticed that there was also something of a breaking point while he was still a Republican. In the first part of the year, after Barack Obama had carried his state by 10 points last November, he was voting with Democrats quite often, including on key measures like the stimulus package. But once the primary pressure from Toomey had begun to heat up — as emphasized by a shocking March 25th Quinnipiac poll that put Specter 14 points behind his Republican rival — he had become quite conservative, voting with Democrats only 16 percent of the time in his final month or so as a Republican. 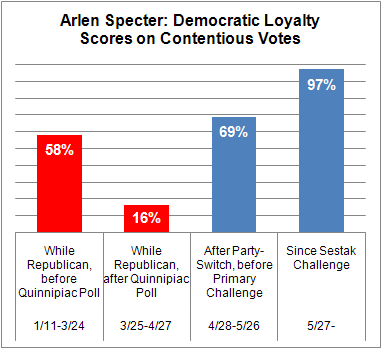 On the one hand, all of this is pretty rational — at any given moment, Specter was making moves that would seem to have maximized his chances of survival. On the other hand, it seems to have triggered plenty of fatigue with voters, who just can’t be sure what they’ll get if they vote to re-elect him. Arlen Specter is either just about the best reflection or the worst reflection on the state of our Democracy — it’s just hard to say which one.