President Obama’s self-described “evolution” on same-sex marriage — from opponent to proponent — appears to be catalyzing a similar shift among some of his most loyal supporters, African-Americans. Although evidence for such a shift is preliminary — there are just a few data points and a number of caveats — Mr. Obama’s announcement may have accelerated the acceptance of gay marriage among blacks.

Support for same-sex marriage has been growing in the general population since at least the mid-1990s. That trend has been evident among blacks as well — but at a considerably slower pace. A poll conducted by Pew Research in April, just a few weeks before Mr. Obama’s announcement, found 39 percent of blacks supporting gay marriage and 49 percent opposing it. By contrast, a plurality of white Americans supported gay marriage in the Pew poll, as they have in most other recent surveys. 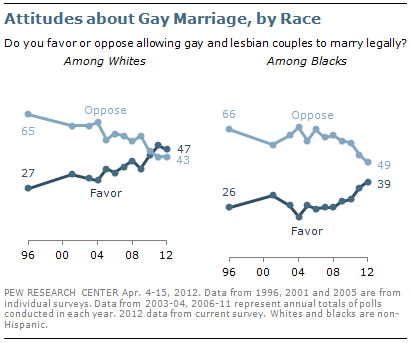 Since Mr. Obama declared his support for gay marriage, however, and similar pronouncements by the N.A.A.C.P, Jay-Z and Colin Powell, a handful of polls suggest that opinions in the African-American community are shifting.

There is reason to be cautious in interpreting these numbers. First, polling has tended to overestimate support for same-sex marriage ballot referendums by about seven percentage points. In addition, the sample sizes for demographic subgroups like African-Americans are small, producing large margins of error.

Moreover, voters who are newly converted to a candidate or cause may support only tenuously at first and may be persuaded to revert to their prior position. “People should expect a counterargument,” Andra Gillespie, an associate professor of political science at Emory University, said.

It may also be the case that Mr. Obama’s announcement did not change minds so much as it made it easier for African-American voters to express support for same-sex marriage publicly.

A study conducted last year by Melissa R. Michelson, a professor of political science at Menlo College in California, and Brian F. Harrison of Northwestern University, “It Does Matter if You’re Black or White: Race-of-Caller Effects on Black Support for Marriage Equality,” tested whether the race of the telephone interviewer made a difference in whether an African-American respondent would express support for same-sex marriage. As the study’s title suggests, it did.

At the very least, the signs of a jump in black support for gay marriage suggest that black voters are unlikely to abandon Mr. Obama over his same-sex marriage stance, as some commentators had predicted.

“I certainly want to see several more polls. But if these kinds of early signals are being sent, then we could see a significant transformation on same-sex marriage in the African-American community,” J. Michael Bitzer, a professor of political science at Catawba College in North Carolina, said.