A couple of weeks ago, I was at the first of many weddings I have coming up. And while each reception is different, there’s a pretty specific corpus of music that wedding bands and DJs return to again and again. One staple is “Shout,” the 1959 song by the Isley Brothers. Because I have no sense of rhythm or coordination, this song presents a minor issue for me:

What’s the proper rate of descent during the “a little bit softer now” portion of the song “Shout?”

In case you’re unfamiliar, dancing to “Shout” is basically the easiest thing in the world. I don’t have a head for anything much more complicated than orchestrated flailing — “Cha Cha Slide” is my cue to hit the bar — so “Shout” is a musical oasis because it involves putting your hands up and jumping when you hear the word “shout,” and that’s about it.

Except there’s a part when the song implores dancers to — wait a minute — take it easy, and then slowly descend to essentially a squat.

Here’s some archival footage from the documentary “Animal House” demonstrating what I’m talking about (this version of “Shout” is performed by Otis Day and the Knights):

Anyway, I’m terrible at timing that. I always end up way too low way too early. It’s a problem. I either have to just sit there until the section is over or say “screw it” and basically get on the floor.

This is definitely a non-scientific sample, but, on average, people dropped to a little less than 60 percent of their full height when asked to get into the “softest” position they’d want to be in at the end of the “a little bit softer nows.”

There are 17 repetitions of “a little bit softer now” in the song. Let’s say you want to be at your full height on the first and at your lowest on the last. You’ll need to drop 15 times. How much should you drop each time? 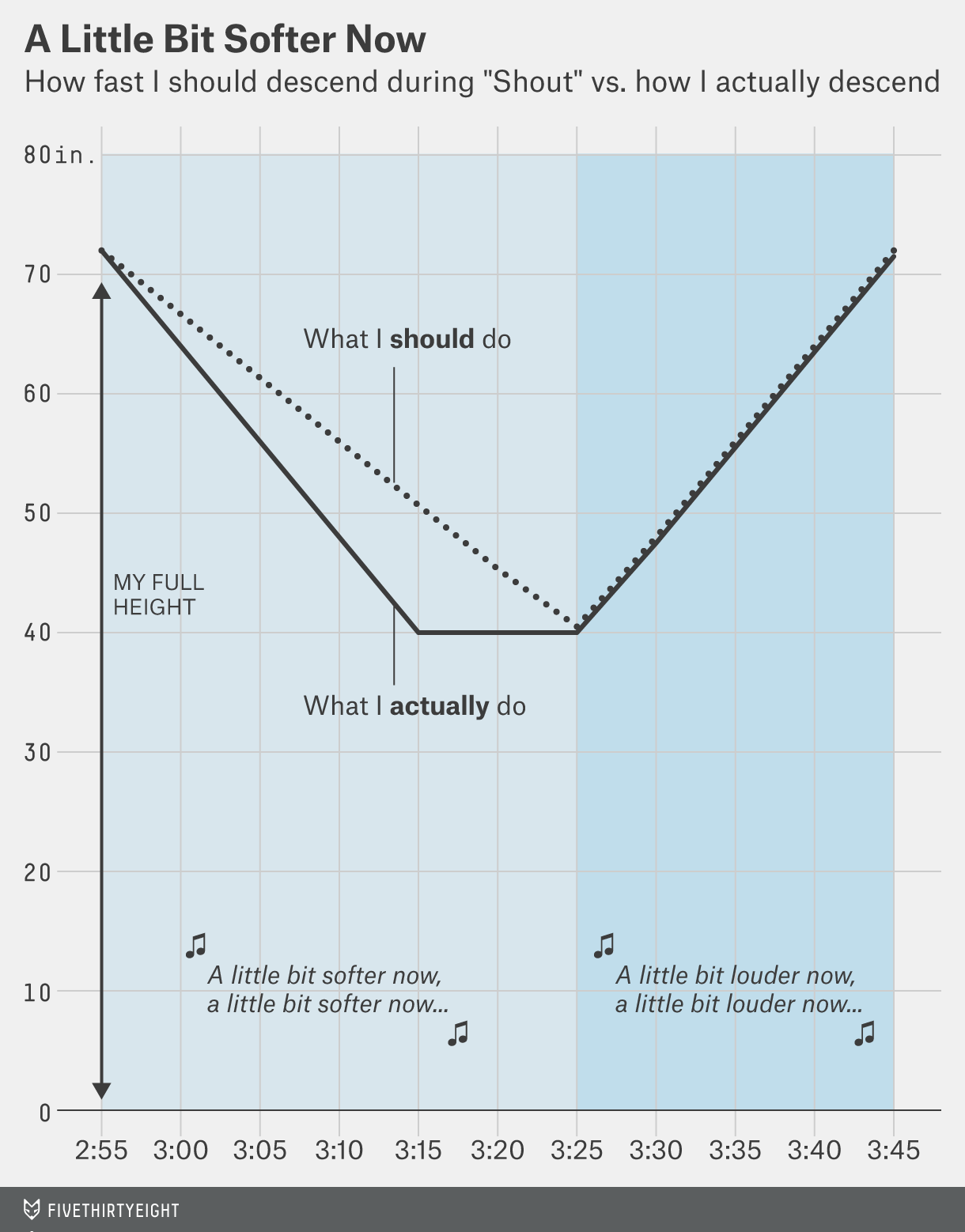 Here’s the best rule of thumb I could figure out: Take your height in feet and divide it by three, and descend that many inches on every “a little bit softer now.” I’m about 6 feet tall, so I should drop by 2 inches with every “softer now.”

Plugging this metric in for the 15 colleagues and roommates who participated in this experiment, the average difference between their ideal end point and the predicted end point was 2.4 inches, which wasn’t that bad. If you’re a flexible person, descend a little faster. If you’re less flexible, descend slower.

Because nobody wants to be this guy on the floor.